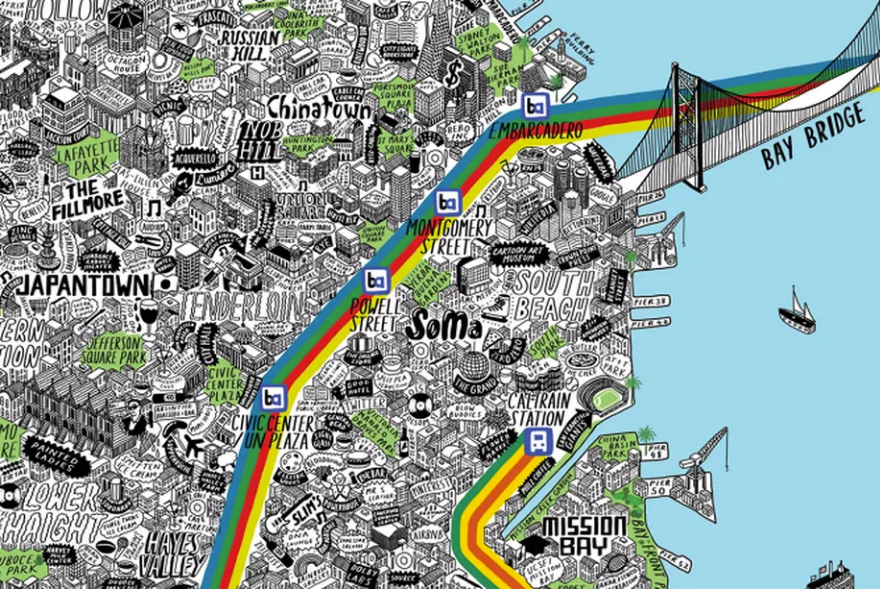 A city is a complex thing, an alloy of history, culture, architecture, nature, and the invisible lines that create a society.

Unless you’re London-based artist Jenni Sparks, in which case a city is a series of very visible lines, painstakingly drawn by hand on a tablet over a series of weeks and then rendered in an underground comic art style of swirling landmarks and blobby neighborhood names.

Sparks’ expansive and somewhat dizzying version of San Francisco (it’s best not to operate any heavy machinery after staring directly act it) took two months, plus an additional month of research, culminating in a trip out here to see the place herself. She hit on the unlikely but cool hand drawn maps racket in 2012, when the DIY art and design site Evermade.com commissioned her to draw a map of London for the 2012 Olympics.

“It was one of my first real commissions, and it was a pretty steep learning curve. I drew it all on a tiny laptop while sitting on my bed,” Sparks recalls. The London map was a hit for Evermade, so ever since Sparks has been running around the world, doodling major municipalities.

Drawing San Francisco line by line would be an intimidating task, even for someone who knows the city already. But our natural geography was a help, since the prominence of the bay gives us a distinctive, blobby profile to fill in. (Sparks says it was also nice just having a lot of color on the screen. Note the streaking rainbow slashes of the BART and Caltrain lines as well). 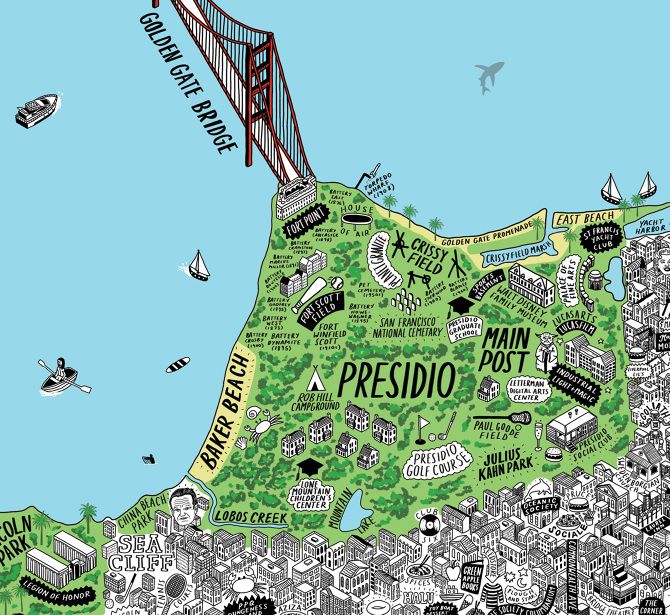 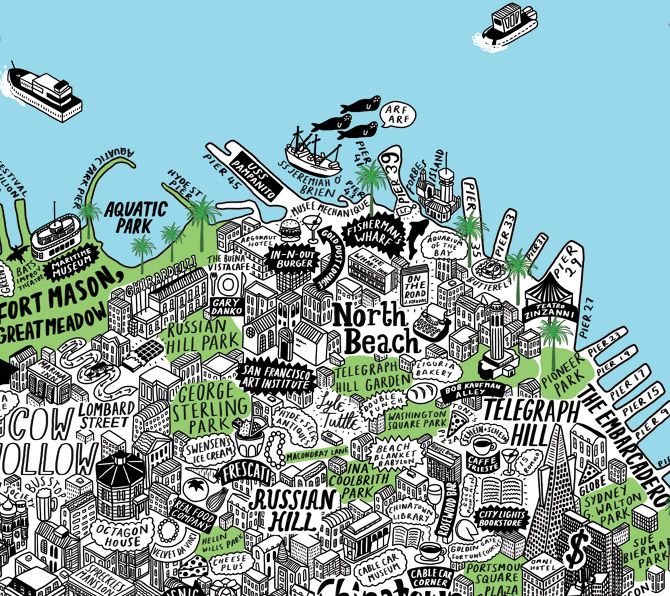 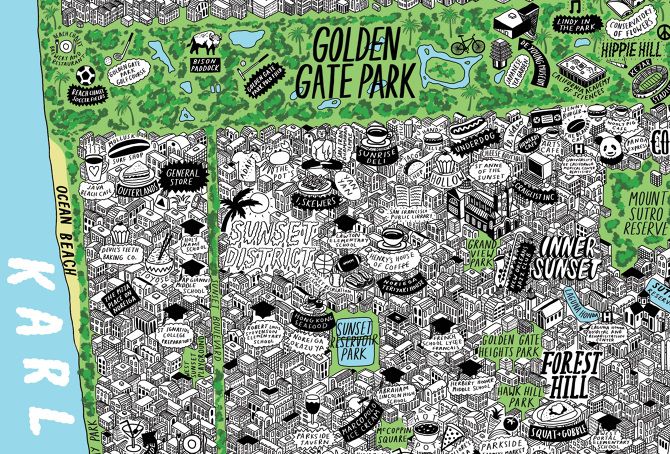 In the end, the only problem (other than that she neglected to book her Alcatraz trip in advance and found it sold out when she got here — a classic rookie mistake) is that her art style made it basically impossible to include most of the hills, and consequently the city looks as broad and flat as, well, a map. Honestly though, this is a potentially attractive change, in spite of what it does to the views, and the fact it puts the Wiggle out of commission.

The jostling, weird, chaotic soup of Sparks’ illustrations is a handy testament to the city’s outré vibe and history. Of her visits, she says she found us friendly, outgoing, and chill — but also anxious and somewhat combative when talking about topics like city identity and changing times. Well, she’s got our number.

The map, as well as Sparks’ other work, is still available on Evermade.com. If it keeps selling, maybe we can lean on her to come draw Oakland next. 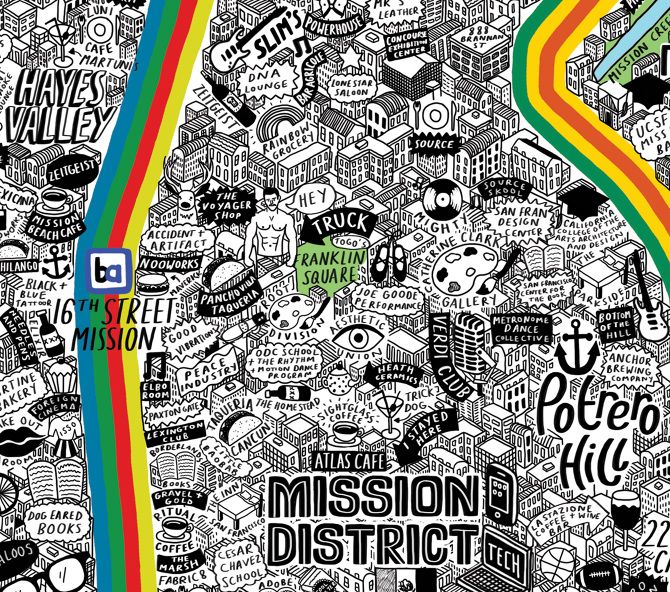 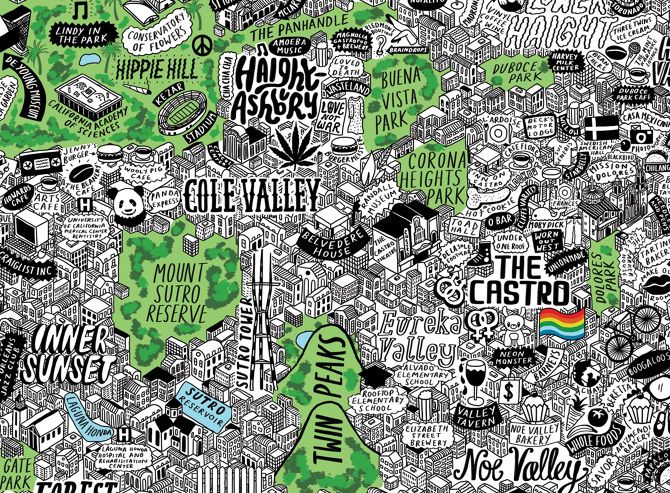 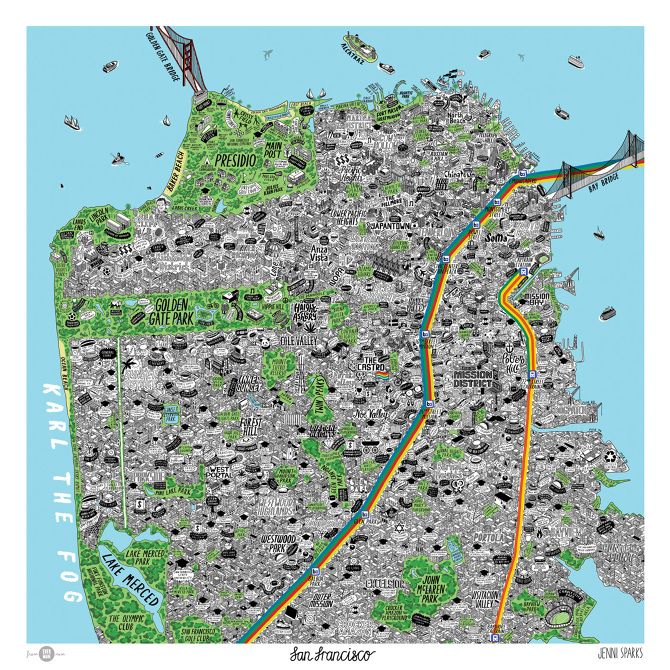