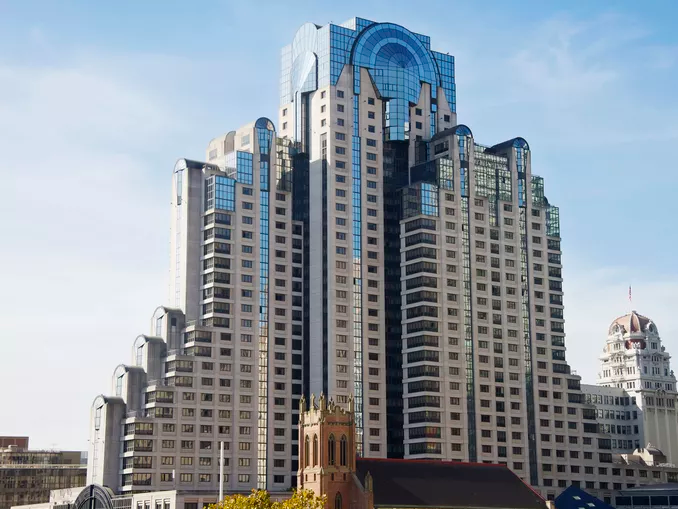 While San Francisco is home to some of the cutest darn architecture in the country—e.g., Victoriansgalore, cottage row in Pacific Heights, the “Four Seasons” in the Haight—we also have a few worrisome, downright unsightly structures.

We asked Curbed SF readers to chime in with their least favorite eyesores. And chime they did. Everything from the new LinkedIn building to the polarizing Federal Building were tagged.

Here now is a map of the most atrocious buildings in San Francisco, at least according to Curbed SF readers.

“The InterContinental Hotel looks like a humidifier. Additionally, the semitransparent facade offers up a view of the unsightly window treatments that seem to all be open at different widths, which gives the appearance of broken windows. It is such an eyesore and I hate it.” — Sally Kuchar, Curbed Cities Director

“1455 Market Street, no question. So much wrong here… too much mass and bulk, almost no fenestration on one side, black-tinted windows, brutalist-style concrete skin. I sigh with disgust every time I look at it for longer than 20 seconds.” — SParkford

“I hate the windowless AT&T bunker [in SoMa],” noted hunterrible. But reader Midcentman liked the structure, saying, “It’s not a windowless building. Look again. But what this building houses is telephone exchange equipment on all floors. It was designed in the early ’70s by the prominent firm of MBT Associates, and won several national design awards. It’s very slick expression of pure modernism and functionality.” San Francisco’s most polarizing building has to be the federal building in SoMa. Many like it, many detest it. “90 7th Street is so much worse than 450 Golden Gate,” notes Curbed SF reader Calfan, who adds, “I actually used to work at the 450 Golden Gate federal building, and until I saw it on a list of ugly buildings it never occurred to me that it’s anything other than unremarkable.” SFkevin also chimes in, noting, “Tried to love it. Hate it more with every passing day. Simply god-awful.”

“The Brutalist-greenhouse mini mall on the SW corner of Polk and California has always been my least favorite non-residential building in SF. Barf, barf, barf.” — Peter Lawrence Kane “Fox Plaza just because it is the tallest, widest, yet by far the ugliest building in its neighborhood.” — don116

“The west-facing side of One Rincon looks like a futuristic TV remote control. Again, it’s a shame because its the tallest building in that neighborhood and is the most prominent building in SF’s south facing skyline (since you can’t see TransAmerica from most angles in the south-east part of the city)” — don116

Morning appointment done, getting home in time for breakfast.

Well, I think the power substation on 8th Street is simply terrifying. There are a lot of people who will praise this particular building, and they’re entitled to their opinion. I think it looks like the place Skeletor would stash political prisoners. PG&E has a teeny bit of an image problem (cough cough) at the best of times, and this can’t possibly help.” — Adam Brinklow (Curbed SF associate editor) “You really must drive/ride past the red stucco trash at Woodside and O’Shaughnessy to see this poorly constructed, presumedly hand built mess. So ugly, cheap and without any finesse at all,” said Realestatey. “Yes, other structures are more visible and loom large. Yet this subtle wart of a building truly offends.” Reader keenplanner agreed, asking, “Who approved this P.O.S.?” “I avert my eyes every time I pass 1880 Pine St. Especially in contrast to the elegant Victorian next door.” — SFhouselover “My vote for ugliest building in San Francisco has been (and always will be, until the next big earthquake knocks it down), the Hall of Justice.” — sfkevin

“The Marriot Marquis on Mission near Yerba Buena Gardens always was and remains at the top of the ugly heap,” says citicritter. And reader keenplanner agrees, bemoaning, “The only way it got thrown up was that the area was tagged a ‘redevelopment zone’ by SF when they wanted to bulldoze all the old SROs to build Moscone Center. The redevelopment designation allowed it to skirt SF planning rules. I want to paint big targets on the side.”

Another polarizing piece, many cringe at Yerba Buena’s latest offering. ” ‘Darth Vader,’ such an eyesore in SOMA. I do like the reflection from the glasses but the architecture and color looks too simple and too black,” says wphuang.

“For me the Hilton FiDi on Kearny @ Washington easily wins this contest. Worse yet, I live on that block and that’s the view from my front steps.” — oatmeal33

“555 Pine is hands down the most hideous. I wish I had never noticed this building and its pitifully tiny number of windows.” — grantaleo “Not to say these buildings do not look good on the inside, but outside they are underwhelming for the most part.” — pamipampers “Don’t love the blue tiles, especially the side you see getting off the freeway.” — pamipampers “US Bank on Mission and 24th Street is an eyesore!” — WEA

Not even open yet and folks are already untrilled about the impending Salesforce Tower. Don116 says: “. Salesforce Tower when it’s finished. It has a weird, almost oblong yet unmistakably phallic shape. It’s Pelli’s worst rendition of his obelisk design (his tower in Hong Kong and Santiago are much nicer compared to Salesforce Tower). Really a shame the city didn’t go with the SOM design for the transbay tower. It will also be the tallest building in the city, so everyone will get to look at it all the time!”