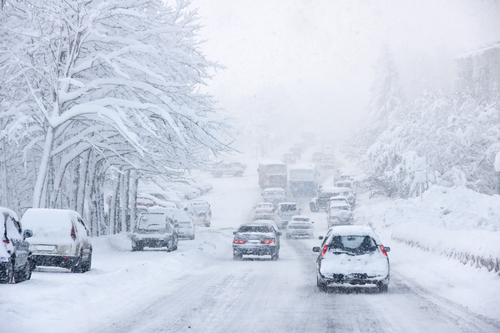 A fierce winter storm pummeled the northern Sierra Nevada over the weekend, burying ridge tops around the Tahoe Basin in more than three feet of snow in a 48-hour period.

Caltrans reported whiteout conditions on roadways throughout the Sierra Nevada Sunday into early Monday, creating major delays for those traveling over the mountain range.

National Weather Service meteorologist Emily Heller says, “This was a typical California storm,” but the timing of it moving across the region when many were slated to return home after the holidays made the impact especially huge.

ABC7’s Melanie Woodrow was among those trying to get home to the Bay Area on Sunday after a weekend trip to Tahoe and reported on a 12-hour nightmare for the news station. At one point, it took her seven hours to drive a mere 13 miles.

Truckee resident Jeremy Thomas says it took him five hours to drive from West Shore back home, a trip that usually takes one hour.

“Skiing was off the hook amazing in the backcountry yesterday though!” he wrote in a message to SFGATE. “Almost worth the 5-hour drive!”

Snowfall reached elevations as low as 3,000 feet in the Sierra foothills with Pacific House on Highway 50 recording an inch.

Heller says most areas of the Tahoe Basin received one to two feet in 24 hours and more than three feet in 48 hours.

Light snow flurries are in the forecast for the Tahoe Basin through Monday at noon and conditions should clear in the afternoon, providing skiers with a window for enjoying all the fresh powder.

Another winter storm is slated to sweep the Sierra Tuesday night into Wednesday.