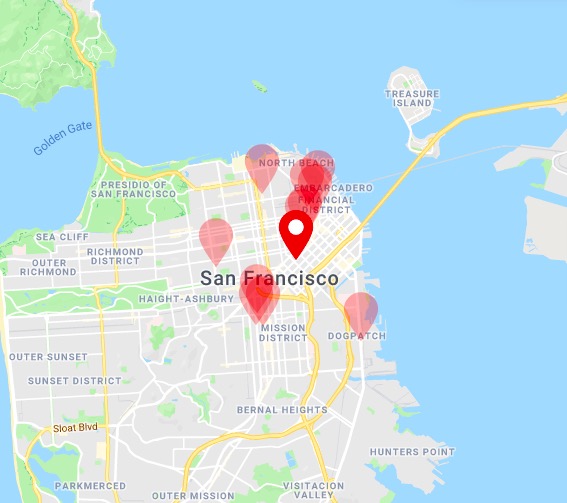 Tipsters, readers, friends and family of Eater usually all have the same question: Where should I eat right now? Restaurant obsessives want to know what’s new, what’s hot, which favorite chef just launched a sophomore effort, where to sip the cocktail of the moment. And while the Eater 38 is a crucial resource covering old standbys and neighborhood essentials across the city, it is not a chronicle of the ‘it’ places of the moment. Thus, we offer the Eater Heatmap, which will change continually to highlight where the foodie crowds are flocking at the moment — even if that might be an older spot.

Map points are ranked West to East, not ranked.

Just a few months after shuttering Theorita, the Che Fico team flipped the space into Che Fico Alimentari, a warm and inviting casual Italian restaurant with retail space for wine, salumi, bread, and pasta. Dine on a dinner menu that’s different, but very closely related, to its upstairs sibling, with fresh pasta and plates like braised short rib with polenta.

Chef Aaron London’s follow-up to AL’s Place is a fast-casual mashup of Jewish deli culture and Middle Eastern flavors. It’s Dolores Park-adjacent in a bright space filled with pops of color. Stop by for pitas filled with smoky brisket and fluffy falafel, accompanied by a treasure trove of sauces like stone fruit amba, schug, and green tahini. Do not miss the potato hot pocket, which is most easily described as a hashbown stuffed with things like smoked salmon, cream cheese, red onions, and capers. Beer and wine are available.

Elda is a cocktail bar, but it’s a cocktail bar with food that’s worthy of its own recognition. The menu is short but packed with bold pan-Caribbean and Latin bar food that is more than just a snack. The fried chicken sandwich on milk bread, dripping with chamoy, is a great example; chicken tostadas with black sesame mole and Jamaican beef patties with plantain dip are excellent accompaniments to a glass of natural wine, local beer, or cocktail.

Non-Outer Richmond residents who are fans of Fiorella’s Neapolitan pizzas, pastas, and plates like wood-grilled pork chops are now in luck. The Polk Street restaurant is serving all the favorites, plus more pasta and charcuterie (including a pie topped with housemade mortadella), beer, wine, and low ABV cocktails like spritzes. It’s open for dinner in the former Gioia space, which has received a dark-hued, hip makeover.

A pizza-flavored spinoff of the ever-popular Mission restaurant Flour + Water has arrived at the corner of Valencia and 18th. It’s walk-in only with a a roomy dining room, patio, and bar for consuming pizza, mozzarella sticks, chopped salads, soft-serve, and spritzes. It’s all available for takeout, as is the takeout-only “big slice,” which is half a pie folded and handed over for $8.

From pop-up to permanence, Square Pie Guys is now regularly churning out square pies in flavors like pepperoni, chicken Caesar, and summer elote corn. The pies are the draw, though the menu includes wings, salads, sandwiches, and a very good burger, too. Don’t sleep on desserts like the monkey bread with caramel dip and whipped cream.

Chef Tomonori Nagai (Morimoto, Shinji by Kanesaka in Singapore) has opened an upscale omakase restaurant in Union Square, serving a set menu of fresh fish for $200-250 (check with the restaurant to ensure accurate pricing). It’s a hushed, traditional setting with only ten seats, plus sake, wine, and beer offerings.

There’s a lot going on at this ambitious project from French chef Claude Le Tohic and the team behind Alexander’s Steakhouse. The first floor holds a patisseriewith macarons and other baked goods. On the second floor, the Bistro & Grillserves light lunch fare and dinner options like roasted duck and steak tartare. Next floor up is Elements, a cocktail bar with experimental cocktails and food available from the bistro below. Finally, the top two floors are home to O’ by Claude Le Tohic, a fine-dining restaurant serving $250 ten course prix fixe menu focused on classic French cooking techniques and California ingredients.

On the second floor of Mister Jiu’s, Moongate Lounge is bringing a luxe party vibe to Waverly Place. Dim sum is the main snack category, with pig trotter ham sui gok, oysters with hawthorne jelly, and Alaskan king crab rangoon. There’s also an impressive list of cocktails based on the lunar calendar, and well-curated list of natural wines to drink in red velvet booths, or at the marble-topped bar.

Beneath 52 floors of companies like Morgan Stanley and Microsoft lies the Vault, a new upscale restaurant from the team behind Trestle and the now-closed Stones Throw. Classic cocktails mingles with chef Robin Song’s menu of dishes described as “Americana,” with comte grilled cheeses at lunch and beef tartare, oysters, and wagyu beef short ribs at night. Expect a busy FiDi lunch and happy hour crowd, when the martinis and Manhattans flow.

The lovely, European-style wine bar from the team behind Quince and Cotogna is here, with natural wines by glass or bottle, pates, meats and cheeses, and larger plates like duck confit. There’s also a retail bottle shop, and conservas (tinned fish) from Spain, Portugal, and beyond. It’s open late on the weekends, too.

Not only is this bagelry producing excellent wood-fired bagels, it’s also making its own butter and cream cheese daily and serving Red Bay Coffee roasted on-site. Bagel sandwiches filled with gravlax, pastrami, and bacon, egg, and cheese, and bowls of “matzoh” ball soup (the balls are made of bagels) are just a few of the items found at breakfast and lunch. Pro tip: Don’t sleep on the bagel dogs, which are served after 11 a.m.

Yes, cocktails are stars here, mixed by local bar legend Jennifer Colliau and her team. But, the full menu of inventive food was designed by chef Jordan Grosser to match the drinks, ranging from snacks like potato chips with whipped ricotta and salmon roe, fennel, and radish, to kobe beef bavette steak with Japanese rice, cucumber, shiso, and black garlic aioli. And, the kitchen is open late, til 1 a.m. on weekends and 12 p.m. weeknights.