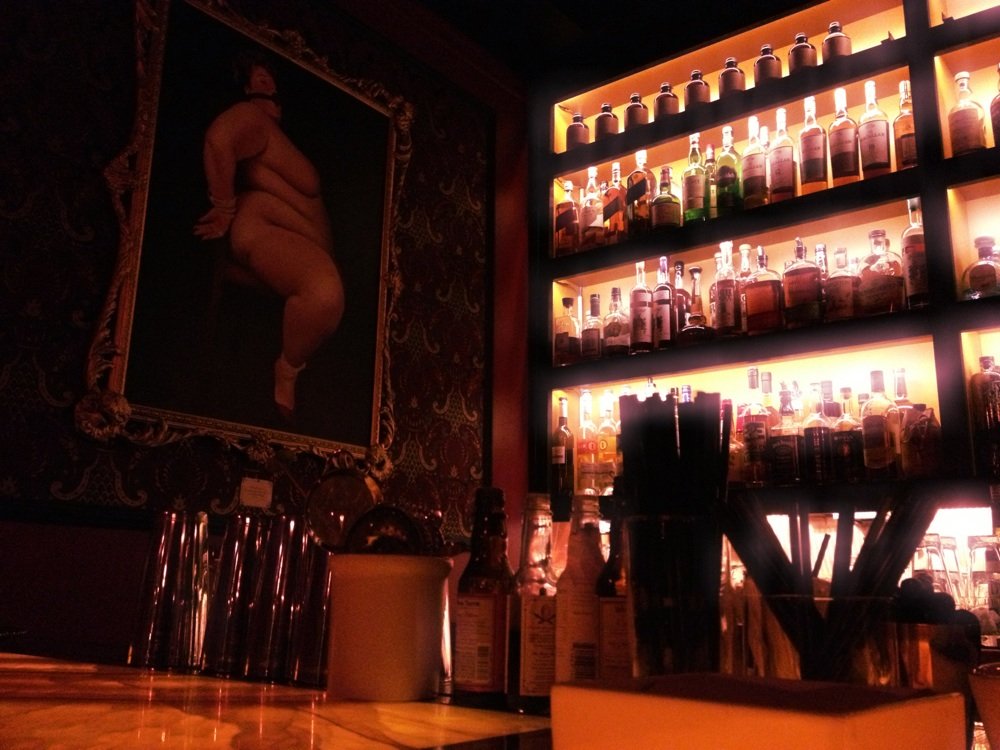 You might remember when we did a list of the weirdest restaurants in San Francisco. Something we realized is that the weirdness certainly doesn’t stop at eateries—there are plenty of drinking establishments in this town that up the ante on oddness, too. Here are places you can drink in SF and have a not-so-usual experience. 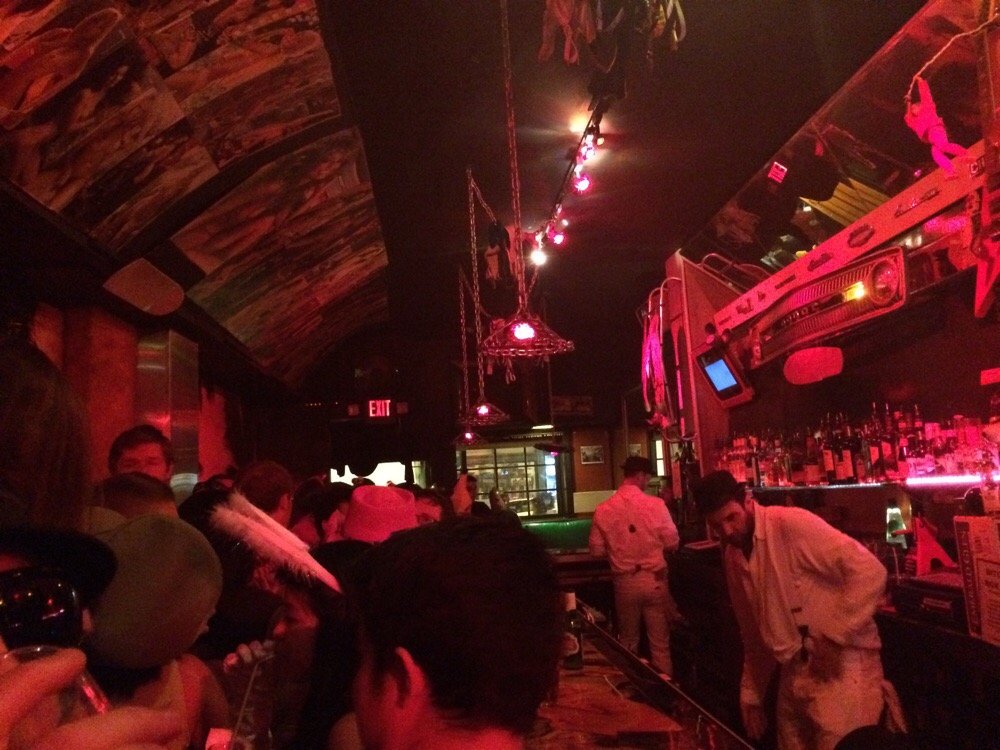 This place has dangling dolls that watch over you from the ceiling, eyeless mannequin heads, creepy babies staring at you from across the room, and weird portraits that are too bizarre to describe. If you can distract yourself enough from the decor, it also has insanely good sangria. 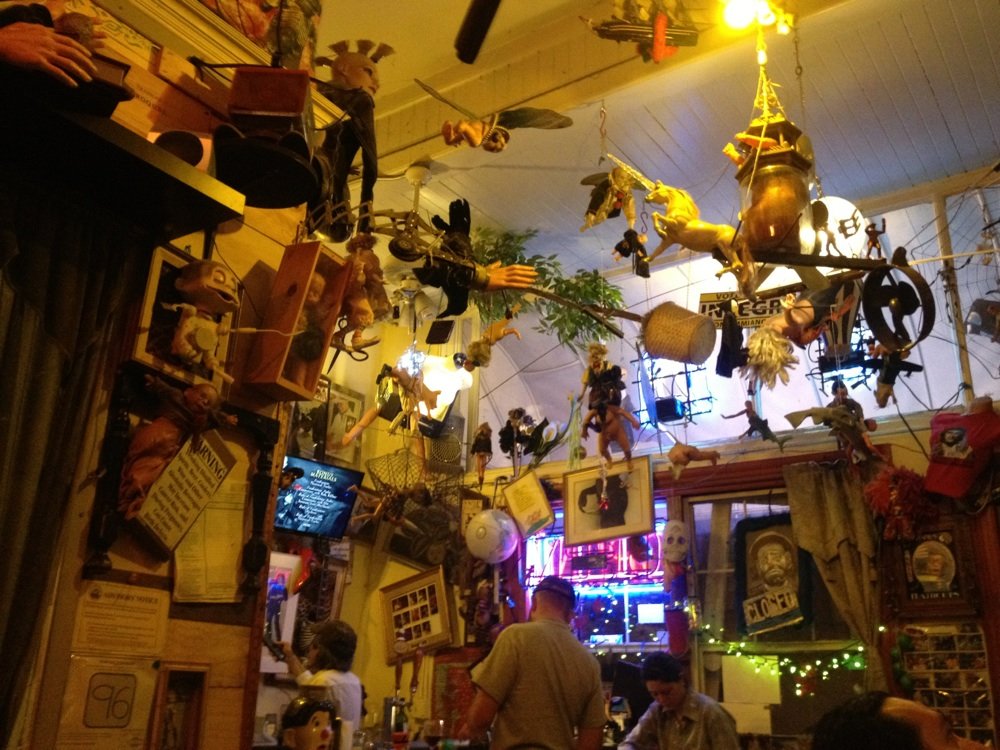 It’s not weird for what they serve so much as who they are honoring. This place is the ultimate tribute to San Francisco’s greatest eccentric, Emperor Norton, who we’ve talked about in great detail here. Salute SF’s greatest emperor while drinking in front of a giant mural of his portrait, and don’t be weirded out by the bouncer behind glass out front (yes, it’s a mannequin of Emperor Norton). 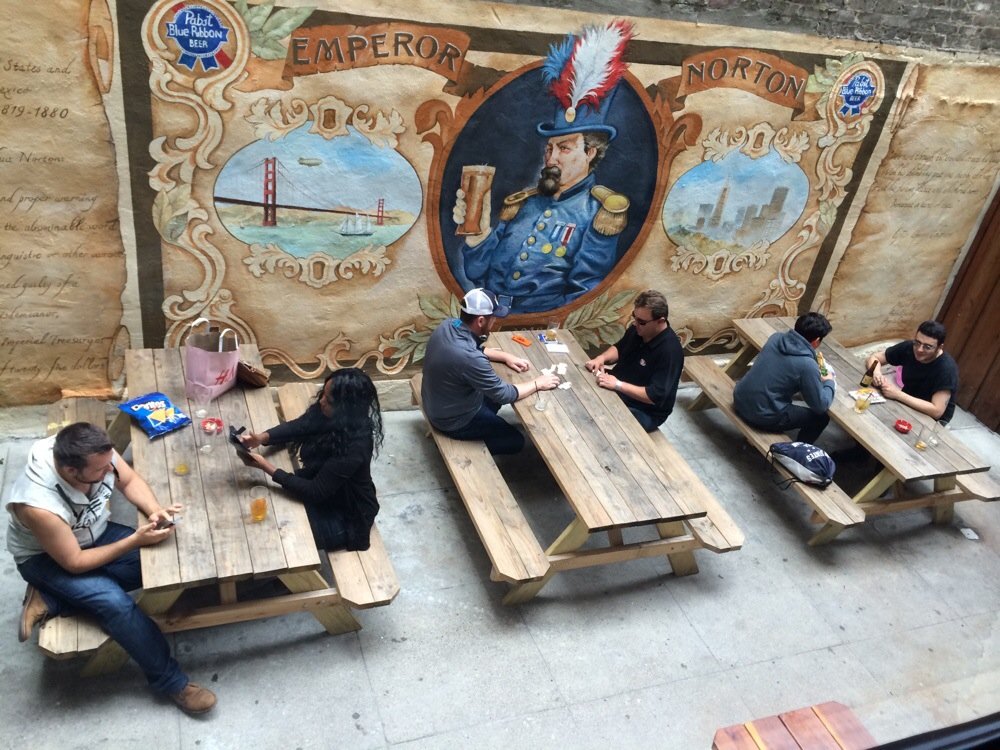 At first glance, this place will seem like your average upscale cocktail bar. But it’s their dedication to the steampunk theme that earns them a spot on this list, with a bar made of an old conveyer belt, lamps made of glass filled with Thomas-Edison lightbulbs, and a giant strange, quirky contraption that looks like something out of an old-timey science lab they use to make drinks. Pro tip: there’s a secret bar called SRO at the back, which they call a “craft-cocktail fantasy bar” and is worth looking into. 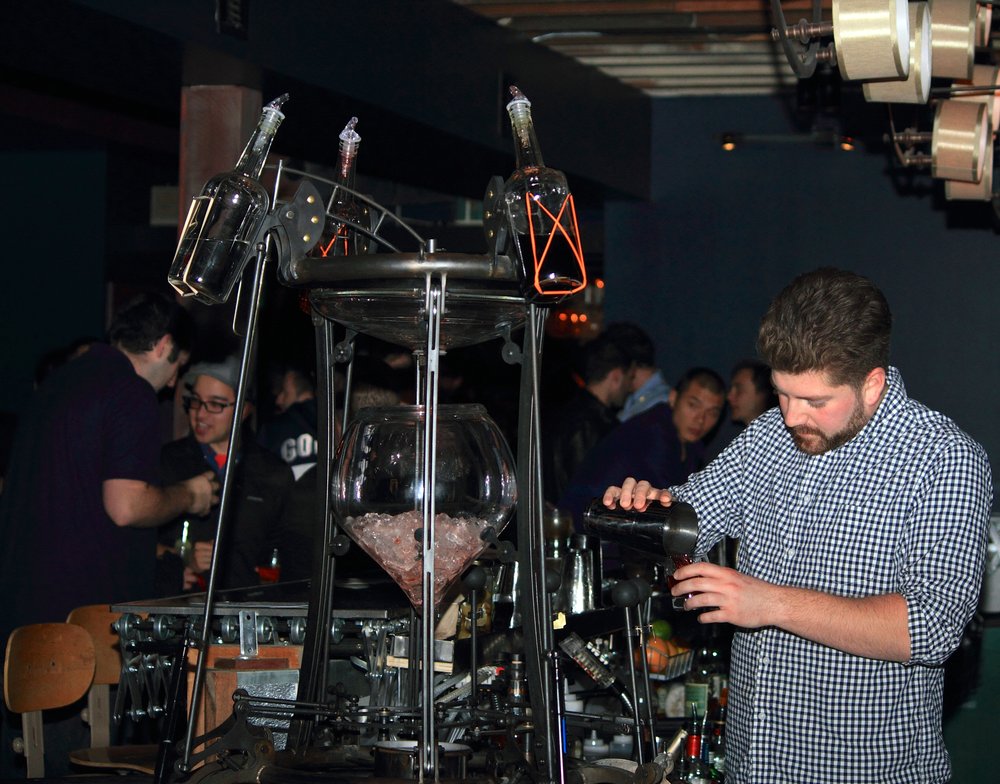 5. The Interval at Long Now

This bar located in Fort Mason is like a library/museum/bar mashup—which makes sense, as it was converted from a 1930s forge and machine shop. There’s a planetary display featuring all the planets visible from Earth; a chime generator, or a mechanical computer that generates a unique bell sequence each day for 10,000 years; and an extensive library featuring books, as they say, that were selected for “their value in sustaining or rebuilding civilization.” The bar menu is also written on graph paper, which adds a fun touch to the science-y feel of the place.

It’s bar with a fun house theme! You’ve got your fun house mirrors, your circus lights, your tiny clown statues everywhere, bar stools shaped like giant springs, and what looks like toys up in the ceiling. Sometimes, the bartenders even wear bow ties. It’s either your idea of a great trip back to childhood…or possibly your worst nightmare from it. You decide! 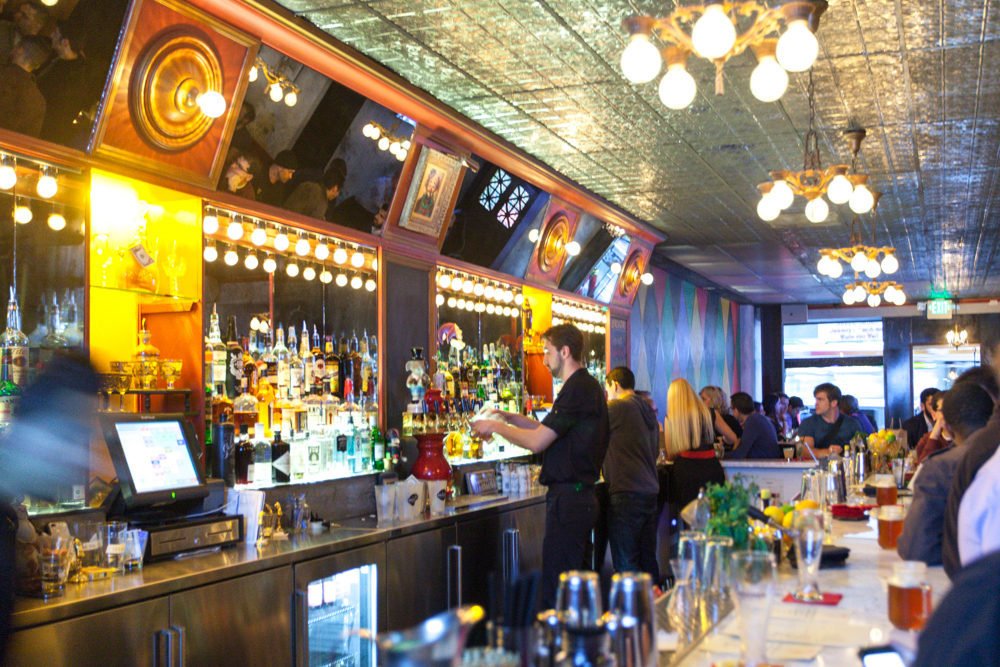 This place is almost quite literally a hole in the wall. Though it’s got somewhat of a Great Britain theme, you can think of it more like hanging out in someone’s garage. There are about eight seats total in the bar, and beer is handed to you in cans and bottles out of coolers below the bar. (There is nothing on draft.) In spite of the quirks, the place is almost always packed. It’s a social bar, as you’ll be sidled up next to your neighbors and bartenders the whole time, so be prepared to get to know who you’re drinking with, as the bartenders will definitely start chatting if you’re lucky enough to grab a seat. 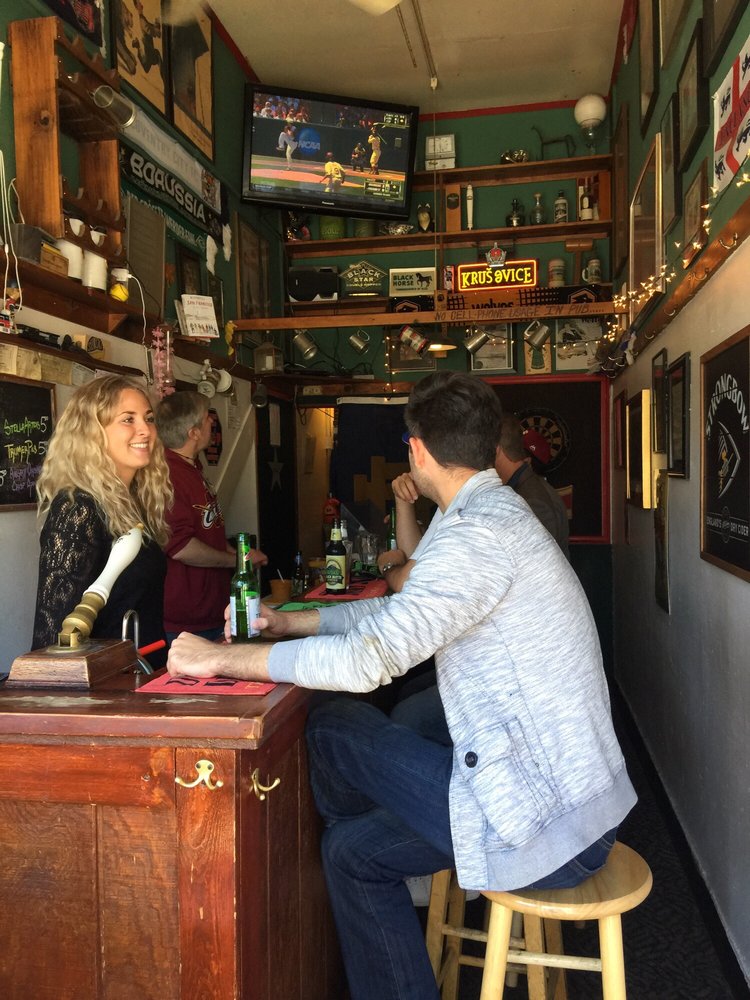 The vibe here could best be described as “trailer trash,” but that’s what people love about it. You’ll catch jello shots passed around on trays, actual 40’s served at the bar, drinks made with Squirt and Welch’s grape soda, mini corn dogs, chicken nuggets, tater tots, deep fried Twinkies, and jalapeno poppers, which they recommend pairing with “a tall can of Coors light.” You WILL see people dancing on the bar at some point in the night, so just go on in and be prepared for a wild ride. 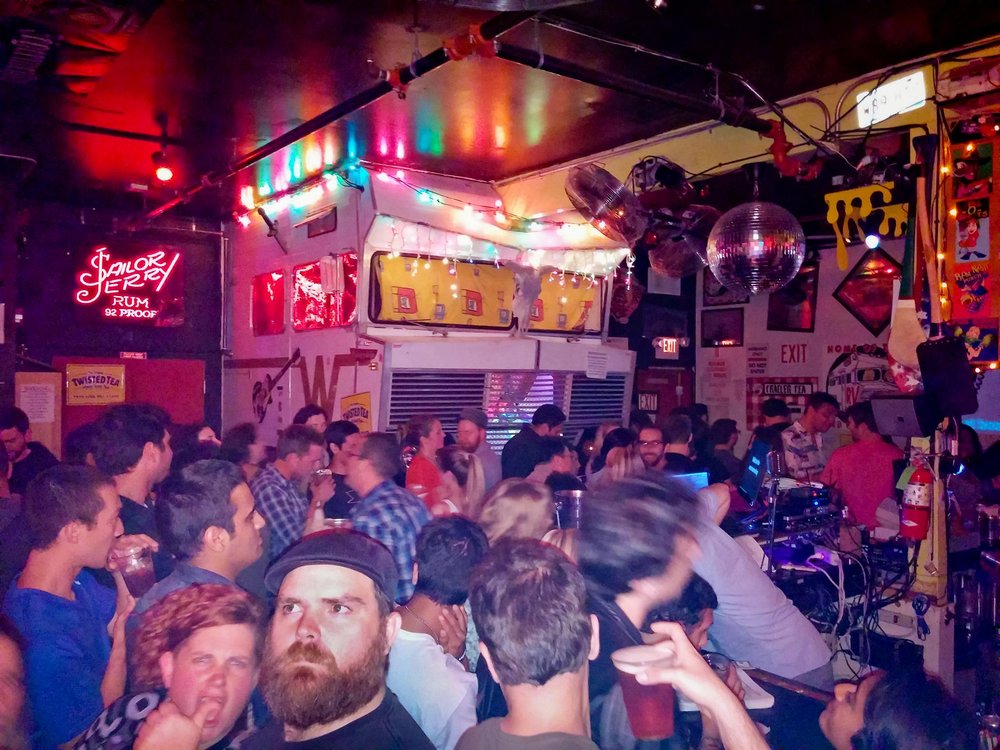 This place is weird simply because there’s a giant hole in the wall right behind the bartender, and there’s an acrobat that performs inside of it while bartenders pour drinks. They also sometimes project old-timey movies on the wall, which is cool, but not as weird. 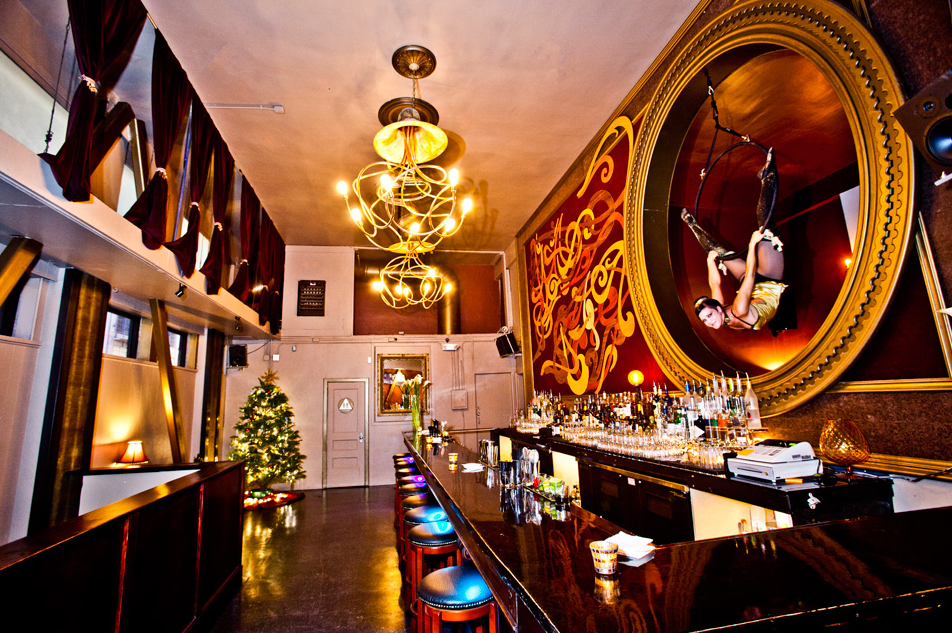 A dive-y gem in North Beach that, as you might have guessed, is decorated in historic memorabillia. Right across the street from City Lights Bookstore, it is very old San Francisco, decked out in an eclectic array of oddities from all over the world. As one Yelp user describes it, the “walls are a dense rainforest of the archane and obscure: Egyptian sarcophaguses, stuffed mongooses attacking stuffed cobras, and god-knows-what else you have makes you the bastard child of the British Museum, Ripleys’ Believe-it-Or-Not.” Stop in to discover its history and charm. 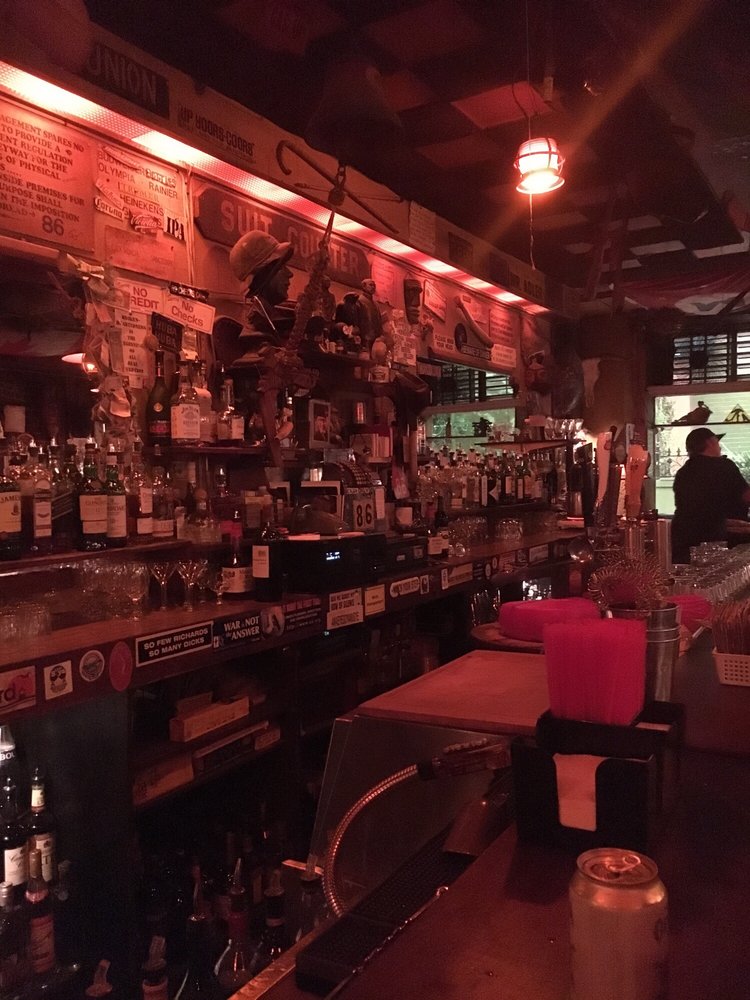