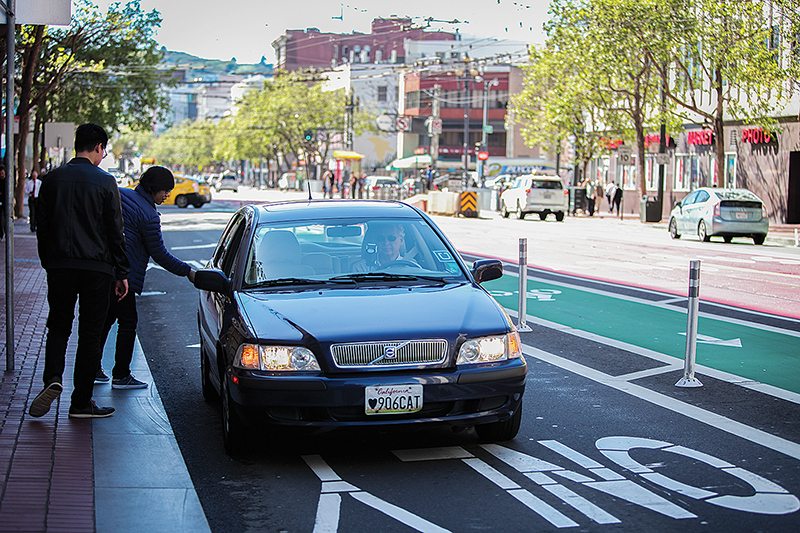 The potential 45,000 Uber and Lyft drivers circling San Francisco streets for commute fares are gumming up city traffic, according to transit officials.

In a recent state regulatory filing, the San Francisco Municipal Transportation Agency took the California Public Utilities Commission — which is tasked with regulating ride-hail companies — to task for failing to reasonably limit the industry’s explosive growth.

“The commission’s prior and current rulemaking process clearly has had a significant environmental impact,” including increasing carbon emissions due to more Uber and Lyft cars on the road, the SFMTA wrote to the commission last week.

Neither Uber or Lyft responded to requests for comment.

The CPUC has since 2012 moved to regulate ride-hail companies like Uber and Lyft, which are officially known as Transportation Network Companies in California. They are legally distinct from town cars, taxi cabs and limousines.

Much to the chagrin of taxi drivers citywide, Uber and Lyft drivers are regulated far less than traditional taxis — an unfair playing field, they argue.

The SFMTA’s regulatory filing mainly concerned the legality of Uber and Lyft drivers using rental cars as personal vehicles to drive passengers, an ongoing debate at the CPUC that the commission may vote to resolve this month.

The SFMTA argued that since state regulators and the CPUC are moving to make rented and leased vehicles legal for Uber and Lyft drivers, any legal distinction separate from for-hire limos and taxis is essentially bunk.

And the lack of ride-hail regulation has led to San Francisco congestion, the SFMTA argued.

“For example, in San Francisco alone an estimated number of 45,000 Uber and Lyft drivers now operate in The City,” the SFMTA wrote, citing a recent San Francisco Examiner article that revealed data showing the number of ride-hail drivers.

In 2016, San Francisco was rated as having the third-worst traffic congestion in the nation, the SFMTA argued.

“Much of the increase San Francisco has experienced in vehicular traffic can be attributed to the huge increase in the number of [ride-hail] vehicles operating on city streets,” the SFMTA wrote.

Notably, no study has been completed to study Uber or Lyft’s effects on San Francisco traffic, although UC Berkeley’s Transportation Sustainability Research Center and the Natural Resources Defense Council’s Urban Solutions program have initiated a study to analyze the climate and environmental impact of Uber and Lyft in San Francisco as well as other cities.

That study is expected to be released sometime early next year.

Kate Toran, head of taxi services at the SFMTA, told the Examiner local control of the ride-hail industry would give San Francisco more flexibility in easing local conflicts stemming from Uber and Lyft.

“I think there’s a role for local enforcement and local regulation,” Toran said. “The impacts happen locally. It would make sense to have an enforcement mechanism locally.”