A cadre of San Francisco chefs have been scheming for months to make their latest creation as stale as culinarily possible.

They have learned through years of trial and error that rock-hard cookies and candy are the preconditions to making a 22-foot-tall gingerbread house, thought to be the largest in California. After all, if an edible home stands for nothing, it will fall for every 2-year-old child picking at its gumdrops.

“The harder the gingerbread is, the easier it sticks to the house,” said Kimberly Tighe, executive pastry chef of the Fairmont Hotel, where the latest holiday creation was unveiled in the lobby Saturday. “If it’s soft, it’ll actually start to peel up. That’s why it’s made in September and why I can’t understand how anyone would want to eat it.”

Nonetheless, within hours of the official opening, slabs of gingerbread close to the ground had been noticeably licked, picked at and sampled. At adult-level, the walls had been thoroughly leaned on by moms, dads and grandparents snapping photos and waiting for tots to make their way through the insides of the tasty-looking mansion.

Nearly 8,000 pieces of gingerbread, 1,200 pounds of icing and 650 pounds of candy went into making the giant gingerbread house this time around. Underneath the sweets are plywood, two-by-fours, masonite and all the other normal ingredients that go into building a home.

The construction materials are reused every year, and the edible parts all composted, Tighe said.

“It was a lot easier this time because last year when we took it down we actually labeled them and put them in order,” said Noel Zavala, a hotel engineer who built the non-candy portion.

After the home’s completion, Zavala’s job was to keep an eye out for any broken lights, keep the mechanical Santa legs kicking out from the chimney and watch the toy train, should a naughty child ever knock it off the tracks, a semiregular occurrence.

The worst-kept secret around the Fairmont Hotel is that for every pound of candy on the gingerbread house there is another pound waiting in storage. Peppermint canes, gingerbread men, jelly slices, Christmas tree marshmallows and gumdrops are all biding their time behind the scenes for their brethren to be plucked away by an unsupervised child. Then, twice a day for four hours, pastry repair crews cordon off the house to replace what went missing.

“We’ll close it off so people aren’t coming through,” Tighe said, briefly pausing to sigh in disapproval as she spotted a family taking pictures of their toddler pretend-eating the home. “The first year I was here, people would realize, ‘Oh, the frosting is soft.’ I’d glue a strip on, and they would literally come right behind me and pick it off.”

Waiting outside a picket fence — twice as high as last year — that guards part of the masterpiece, 5-year-old Joelia Wilcox called the gingerbread house “astounding,” a word she just learned and one she thought appropriate for the situation.

“Our house is too small to fit this,” she said. “I wish we had a bigger house to take this home.”

Her mind then turned to a more metaphysical conundrum.

“Did Santa make this, and did he eat lots or just a crumb?” she asked, quickly deciding that, yes, he did and that she could easily outdo the bearded man in candy consumption. “I want to eat all the icing. I eat so much icing.” 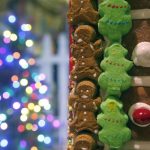 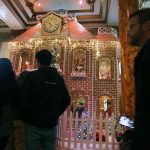 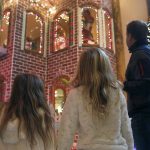 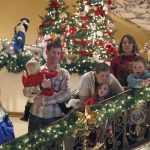 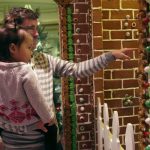