In the technological and artisanal utopia that is San Francisco, every food form seems to have reached its highest self. There are Vietnamese stir-frys made entirely from local ingredients (right down to the secret finishing touch of local butter), vodka sodas born out of bar waste, and—should the craving for a bagel arise—you’ll probably find a small-batch creation, made on the premises.

As far as single item food experiences go, don’t miss the Dungeness crab Louie at Swan’s Oyster Depot, La Taqueria’s Mission-style burrito, b. patisserie’s pastry revelation: the kouign amann, andUna Pizza Napoletana’s pizzas, which many say are the best this side of the Atlantic.

WHERE TO START ON EATER SF’S TOP MAPS

As you know, Eater puts out oodles of maps detailing the top places and things to eat and drink in the Bay Area. Below, we cherry pick the top one or two points on our most popular maps to help time-starved eaters prioritize which spots to visit. 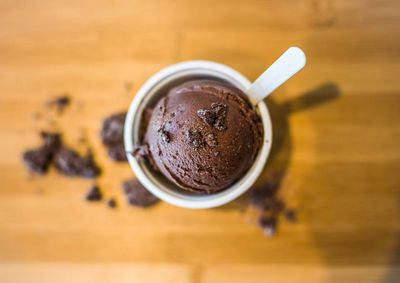 Hot Restaurant: The hottest of the hot is Leo’s Oyster Bar.

Essential Restaurant: And if you need to narrow down the Essential 38, hit up Lazy Bear for new-school fancy San Francisco dining, Liholiho Yacht Club for the latest in casual eating and lunch at Zuni Cafe for the most classic single dining experience in town.

Pizza: Pizzetta 211 is the gem of the pizza map. If you can’t get there when they open to snag a table, Pizzeria Delfina is the San Francisco classic you shouldn’t miss.

Ice Cream: If you must narrow down the ice cream map, hit Smitten for the unparalleled mouthfeel of liquid nitrogen ice cream, or Bi-Rite for OG seasonal treats.

Sushi: The most essential sushi spot on our sushi map:Akiko’s. If you’re looking for a more wallet-friendly and neighborhood-y option, try Saru Sushi Bar.

Beer: If you only go to one Bay Area brewery, know that Cellarmaker is the San Francisco microbrewery aficionados return to again and again. Fat Angel is a great local secret for beer lovers.

Bar: Amazing cocktails and an insider’s vibe can be found at Benjamin Cooper, a decent starting point on the Essential Bars map.

Iconic: You probably also want to check out The 25 Iconic Dishes and Drinks of SF.

These are the key areas of the city every self-proclaimed food person needs to get acquainted with — complete with what to eat and drink in each. 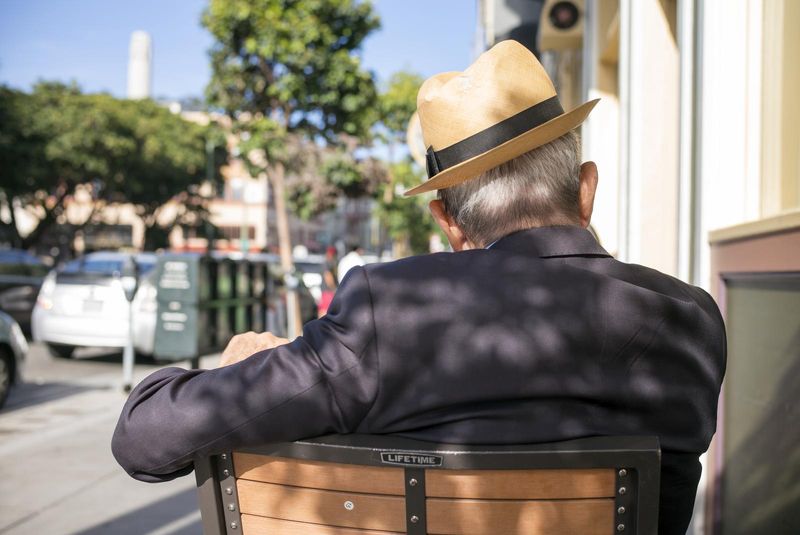 Despite its place as a token “Italian” food neighborhood, you’re not going to find the city’s best pasta in North Beach (hit up SPQR for that). But North Beach has nooks to explore and old-school charm to spare. Stop for a coffee at Caffe Trieste, a cannoli at Stella Pastry, and a beer at The Saloon (1232 Grant Ave.; hint: it’s not really about the beer). If you come hungry for Italian-American fare, get the cioppino at Sotto Mare, or the pizza from Tony’s Pizza Napoletana. If you just want a satisfying meal, Original Joe’s and Tosca — a classic San Francisco spot where NY star chef April Bloomfield‘s name is on the menu — are both guaranteed good times with a strong local feel. Also: you will not find focaccia better than the freshly baked slabs coming out of Liguria Bakery (1700 Stockton St.; Tuesday through Saturday mornings). Finally, Comstock Saloon is the hood’s cocktail destination, and Spec’s across the street is its divey mainstay.

In the late 1990s, Mission dining was getting onto the map with new places like Delfina and the original Slanted Door. Back then, tatted servers weren’t yet a thing, and some diners were afraid to venture into the neighborhood for fear of being mugged. Now, The Mission is home to our city’s most renowned restaurants: Places like AL’s Place,Californios, Lolo, and Craftsman & Wolves (stop in for this bad boy). Not to mention: taquerias. Walk down 24th Street to get a taste of the neighborhood’s Mexican foundation. Walk down Valencia Street to bask in the hood’s gentrification — complete with $12 chocolate bars, $10 smoothies, and your booze-serving standouts: The Monk’s Kettle (beer), Beretta (cocktails) and ABV. The ideal day starts with a morning bun or some croissant variation at Tartine Bakery, continues on with a taco from one of the spots in our handy sidebar, and ends with a family style situation at Bar Tartine. 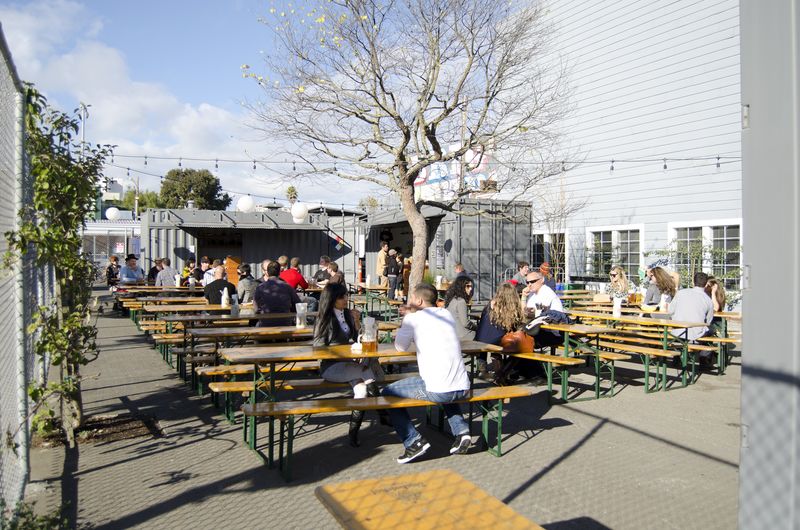 On the forefront of San Francisco’s rising rents, the de facto fashion district of San Francisco has a lot to offer on the bougie food front. Visit the site of the original Blue Bottle coffee kiosk for a New Orleans iced coffee; Souvla for a lamb sandwich and baklava-topped Greek soft serve; and Miettefor California-French pastries that are (almost) too pretty to eat. Or stop by Petit Crenn, the casual spot from chef Dominique Crenn of two Michelin-starred Atelier Crenn, for a light and elegant French lunch. Then try to squeeze into a bar seat at Rich Table around 5 p.m. for chef-driven cocktails and a mouthwatering California take on a NY strip steak.

The Richmond & The Sunset:

“The Avenues,” as locals refer to the Golden Gate Park sandwich made by these two adjacent hoods, are beloved holdouts from “old San Francisco” — before Square, Facebook, and Uber were running everyones’ lives. Here you will find the best enclave of Chinese food in the city, along with pockets of super authentic Russian, Korean, and Japanese foods. Fans of dim sum should troll Clement Street with a portable dumpling from Xiao Long Bao in hand. Or go for the full lazy suzy experience at Hong Kong Lounge or Dong Bei Mama. Also: Ebisu for sushi and izakaya fare, Terra Cotta Warrior or Chili House for mouth-igniting Shandong and Szechuan fare, Outerlands for a surfer-like point of view on farm-to-table seasonal eating (also amazing for brunch), and Trouble Coffee for the original toast that started it all.

It ain’t pretty, but if you’re willing to brave the city’s infamously SRO-addled streets, you’ll be rewarded with some of San Francisco’s best Thai food at the original Lers Ros, fabled banh mi at Saigon Sandwich, and Vietnamese fare — including but not limited to seven courses of beef for a mere $18.95 at Anh Long. There’s also been a recent flood of trendy newcomers breathing some new life into the neighborhood, specifically the darling Huxley and gin steampunk fantasyland Whitechapel.

For all intents and purposes, this is the San Francisco version of a cortado or macchiato, a.k.a. espresso cut with a dollop of milk.

Creator of the aforementioned Gibralter terminology, among the progenitors of the third wave movement. They make delicious coffee, calibrated to the San Francisco palate, which favors more acidic brews with berry and citrus notes.

The first San Francisco brand to apply French bread technique to the region’s native sourdough yeast (c. 1849), Boudin now makes loaves in the shapes of lobsters and crabs for San Francisco beginners to ogle on Fisherman’s Wharf. Mostly in malls, airports, and other touristy places, they make a mean soup bread bowl too. 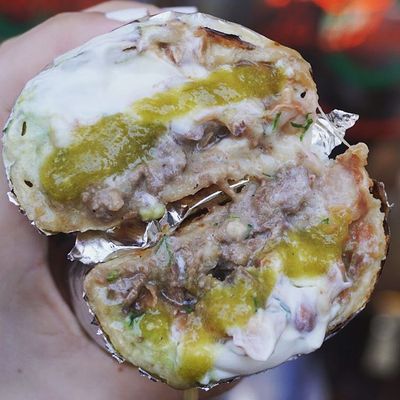 Food Network personality, swoon-worthy phrase maker, Florence is the chef-owner of Wayfare Tavern in San Francisco and El Paseo in Mill Valley. (NB: If you go to Wayfare Tavern, get the steak tartare.)

In 2010, Mina famously turned the hallowed Aqua into his eponymous Michael Mina Restaurant. He’s now one of the most successful restaurant entrepreneurs in the country with various concepts, including Bourbon Steak and RN74, across the U.S. See also: Mina Test Kitchen, PABU.

Another Food Network personality-cum-restaurateur, Chiarello ran the storied restaurant Tra Vigne in Wine Country until 2000. He went on to open Bottega in Yountville, CA, his lifestyle brand NapaStyle, and laterCoqueta, a Spanish restaurant on the Embarcadero in San Francisco. Chiarello is currently involved in a fairly nastylawsuit.

RESERVATIONS TO MAKE IN ADVANCE: 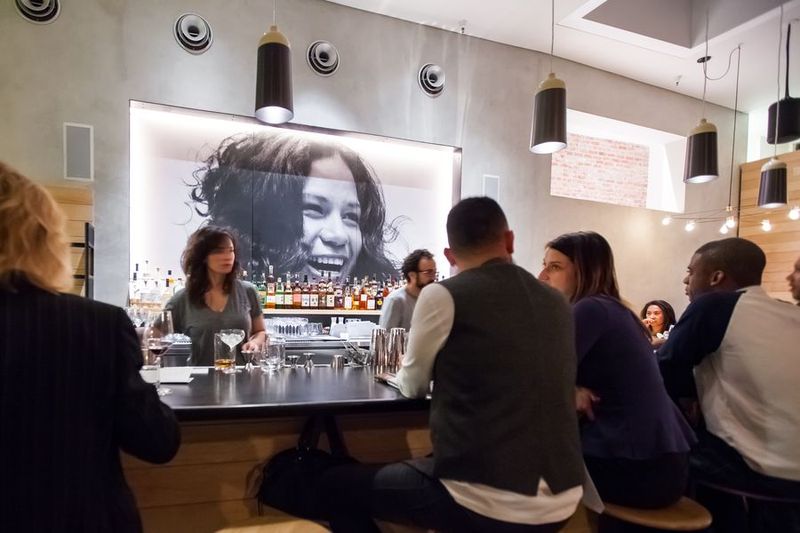 Eater San Francisco is updated multiple times every weekday with breaking news stories (restaurant openings, closings, etc.), features, and more. Here are a few ways to stay in the loop: