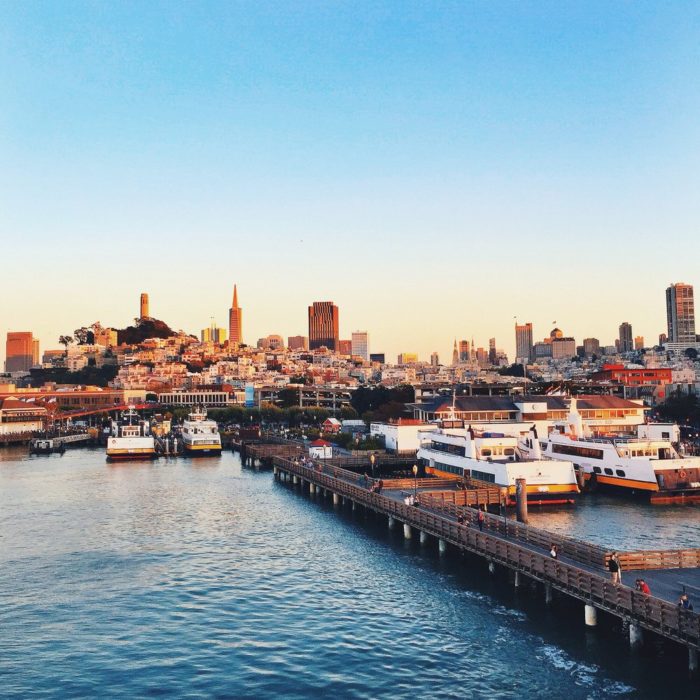 You’ve got to really stand out to survive in San Francisco’s competitive culinary scene. And while a select few spots boast world-renowned dishes and Michelin-starred chefs, there’s only one that can claim to provide “fantasy fine dining aboard the world’s only floating island.” Curious? Read on…

This is Forbes Island… 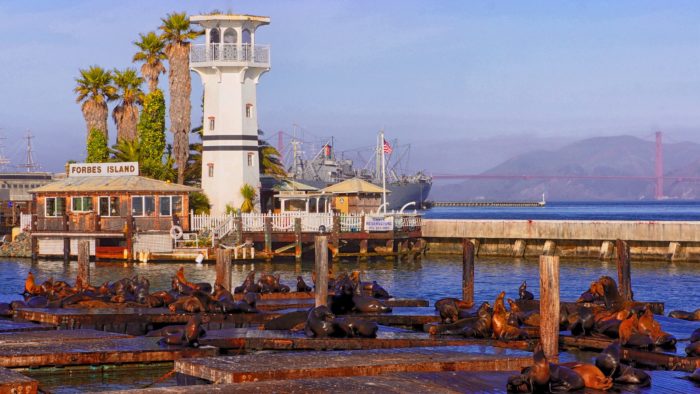 Back in 1975, self-made millionaire Forbes Thor Kiddoo embarked on a plan that only self-made millionaires can truly pull off. He began construction of his very own island in Sausalito. He was eventually able to move it to San Francisco’s tourist capital, near Piers 39 and 41. This is him playing captain. 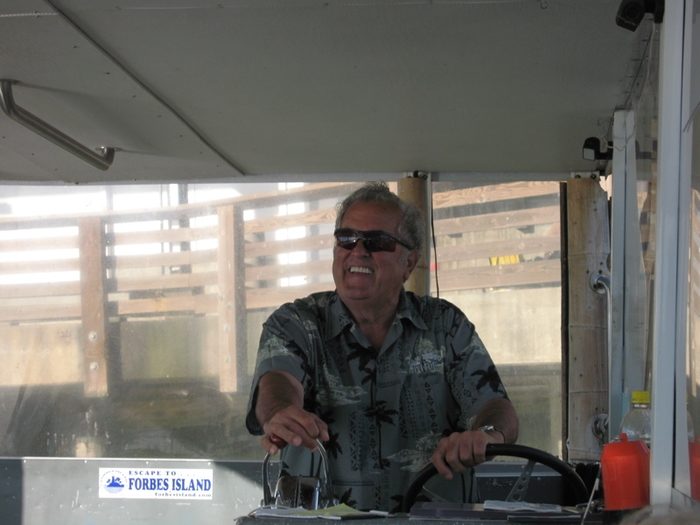 The 700-ton Forbes Island launched on December 23, 1980. It was soon featured on “Lifestyles of the Rich and Famous.” Its The 40-foot lighthouse is the only privately built lighthouse in the U.S. 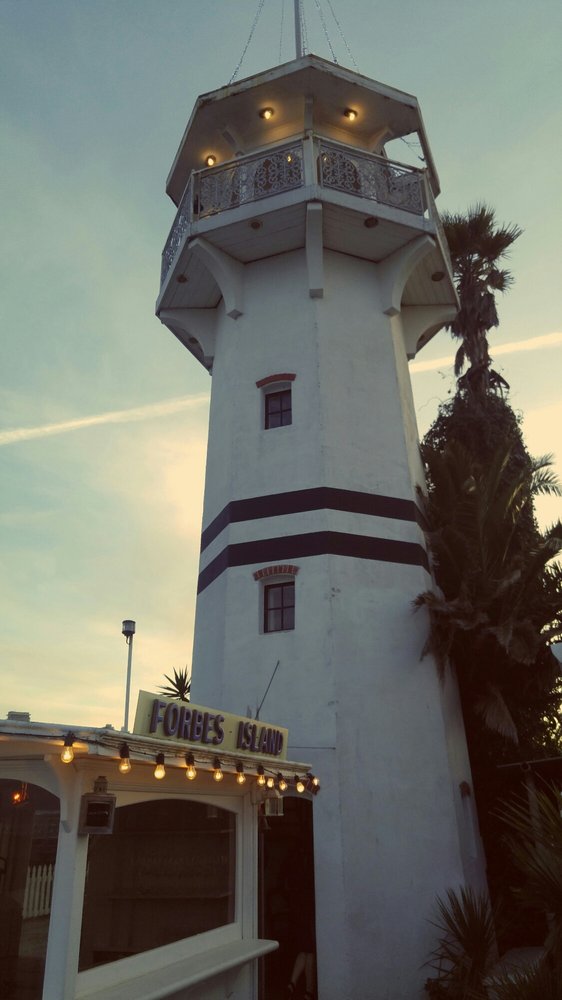 Forbes Thor Kiddoo will personally pick you up and sweep you away from the tourist-packed Pier 39 on this small ferry. 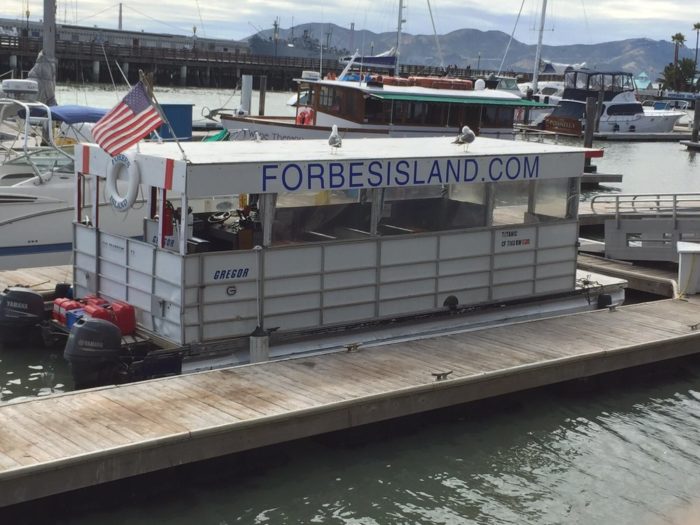 Wave as you float past those adorable (but, let’s face it, kinda stinky) barking sea lions. 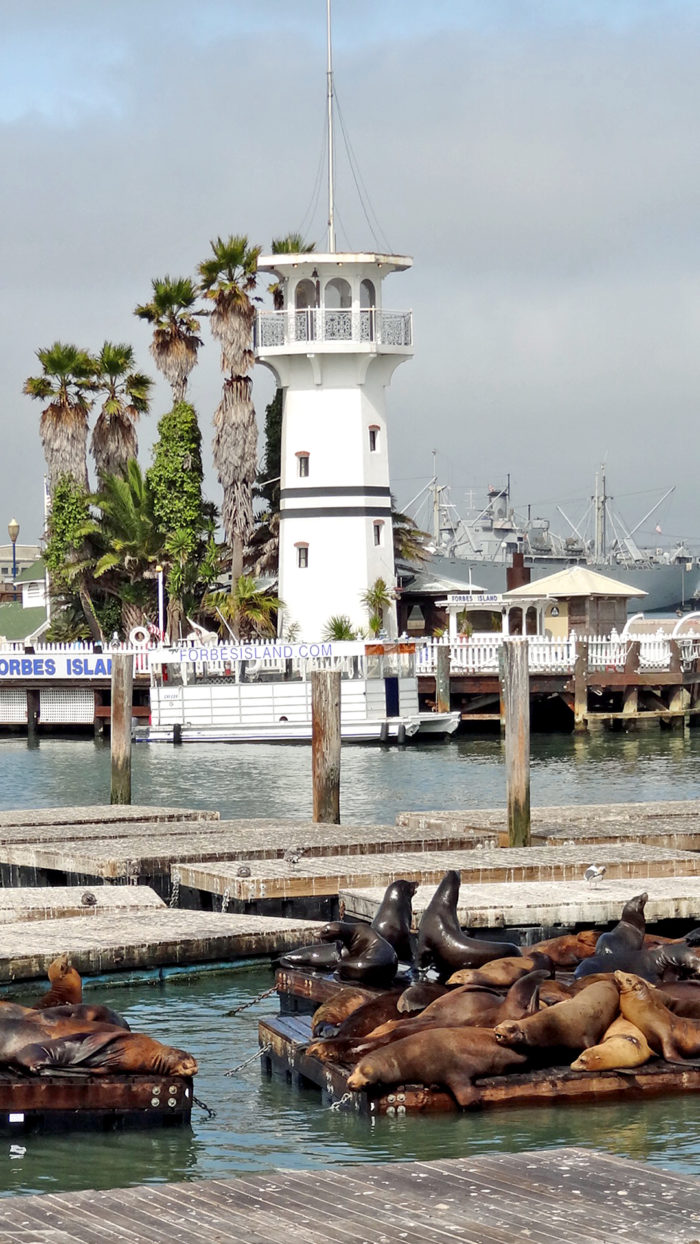 Don’t miss the waterfall once you make it to the island. 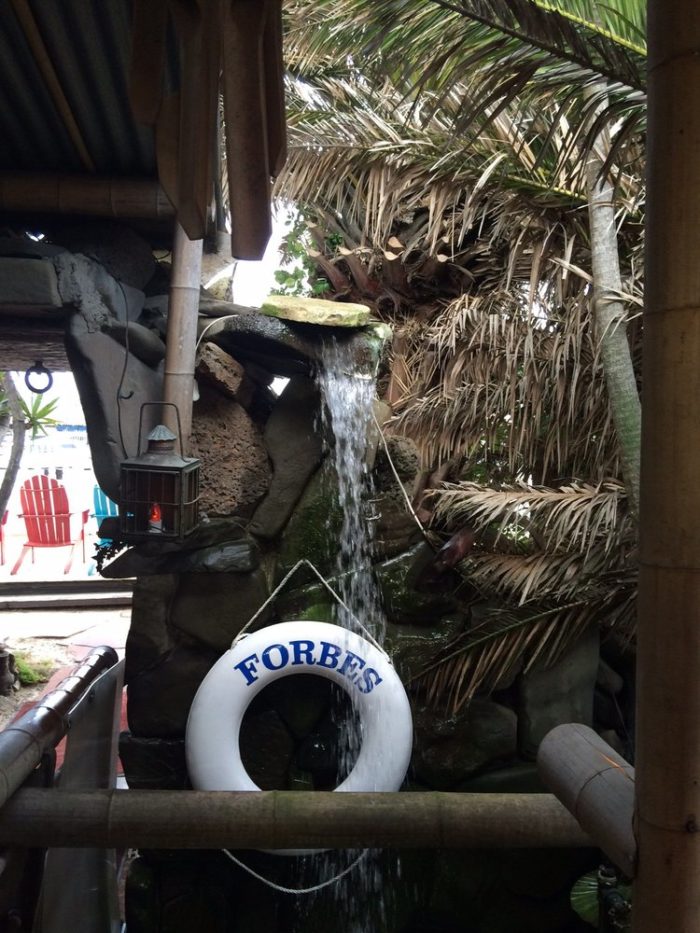 Inside, the restaurant is decorated like an old sailing ship. You can even dine underwater if you choose. 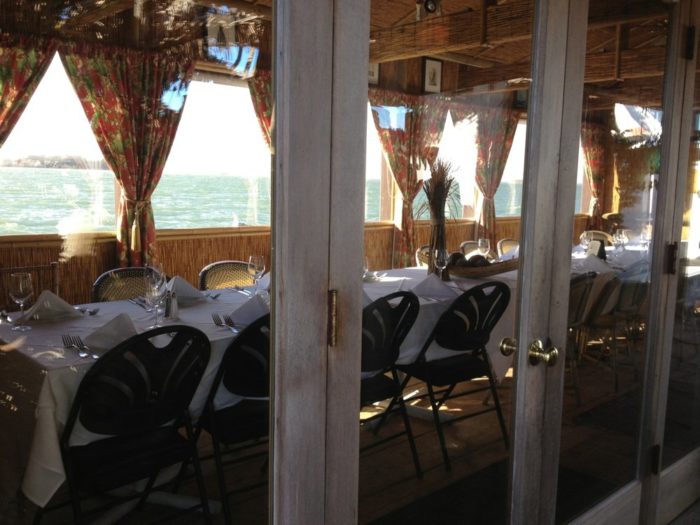 Or just grab a drink at the bar with this guy 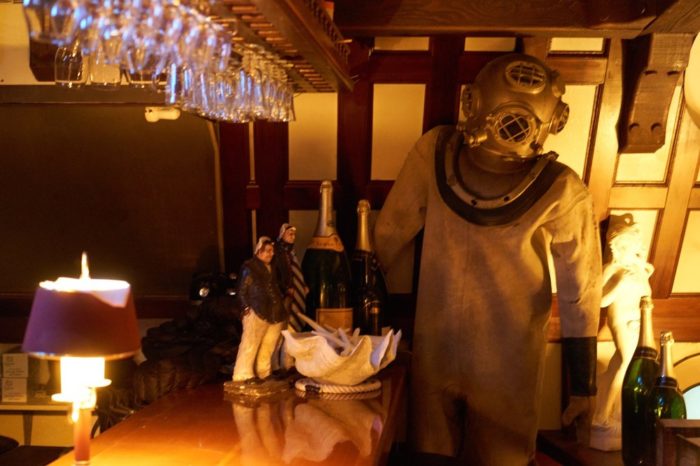 Or chill out on the bayside patio. 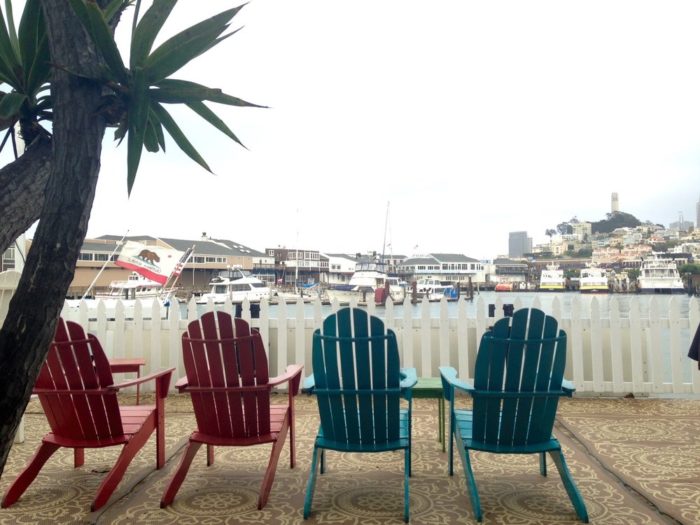 But what about the food? Forbes Island specializes in California-French cuisine. You’ll start off with an Amuse Bouche. 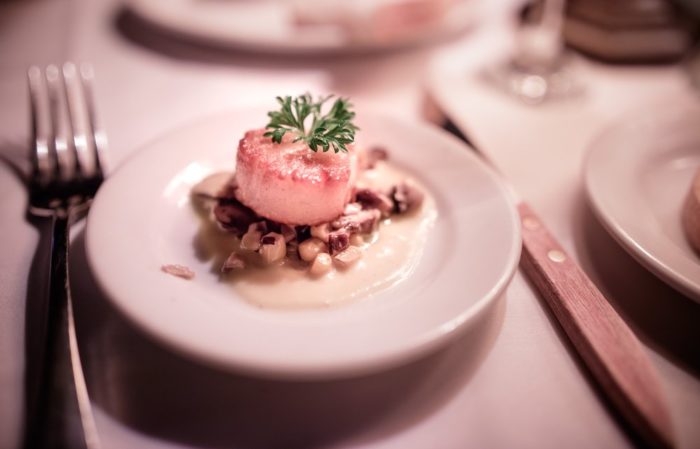 Your second course may be a fresh salad or seafood chowder. 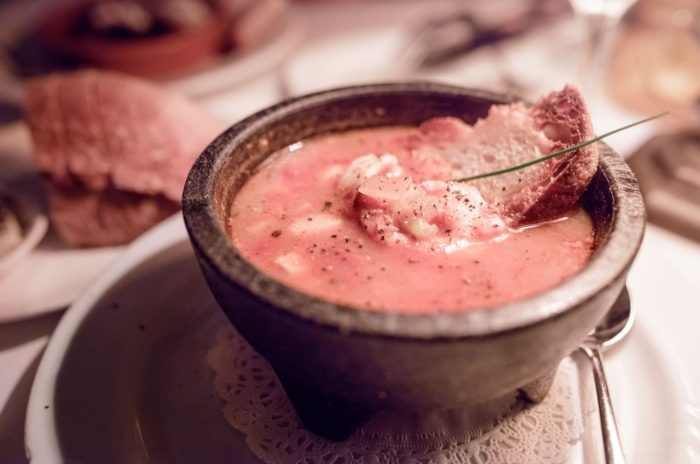 The rack of lamb is a popular third course selection. 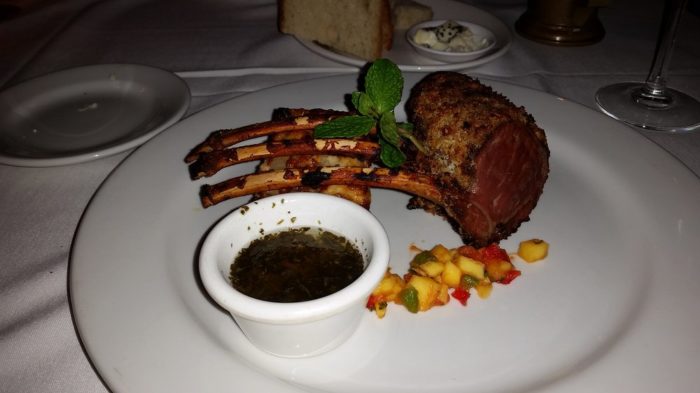 Save room for dessert, like this Berry Napoleon, which combines mixed berries with raspberry sauce, hazelnut tuiles, and mascarpone creme. 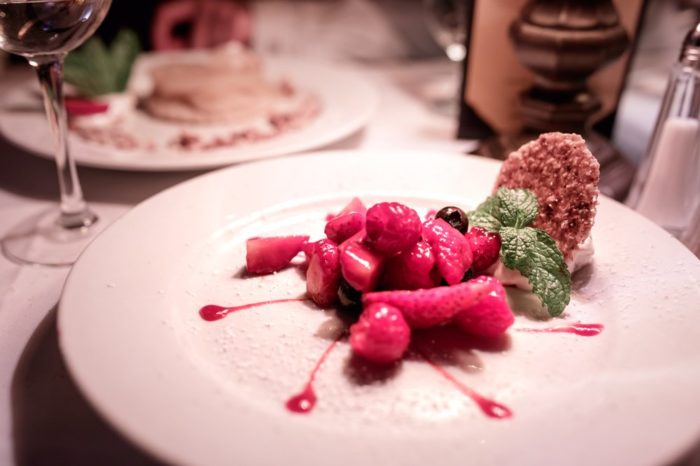 Burn at least a few of those calories walking up this spiral staircase to the top of the lighthouse. 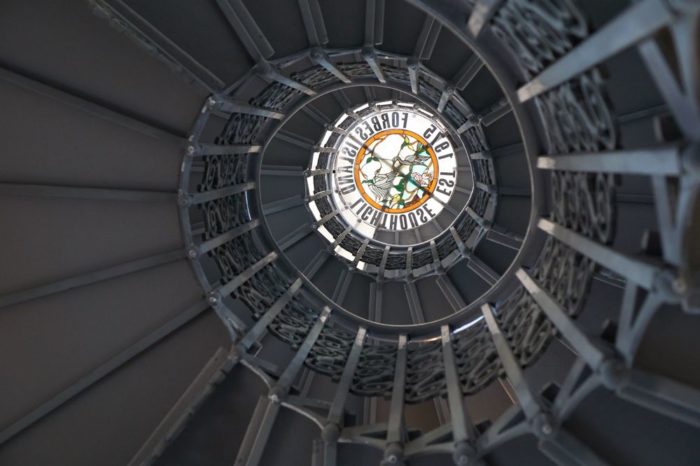 And enjoy a one-of-a-kind view of downtown San Francisco.

Do beware that you are indeed floating on this man-made island, so you will feel some swaying as you eat and drink: “I call it new wave dining,” says Forbes. If you love the idea of Forbes Island, be sure to check out our list of more incredible waterfront restaurants in San Francisco.