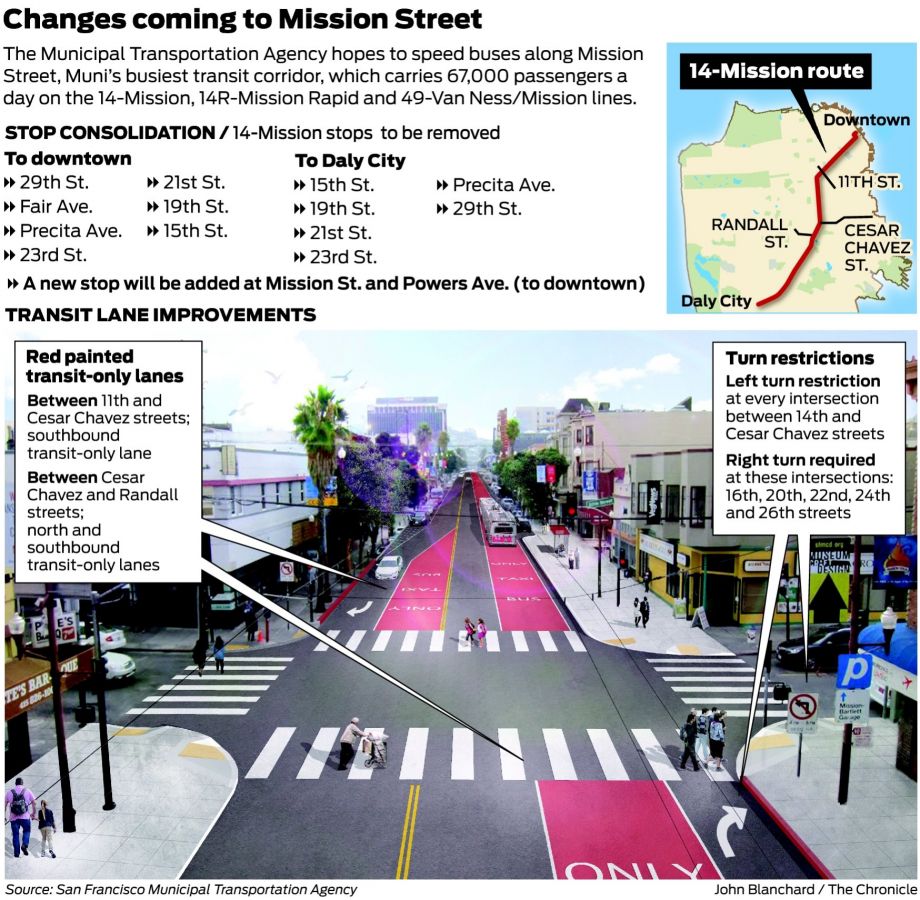 Change is no stranger to the Mission District, and this time it’s the main drag — Mission Street — and the heavily ridden Muni lines that are set for transformation.

The bustling thoroughfare is gaining some red transit-only lanes, while losing a lane of traffic, in a bid to clear out many cars — especially double-parkers — and speed up buses that is reminiscent of transit-first efforts in other parts of the city, including Market Street downtown.

The shifts, which cover a 2½-mile stretch of Mission, begin Saturday, when Muni pares back what it considers an inefficient series of bus stops by eliminating 13 stops serving three bus lines — the 14-Mission, 14R-Mission Rapid and 49-Van Ness/Mission — and adding one.

Public-works crews will also break out paint and brushes and start adding red transit-only lanes between 11th and Randall streets.

The painting should be done by March or April, at which time the Municipal Transportation Agency will start banning left turns at every intersection between 14th and Cesar Chavez streets and requiring right turns off of Mission Street at 16th, 20th, 22nd, 24th and 26th streets.

That stretch of Mission has two lanes in each direction now, but they’re narrow and dangerous, resulting in many Muni sideswiping collisions. Between Cesar Chavez and Randall streets, where Mission is wider, each direction will have a transit-only lane and a shared lane.

And by the end of the year, the MTA will construct wider crossing areas at street corners as well as bus boarding areas up and down the corridor, which is the busiest in the Muni system.

“This is exciting stuff,” said John Haley, the agency’s transit director, who said the changes should reduce bus travel times by another five minutes. Synchronizing traffic signals on Mission and giving buses priority last year had already shaved off five minutes, he said.

“We’re taking a trip that used to take an hour, end to end, and knocking it down considerably,” he said.

The changes on Mission are part of the Muni Forward project, which has a goal of making some of Muni’s most-ridden lines faster and more reliable. Mission Street carries about 67,000 transit riders and 10,000 vehicles a day.

Most of the traffic pushed off of Mission Street is expected to use South Van Ness, Haley said.

Matt Brill, the project manager, said Muni learned during a series of public meetings that many Mission residents ride buses for shorter trips within the area, often to shop and dine. Merchants and residents, he said, were more concerned about keeping parking spaces than traffic lanes.

“They said: We are willing to sacrifice the ability to drive through the Mission (on Mission) but we want to keep parking,” Brill said.

Erick Arguello, a lifelong Mission resident and member of Calle 24, a cultural preservation group, participated in the community meetings that led to the Mission Street changes. He agreed that merchants wanted to preserve parking but that they, along with residents, wanted the 14-Mission to be speedier and more reliable.

“A lot of the merchants on Mission Street depend on the buses for business,” he said. “The goal is to make sure that service is much faster. There have been lots of complaints about buses not coming often enough.”

Haley said the Mission lines, more so than most other Muni routes, have a high number of transit-dependent passengers, often people of color with low incomes, who take trips within the Mission to shop and run errands.

“It’s not a commuter line,” he said. “It’s heavy all day, slightly more in commute hours, but people are getting on and off all the time. This will have a great benefit for people who rely on transit.”