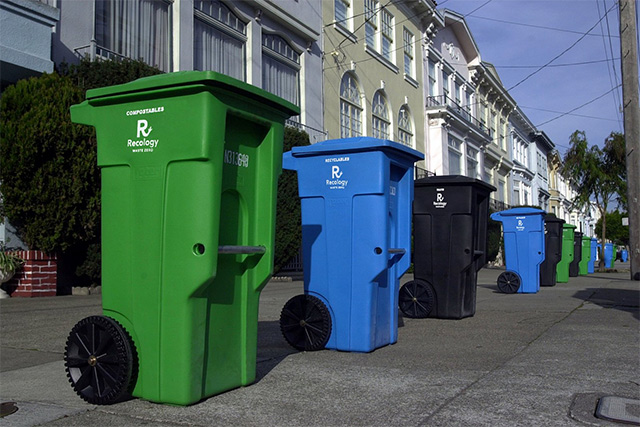 The answer to the question of whether our garbage overlords do any sorting of recyclables from our trash is NO, everything in the black bin goes to landfill automatically, and yes, that’s a huge problem. This being our self-proclaimed San Francisco Appreciation Week, take a quick moment to familiarize yourself with one easy way to help green the city we love.

The question about the black bin came up for me a few weeks back while I was taking out the garbage (and the recycling, and the compost) with my roommate and our downstairs neighbor. I brought up the recent revelation from the team behind San Francisco’s ambitious (and very unlikely) goal of creating just compost and recycling — zero waste — by 2020.

Who cares, our neighbor said: Recology will sort through the black bin for us. Sure, he added, that’s more work for them. But mistakes you might make come out in the wash, so to speak. A bit of recycling here and there that’s in the black bin by accident will make its way back into use, right?

As Peter Gallotta, the Public Relations and Information Coordinator for the San Francisco Department of the Environment explained to SFist, it’s just one pernicious rumor that keeps San Francisco from being the green city we’d all like it to be.

“Everything you put in the black bin is taken to ‘the pit’ (Recology’s transfer station), and then driven to the landfill,” Gallotta explains. “The black landfill bin does not get sorted by someone else. This is actually our responsibility as residents or businesses in San Francisco.”

Though some will float another tall tale regarding the black bin — that scavengers or homeless people will sort through for recyclables, the Chronicle busted that one this week. They quoted Recology spokesperson Robert Reed, who assures them that “the vast majority of bins Recology empties in San Francisco ‘are not poached.”’

While it’s easy to see the wastefulness in a glass bottle that goes to the landfill because it didn’t get sorted, Gallotta adds that most people don’t see the harm in bit of compost — a banana peel or whatever — that ends up at ‘the pit.’ But “when you put food scraps (like banana peels and meat bones) in the landfill, they break down without oxygen (anaerobically) and produce methane, a potent greenhouse gas and major contributor to climate change,” Gallotta and his team explained.

A few more quickies: Coffee cups are compostable, worn out clothes can be recycled here, and plastic food containers only need to be *mostly* clean to go in the blue bin.

Remember to compost, kids **record scratch** it’s the law, and it’s free to request a kitchen compost container from the city.