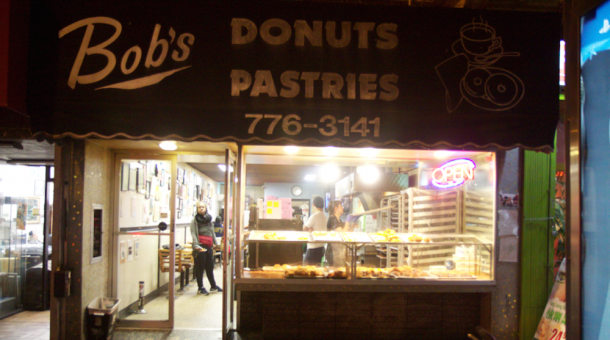 It was close to midnight at Bob’s Donuts on a recent Friday night, and the line that snaked outside onto Polk Street seemed to be only getting longer and more boisterous. In front of me, arranged on big cooling racks, were more doughnuts than I could count—some of the best you can buy in San Francisco, in myriad shapes and sizes, still warm from the fryer. Behind me in line, someone gasped, “This place is a dream come true.”

And so it is. For those of us who love a good doughnut, of course, but also for anyone who longs for a less rarefied time in the city, when food could be delicious without being expensive and hyper-gourmet. A doughnut at Bob’s is an iconic San Francisco food experience at any time of day, but especially late at night, when the shop serves as a neon-lit oasis for folks looking to sober up after all the nearby bars have let out.

What I love about Bob’s is that the place doesn’t put on any airs. The Nob Hill institution goes back nearly 70 years and hasn’t really changed much in all that time. It isn’t your twee artisanal doughnut parlor where you pay $3 or $4 for a dainty cream-filled thing and are expected to feel grateful for the privilege. In fact, quite the opposite. The whole setup at Bob’s is endearingly haphazard. There isn’t anything particularly romantic about watching the glaze machine, which resembles a big paint-roller tray, or the employee filling the fryer with shortening from what looks like a blue trash bag.

The main thing is that the doughnuts are made fresh right in front of you at a remarkably fast clip. And honest to God, heaven is one of the shop’s comically oversize, slightly gooey apple fritters ($2.95), or one of the crumb cake doughnuts ($1.25), which are spongy and delicate and dusted with crunchy-crumbly bits. If you’re feeling ambitious, go for the Big Donut, which is roughly the size of a car’s steering wheel and will run you $10.95— unless you finish it in less than two minutes, in which case it’s free. Chase everything down with a cup of cheap, hot coffee.

Of course, Bob’s is just one of San Francisco’s many 24-hour doughnut parlors, where you can inhale a thousand calories’ worth of fried dough for five or six bucks at even the ungodliest of hours—with apologies to your cardiologist. Each one has its charms: There’s the Allstar Donuts on Clement Street, whose doughnuts can go toe-to-toe with Bob’s if you snag one fresh from the fryer, but whose vibe tends toward the exact opposite: chill enough, even at midnight, that you’d feel comfortable settling in with a paperback. In Chinatown, there’s Danish and Donut Corner (formerly Happy Donuts), where I was recently initiated into a community of die-hard late-night lotto scratchers who seemed genuinely excited when I thought I’d won $500 playing Blackout Bingo—and didn’t laugh at me when it turned out all I’d won was another lotto card.

But as far as ambience goes, there’s no beating Bob’s. Chris Javier, the general manager, explains that in some ways, working the overnight shift at the doughnut counter isn’t so different from being a bartender: You have to talk down your share of rowdy drunks. But at a bar, Javier says, “you’re providing the thing that’s going to mess them up. With doughnuts, I’m providing them with happiness.”

There also aren’t many bars left in San Francisco that cater to the kind of mixed crowd you’ll find at Bob’s, which is the shop’s other defining feature: In how many other places in the city can you find the tech bro, the homeless person, the cop, the club-hopping hipster, the drunk tourist, and the Cantonese-speaking elder all sitting shoulder to shoulder? In the food world, perhaps only our (un-bougified) taquerias hold the same egalitarian appeal.