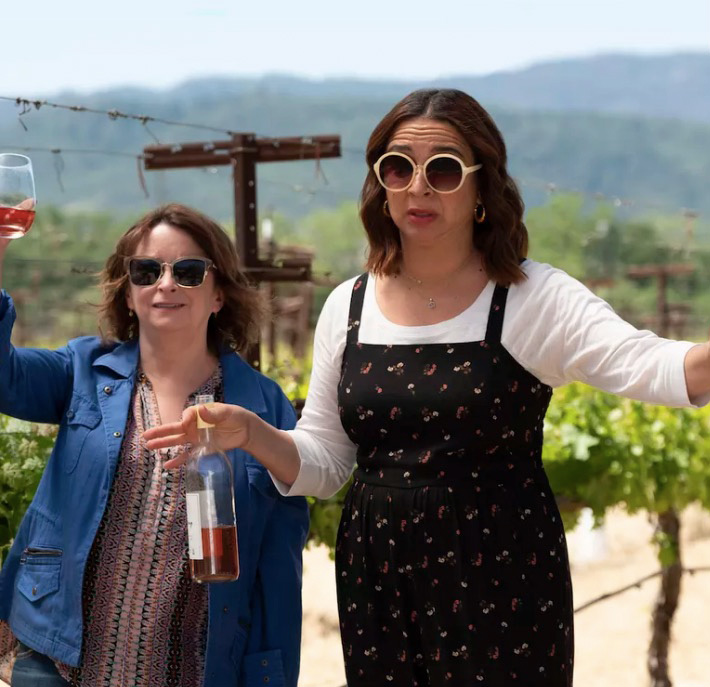 NL alum Rachel Dratch’s 50th birthday party in wine country may have been the impetus for the highly-anticipated Netflix film Wine Country, but there’s perhaps another person who deserves some of the credit for making our all-star female cast dreams come true: Sonoma County chef Gerard Nebesky, proprietor of Gerard’s Paella Y Tapas in Santa Rosa, who was tasked with organizing Dratch’s birthday weekend.

Nebesky met Dratch more than 10 years ago when he was hired to cook paella during another wine country trip. The two became fast friends, meeting up on other occasions in Sonoma, New York, and at Burning Man, where Nebesky cooks for the founders every year. She even brought him and his family out to the Turks & Caicos for her 40th birthday party, which he said largely consisted of an intense Scrabble marathon.

So when Dratch decided to host her 50th birthday in wine country, she naturally turned to her friend with “the local hook-up” to secure their lodging, organize their itinerary, and of course, cook his signature paella. We talked to both Nebesky and Dratch to find out what went down that weekend and what it all means for the film, set to hit Netflix on May 10.

The Film vs. Reality

For Dratch’s actual trip, the women booked the Alexander Valley Lodge, visited Lynmar Estate in Sebastopol (where a wine educator/opera singer serenaded Dratch for her big day), Longboard Vineyards in Healdsburg, dined at Catelli’s in Geyserville, and enjoyed a spa day, based on guidance from Nebesky.

The movie was shot largely at Artesa Winery in Los Carneros, with additional filming at Quintessawinery and in Calistoga. The women stayed downtown at the Andaz Hotel and ate almost every night at Napa Italian staple Oenotri, because it was both delicious and within stumbling distance after a long day of filming, says Dratch. While they didn’t have much free time, they spent some time in Yountville; they enjoyed the signature fried chicken at Thomas Keller’s Ad Hoc, a few of the ladies went to Bottega, and Maya Rudolph snagged an invite to The French Laundry. There was also a spa day at Indian Springs in Calistoga, and a bike tour.

Dratch admits that most moments in the film were either made for movie-only (no dramatic, “come-to-Jesus moments” between longtime friends on the real trip, she says) or greatly expanded upon, but some components are closer to the truth, including an aggressive tarot card reading that didn’t go as expected. “The movie is much crazier than the real birthday was. But there’s a little inspiration that happened in real life that blew up in the movie,” says Dratch.

Another discrepancy: In the film, the women are donning matching t-shirts reading “The Big 5-OH!” in the film; at Dratch’s actual 50th, Nebesky says they read “Tang,” an abbreviation for “Putang.”

Nebesky’s character did make it into the script and Gerard the Paella Guy is played by a significantly-shorter Jason Schwartzman. Dratch has made it clear however, that he’s “nothing like the real Gerard,” who does not cook his paella with an oar (see above).

‘Cut the crap! Just tell me how much of that [wine] I can fit in a football cup full of ice!’

Nebesky also remembers a particularly funny real life winery moment that could have inspired some onscreen banter. “The wine educator reminded me of Philip Seymour Hoffman in The Big Lebowski; he was kind of nervous and twitchy and trying to make things just right,” he says. “He was trying to do all this wine speak about the wine and its nuances, and one of the women totally cut him off. She was like, ‘Cut the crap! Just tell me how much of that I can fit in a football cup full of ice!’ And that made him all jumpy.”

The women’s scripted wine country weekend appears to follow the general guidelines of female-forward comedies like Bridesmaids and Girls Trip: Hilarious drunken debauchery with some darker, more serious moments about women, aging, and friendship woven in. But all laughs aside: Could Wine Country actually be bad for wine country?

The movie Sideways single-handedly destroyed the market for merlot 15 years ago, all because of one line in the film. Only recently has the grape’s reputation begun to recover, so it’s not completely ludicrous to suggest that a wine film starring the top female comedians around — which will also be widely available on Netflix — could have a potentially negative effect on the wine industry or wine country tourism.

But Dratch doesn’t see that happening. Wine country is simply the backdrop, she says. If anything, the film will entice more people to come visit. “We don’t really get too specific about wine in this movie. There are a few pretentious wine snobs that are pretty fun, but I don’t think we’re going to turn the wine industry on its ear,” she says. “On the flip side, I think there’s some good travel porn about it. It’s beautifully shot in some really beautiful locations. If you haven’t been to Napa and you have this vision of it being older people being driven along in vans, Napa is pretty enticing in this movie.”

As for Dratch’s real life wine palate? “I’m an enthusiastic novice. I like learning about wine. I’m the person who’s like, ‘Oh! I taste honey!’ I like to go with my own palate, not that it’s particularly expert,” she says.

“I don’t have a wine fridge though; the true mark of success in life.”