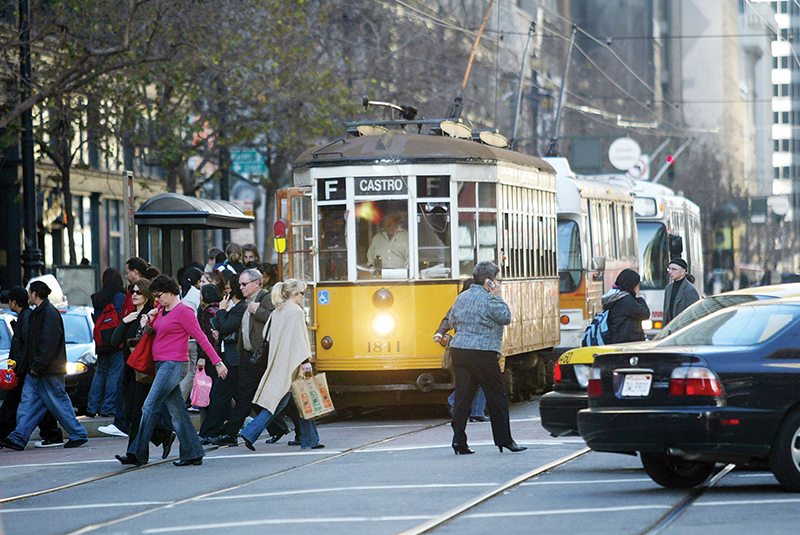 In San Francisco, where there is a registered car for about every two residents, city officials plan to bolster its transit-first policy by requiring new construction to add amenities that make walking, riding Muni or bicycling more appealing.

But the proposal, officially called the Transportation Demand Management Program, hit a roadblock during Monday’s Board of Supervisors Land Use and Transportation Committee hearing as a number of different groups called for amendments to the current plan.

The goal is to reduce car trips from new development sites to reduce congestion and improve the environment and roadway safety.

Carli Paine, San Francisco Municipal Transportation Agency’s transportation manager, said the program is “a change in how new development shapes transportation choices for site users to reduce the need to drive.” She added, “On-site parking is the most powerful determiner of whether someone chooses to drive or not.”

Walk SF, an organization advocating walking, as well as health services nonprofits and the Residential Builders Association, a local construction association of smaller residential projects, were among those critical of the current proposal.

Under the proposed program, which was introduced by Supervisor John Avalos and approved by the Planning Commission, developers must submit plans to reduce vehicle trips by incorporating a host of measures that are based on a scoring system.

Each project would need to achieve certain points based on the number of parking spaces. On the lower point scale, measures include things like showers and lockers. The higher scale includes transit subsidies and reduced parking spaces. An on-site grocery store would also earn points.

The requirement would apply to residential developments of 10 or more housing units or other developments, such as office or retail space, in excess of 10,000 square feet. There is an exemption for 100 percent affordable housing projects.

Transportation demand management plans would cost at least $6,000 and periodic compliance review fees at $1,000 to continue to ensure proactive compliance with the requirements.

Cheryl Brinkman, vice-chair of the SFMTA Board of Directors, said by adopting the program San Francisco “would once again be a model city for the rest of the nation and be a laboratory for new ideas.”

She added, “It is possible to grow smartly. We are on that path. This is a key step.”

There were also concerns about the grandfathering provisions.

The Department of Environment said recently there are 425,000 registered cars in San Francisco. Total vehicle traveling on the streets represents 40 percent of The City’s greenhouse gas emissions.

“We are not going to be able to pass this measure until after I am out of office,” said Avalos, who is termed out of office at the end of the year. He noted, “The concept that’s here before us today is a sound one.”