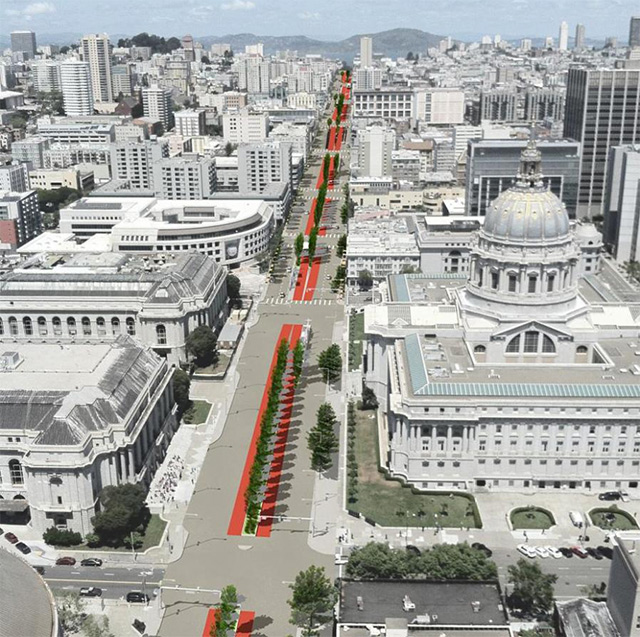 Construction kicks off this month on the long-awaited, much-debated Van Ness BRT (bus rapid transit) project, in which the heavily trafficked boulevard is going to lose the two center lanes of traffic to bus lines. The move is a reversal of what happened in the middle of the last century, when the two center lanes had been used by streetcars, whose tracks were removed to make way for more automobile traffic. And as the SFMTA explains, both Van Ness and nearby Polk Street will be undergoing multi-year construction projects within weeks, which will mean the shutting down of two center lanes on Van Ness and a lot of sluggish trips up both streets if you make the mistake of letting your Uber/Lyft driver take them.

The traffic lane closures along Van Ness, which will allow for construction equipment and the removal of the median as well as 193 trees, will primarily occur between 8 a.m. and 4 p.m. on weekdays, the SFMTA tells us, however there will be night and weekend work at various times too, because: traffic. Also, most left turns off of Van Ness will be disallowed.

The Polk Streetscape Project doesn’t involve the closing of any traffic lanes, but will involve a large amount of daytime upheaval and construction all along the street — in addition to the removal of 106 parking spaces along the corridor and 28 on side streets, essentially meaning you will never park near here again. It’s good news for pedestrians and cyclists, however, as the improvements include “sidewalk corner bulb-outs, to shorten the crossing distance, ADA-compliant curb ramp upgrades; Muni bus stop optimization, such as bus stop consolidation or relocation, bus bulb-outs for easier boarding, and left and right turn lanes to improve traffic flow; raised cycle tracks, green bike lanes… high visibility crosswalks, [and] better visibility at crosswalks.” They also promise a “well-lit plaza atmosphere, widening of the existing sidewalk, decorative asphalt, raised crosswalks, traffic calming measures, and [the] planting of palm trees.”

Meanwhile, it seems like the fight is likely over for preservationists making a last-ditch effort to save the crumbling, history trolley poles/lampposts along the corridor, which were installed in 1915 and were once known as the “Ribbon of Light” (see historic photo here). All but a couple of the poles are set to be removed and replaced with modern steel-tube urban lamps.

The good news is that once these projects are completed, bicycling up Polk and taking buses up Van Ness will be far more pleasant experiences. In, like, 2019.

Concerned neighbors and anyone else are welcome to attend a community open house about both projects on Wednesday evening from 6 to 8 p.m. at the Tenderloin Community School (627 Turk Street between Polk and Van Ness).