San Francisco’s Korean barbecue scene gets a bad rap. “Just go to Los Angeles,” is usually the response when asked where to find the good stuff locally. And while LA does have an infinitely better KBBQ scene, that cop-out answer doesn’t help when you want to eat some tonight.

So, to make sure you get the most out of your Korean barbecue outings in the Bay Area, your trusty Eater editors went out and tasted the local offerings at eleven Korean barbecue restaurants in San Francisco, the East Bay, and Santa Clara to find out where you should go.

There was a lot of top-notch meat, some not so great, a myriad of banchan (the unlimited sides that automatically accompany KBBQ meals), and lots and lots of smoke-filled laundry. Read on for a definitive ranking of the area’s best Korean barbecue, about which you are sure to have opinions — please, do share them with us in the comments.

Some key takeaways from the journey in general:

Finally, while we love the great Korean restaurants around town (shoutout to Namu Gaji, Toyose, My Tofu House, and more), for this guide, we stuck to only restaurants that offer tabletop barbecue. Now, without further ado, here is the Bay Area’s Korean barbecue, ranked from bottom to top.

To Bang’s concept is unique; here, you order by the party size, from a “small family,” or 1.5 portions for $35.99 (which is plenty for two people), all the way to a family of eight for $155.99 (a steal when broken down to $19.50 per portion). Unfortunately, most meats are grilled in the kitchen, taking the fun out of a tabletop Korean barbecue experience. Instead, the grill is employed to make kimchi fried rice, which ends up being overcooked, and lacks egg. There is definitely (To) bang for your buck here, but that’s perhaps the only reason to come.
1052 Kiely Blvd., Santa Clara 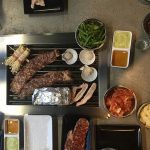 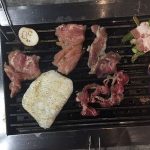 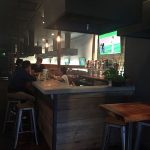 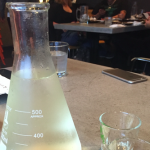 Carbon Grill is like the hipster’s version of Korean barbecue. Herb mayonnaise comes as a side sauce. Soju is served in beakers. The Warriors play on TVs above the bar and certain booths. Every table is filled with young groups of friends, taking advantage of the $24.99 90-minute all-you-can-eat feast that definitely skews more American than other spots on this list — grill options beyond the Korean standards include bacon-wrapped asparagus, lemon herb bass filet, lemongrass chicken wings, and rosemary lamb shoulder. It’s all delicious, and different, and fun, but be forewarned that the air is almost unbearably smoky here, thick enough to plummet Carbon Grill to the bottom of this list.
852 Clement St., San Francisco

With a pretty similar experience to Ohgane, below, the decision about which to visit should probably fall on which is closer to you at the moment. There’s a dizzying array of banchan here — 16 types! — but bigger doesn’t always mean better, and Jong Ga House could improve by focusing down. Not every table here has a grill built-in, which can take away from the experience, but when you’re faced with a $22.99 all-you-can-eat situation that has better-than-average meat quality, it’s easier to forgive.
372 Grand Ave., Oakland

Like an all-you-can-eat Korean barbecue factory, Ohgane is a massive operation filled with families, couples, groups of friends, and solo diners taking advantage of the $26.95 all-you-can-eat KBBQ (one of the best advantages of an all-you-can-eat deal is the affordability it offers solo diners to try much of the menu). The mesquite-fired food is good enough, the service is friendly enough, and the banquet hall-like atmosphere is bustling enough to make it worthy of a visit if you’re nearby and hungry for this kind of meal (bonus: there’s a parking lot). Definitely be sure to visit the $2 grab-and-go ice cream freezer on your way out.
3915 Broadway, Oakland

Brothers is certainly the most well-known Korean barbecue restaurant in the city. On any given night, the very smoky restaurant (it uses charcoal rather than gas) is filled with Korean families getting their fill of what unfortunately is not the highest quality meat, brusque service, and plentiful, though lacking banchan. Perhaps the best thing on offer is the tofu stew, which is a letdown when also faced with charred, marinated meats. It might be time for Brothers to start losing its top spot status.
4128 Geary Blvd., San Francisco

Dancing Bull is San Francisco’s newest KBBQ spot, and it stands out for its focus on bulgogi only and the copper grills it uses, which have two separate areas of cooking, one higher and at the center for the bulgogi and fried rice, and one lower and circling around the center to cook sides such as noodles and vegetables in broth. As the all-you-can-eat meat cooks, the juices drip into the bottom well, flavoring those waiting sides. It’s an updated, unique approach to the cuisine, even if the meats aren’t the best around. The real fun here lies in the broth, which becomes addictive after the meat cooks, and keeps everything juicy. Beware inattentive service.
4217 Geary Blvd., San Francisco

Speaking of Americanized Korean barbecue, Gogi Time definitely delivers in that category — SPAM is one of the grill options here. “Gogi” means “meat” in Korean, which is the appropriate moniker for this $27 all-you-can-eat carnivorous meal. The quality of everything you get is not as high as the a la carte places on this list, but it’s a steal of a deal for the amount of food. You get three to four meats or seafood orders per round (you can choose from galbi, bulgogi, pork cheek, spicy pork, scallops, octopus, and so much more), as well as the standard unlimited banchan, which are only fine here. Pro tip: If you want to just try a meat, ask your server for a taste rather than a full order. And make sure you visit Blind Tiger downstairs for a drink on your way out.
2600 Telegraph Ave., Oakland

There are two kinds of Korean barbecue on this list: a la carte and all-you-can-eat. Of the all-you-can-eat, YakiniQ takes the cake. It’s a no frills-experience in a smoke-filled, raucous room, which really shines during the late night hours (it’s open until 12 a.m. during the week and 1 a.m. on the weekend). There are two options for AYCE: $19.99 per person for the lesser cuts; $24.99 per person for the premium add-ons. Pony up the extra five bucks, because it’s the premium cuts that are best here, including the meaty, substantial beef rib finger and flavorful pork neck (though, word to the wise, YakiniQ charges for any leftover meat). The bulgogi (marinated meat) was stringier than many versions, but it’s that fat that makes it extra tender. Service is attentive (especially when you press the flight attendant-like call bell at the table), with constant grill swaps for a cleaner sear. The banchan is definitely Americanized, with a version of what can be most closely compared to cole slaw. The best time for YakiniQ is late at night, followed by a rousing round of karaoke nearby.
1640 Post St., 2nd Fl., San Francisco

Jang Soo doesn’t mess around — the restaurant, established in 1952, sources ingredients from its garden in San Rafael and makes its own Korean miso, soy sauce, and hot chili pastes. That effort shows: the banchan here was far and away the best, with three kinds of fizzy, bright kimchi, tender fish cakes, soft tofu, and more. Unfortunately the galbi ($32) was not as tender as Han Il Kwan, and the pork belly ($20) was dry. It’s the attention to detail that really shines here, though, with excellent service and a fruit plate to cap off the meal.
6314 Geary Blvd., San Francisco 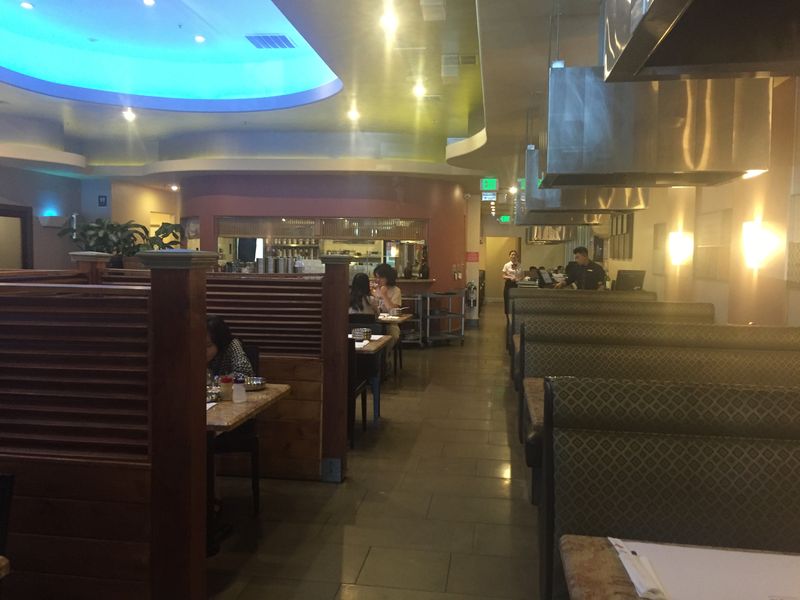 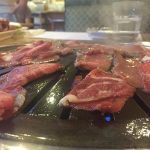 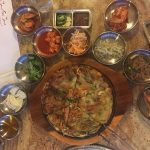 When talking about KBBQ in the Bay Area, the strip mall-located Jang Su Jang is oft-cited as the best — it’s even a Michelin-recommended restaurant. And yes, it’s definitely good. But the meat quality and banchan spread pales slightly in comparison to Han Il Kwan (and the galbi is $9 more), making it number two on this list. Make sure you order the tender tongue here ($28), as well as the meaty seafood pancake. Service can be brusque, but don’t let that deter you from asking for more when you need it.
3561 El Camino Real #10, Santa Clara 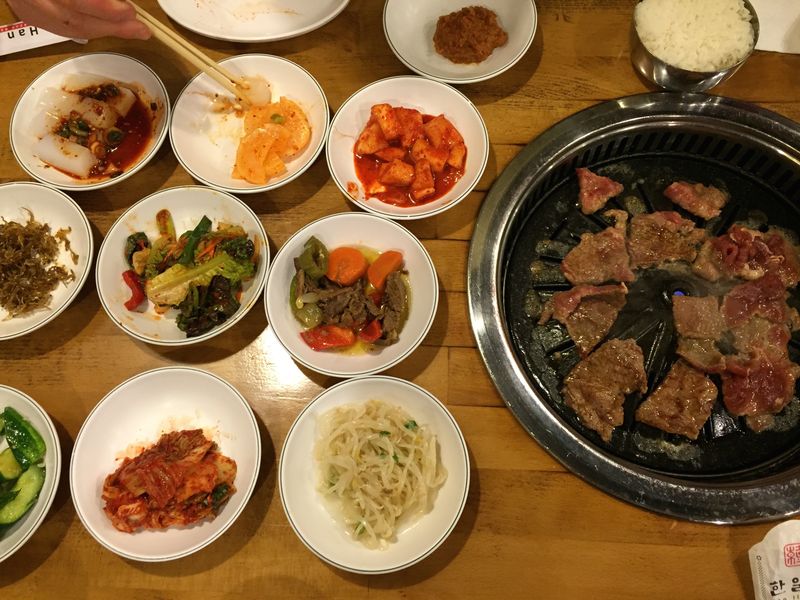 Known for the hordes of Korean tourists that unload by the bus-full, Han Il Kwan rightfully attracts so many visitors due to the quality of its meat, the housemade banchan, friendly service, and attractive environment. The inlaid gas grills have excellent ventilation, so you won’t leave smelling like your meal, and the array of banchan includes seasoned bean sprouts, three kinds of kimchi, baby anchovies, and more. Han Il Kwan’s meat is the most tender, but you’ll pay for it — one plate of galbi (marinated short ribs) is $30. It’s still worth it for the quality and experience, which make it a definite step above the others on this list.
1802 Balboa St., San Francisco