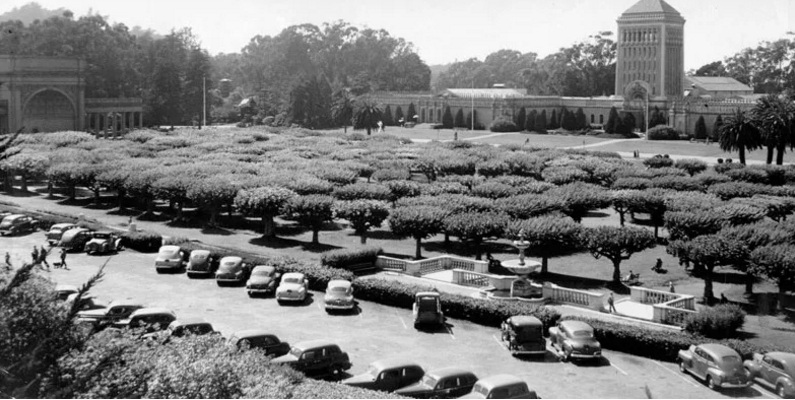 San Franciscans have always loved their parks, harkening back to the 19th century days when we were eager to establish ourselves as a Great City in the European fashion.

That meant beautiful open spaces with classical sensibilities, and so keen were we on that idea that we fashioned enduring monuments to nature and beauty out of some of the most unlikely places.

To show you what we mean, here are several noted parks, then and now.

Golden Gate Park: The Big One, coaxed out of a long and barren strip of desert. The Music Concourse was originally designed as a site for the 1894 Midwinter Exposition (the city’s original World’s Fair) and was crowned by a rather oddball “Electric Tower,” a kind of a miniature Eifel Tower strung with 3,000 electric lights.

Most of the material was carted away in 1896, but the Fine Arts Museum stuck around to become the de Young. The original “pyramid” design was removed in the ’20s, in favor of the building in this 1944 photo. The bandshell (properly called the Spreckels Temple of Music) was added in 1899, a gift to the city, and the last in a line of several bandstands built in the park, each bigger and more opulent than the last before topping out here.

Union Square: Union Square has been a public gathering space since at least 1847, but went the first 14 years of its life without even a name. With the outbreak of the Civil War, the Union Square moniker was conferred as a gesture of support for the North. The plaza once contained a prominent hill, but over the years its material was all carted away to serve as landfill.

Parks and plazas were usually wild and weird places in those days, lacking landscape or organization, and the spot we know today came together in a piecemeal fashion, starting with the central pillar that was added in 1903 as a kind of patriotic trophy for the Spanish American war. The ‘50s-era postcard seen above shows a much more flowery and garden-like atmosphere than the modernist remodel that opened in 2002.

Sutro Baths: A case where leaving well enough alone and just letting nature do the renovations turned out better for everyone. The Baths, of course, were millionaire entrepreneur and San Francisco mayor Adolf Sutro’s weird, giant public pool-aquarium-museum-nautical theater space, the kind of thing that apparently made perfect sense as an enterprise in 1894.

A high-rise was planned for the spot in 1964 (seriously?), but of course a fateful fire demolished both those plans and what was left of the original structure. And then came the weird part: Rather than do anything else with the spot or even cart away the rubble, everybody decided to just leave it be.

The ruins were added to the Golden Gate Recreational Area in 1973, and although it doesn’t seem to be a particularly attractive spot for wildlife, there was a resident otter a few years back. Anyway, it beats beach condos.

Dolores Park: Until 1894, the site of Dolores Park was a Jewish cemetery, and the dividing line between cemeteries and parks was not so distinct in the 19th century. (While touring the park’s most recent renovation, San Francisco mayor Ed Lee asked whether any old skeletons had turned up; he was probably joking, but it’s not a bad question.)

Once the graves were moved to Colma (along with virtually every other plot in the city), the initial park plans were so ambitious they called for a zoo and a miniature lake. Oddly, the city originally opposed the whole thing, calling it a real estate scam, so it wasn’t until 1905 that the actual land purchase happened (for the equivalent of $5 million today). The 1906 earthquake ruined the construction timetable, the half-finished park serving as a refugee camp for quake survivors, and it never did get entirely back on schedule.

The $20.5 million renovation that just finished in January is arguably the first time that the city has ever gotten the park just the way it likes it. Except, perhaps, for that contentious pissoir…but if there wasn’t something weird going on, it just wouldn’t be Dolores.