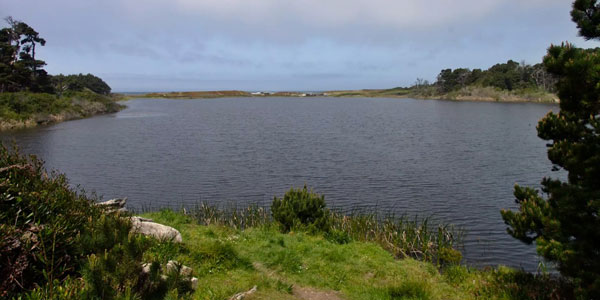 The northern California coast is a place of quiet redwood groves, isolated coastline, and great natural wonder. On the Oregon border, Redwoods National & State Parks are home to massive trees stretching over 300 feet into the sky. At the Lost Coast, the highway is forced inland many miles while rugged sand beaches march on along the shore. Further south, the highway meets back up with the ocean along expansive bluff terraces and extended inlets.

Of all the Pacific Coast Highway sections, this is the place to venture further off the main road; go on a hike, explore one of the many scenic byways, and find a quiet place to sleep.

How To Create A National Park

Redwood, unlike many national parks, has been put together grove by grove over the course of 57 years. Throughout the late 1800s and into the 1900s, the lumber industry had unrestricted access to over 2,000,000 acres of old-growth redwoods. While there was an attempt to begin saving the remaining groves in 1911, nothing began to happen until 1921.

The Save-The-Redwoods League, founded in 1918, began the conservation process with the purchase of the Raynal Bolling Memorial Grove (now in Humboldt Redwoods State Park). The founding of the California State Park system in 1927 created Prairie Creek Redwoods, Del Norte Coast Redwoods, and Jedediah Smith Redwoods (12a).

World War II caused further delays in forming an official national park due to the high demands of lumber. Finally, on October 2nd 1968, the bill for Redwood National Park was signed protecting an additional 100,000 acres of forest. Another 48,000 acres were added in 1978, but most of it had been previously logged.

Throughout coastal California you’ll find small patches of protected old-growth redwoods. These groves are a testament to the hard work and dedication groups of conservationists had over a hundred years ago. Without them, it is likely none of these redwood giants would remain.

13) AVENUE OF THE GIANTS

A Place So Good, You Need Two Roads

Avenue of the Giants is a scenic highway extending from Fortuna to Garberville in Humboldt County. This stretch of road used to be part of Highway 101 until a realignment in 1960 created the existing bypass. Now you can appreciate the 50,000+ acres of redwood groves located along this route without the worry of traffic speeding by! It’s also the home of the Avenue of the Giants Marathon in early May.

Make sure you don’t miss this scenic route — this is roadside tourism at its best.

A Road By Many Names

Highway 1 was put together piece by piece over the course of 40 years. It begins in Leggett, CA to the north and runs all the way down the California coast to Dana Point, CA in the south. Due to so much time elapsing throughout its construction, and also because it is a collection of many smaller roads, it is referred to by many different names.

Initially, there were plans to extend Highway 1 north from Rockport to Ferndale. However, in 1984 those plans were dismissed due to the challenges and costs associated with building through the coastal mountains of the Lost Coast. Instead, Highway 208 from Rockport to Leggett was redesignated as the final piece to Highway 1, which now extends to its terminus along Highway 101 (14a).

It’s hard to find roads to watch whales from these days; no one seems to be working on a bridge to Hawaii, and there haven’t been any encouraging attempts to put I-5 in a gigantic aquarium tube either. Thankfully, though, CA-1 exists.

No big deal, but you can cruise/ride/scooter this coast-hugging motorway the length of our entire state, experiencing Pacific silver, urban excitement, and fish tacos all in the same day. To help you get in on the greatest road in the greatest state, we put together a camping itinerary for a 5-day trip up to the Oregon border from SF.

When you’re in the mood for cheese tasting, oyster shucking, and great white shark watching, Bodega Bay is your one-stop-shop. After a morning on the California Cheese Trail and an afternoon spent playing at one of Sonoma Coast State Park’s excellent beaches, pitch your tent at one of the area’s ranches for some peace and quiet after a day of well-fleeced (and sometimes intimidating-epicurean) crowds. 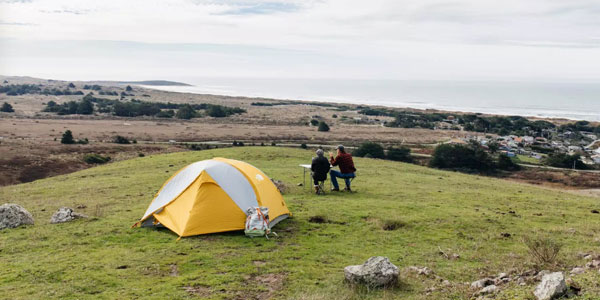 Photo by Lisse Lundin, on Hipcamp

A 378-acre horse ranch with approximately one-zillion campsites, Chanslor Ranch has a diversity of places to set up camp that range from exposed ocean views to wooded streamside retreats. Their group sites make it easy to bring all your friends as well!

The drive from Bodega takes 2 hours in theory, but expect delays caused by your jaw dropping (the only known way to cure a case of CA-1-jaw-droppage is stopping and taking pictures). Definitely plan on geeking out at the Lighthouse before you set up camp, and save a bit of time for exploring your home-for-the-night, because Mendocino landowners have a knack for architectural surprises! 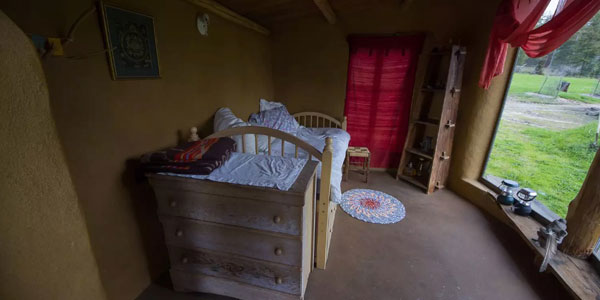 Photo by Kyle Bradford, on Hipcamp

A cob sleeping cabin and an outdoor shower make this redwood hideaway spectacular in a “maybe I was meant to be a mythical forest gnome” kind of way. Complete with beautiful kitchen garden and brick oven, it’s hard to compete with Roseman Creek’s #homesteadgoals.

As you continue up the coast, chances are that you’ll probably want to stay in Fort Bragg longer than you planned for. If you like trains or gardens, definitely book two nights, but if you’re just in town for a day, MacKerricher State Park, with it’s unreal beaches and phenomenal coastal hiking is where you’ll wanna be.

Through you’ll have to make reservations outside of Hipcamp, camping at MacKerricher is worth the hassle. 9 miles of beaches, loads of trails, and a beach with a famously confounding accumulation of sea glass make Mac-K one of the gems of California’s park system!

The only section of California’s north coast without a highway, Sinkyone Wilderness State Park is as rugged as it is unique. Between Fort Bragg and Eureka, the humans:wildlife ratio drops dramatically, and it is well worth your time to zone out in the natural white noise of the Lost Coast. 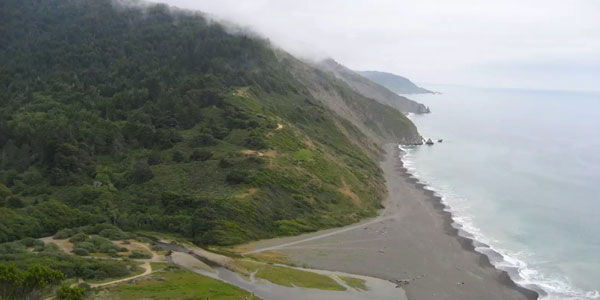 The only drive-in campsite in the Sinkyone Wilderness, Usal Beach Camp is both accessible and out-there. It is also the southern terminus for the lost coast trail, so if you’d like to amend your itinerary to include a backpacking trip, this is where you’d park anyway. Reservations (and permits for backpacking) are through the CA state parks.

Redwoods, beaches, swimming holes, cultural affinities… the Eureka/Arcata metro area has it’s own tourism dispensary for advice on what to see and do. We recommend hiking as many trails in Redwood State and National Parks as you possibly can, and staying in Otter Space. 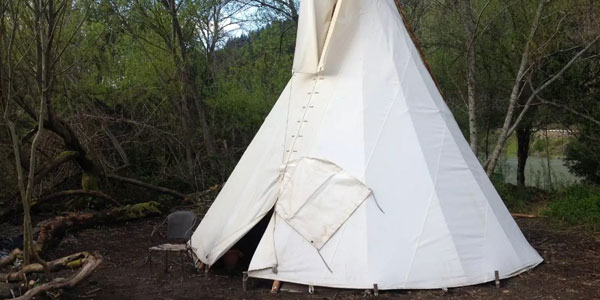 Photo by Peter Alsop, on Hipcamp

Typo dolphinitely intended, Otter Space is an off-the-grid retreat and healing center, complete with redwoods, meadows, and waterfont on the mighty Klamath River. Set up in the meadow or rent a tee-pee, yurt, or cabin for a blissful night on your CA-1 roadtrip!

Hipcamp is the best way to discover and book your next camping trip. Search over 280,000 campsites across the US. From public parks to private land, we’re the most comprehensive guide to camping across the country.

A Little Bit About Tomales Bay

Here’s how it happened.

If you were to draw a line down the middle of Tomales Bay, you’d find the exact location of the San Andreas Fault as it extends north from San Francisco. The west side of the bay is the eastern edge of the Pacific Tectonic Plate, while the eastern side of the bay is the western edge of the North American Tectonic Plate. The San Andreas Fault is a great example of a transform fault. Picture two cars passing each other on a two-way street — that’s exactly what’s happening here, except those cars are moving at the same rate that your fingernails grow. The movement isn’t a continuous affair, instead the tension builds up over many years until the plates slip, causing an earthquake. Point Reyes will continue to move northward, so catch it while you can!

Do you know what else Tomales Bay is great for?

ARE YOU PLANNING A TRIP HERE?

Here’s One Way To Do It