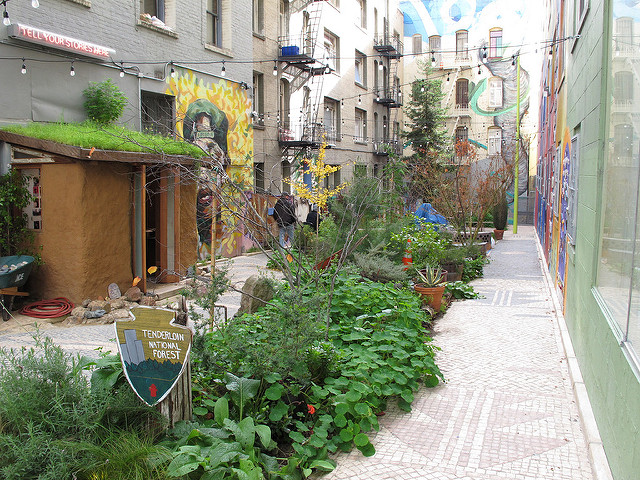 On the map you’ll find historic gardens being preserved on Alcatraz Island, a forest in the Tenderloin, a mini park rich with flowering foliage on an otherwise nondescript Sunnyside residential street, plus more. Oh, and a slew of privately owned public open spaces (POPOS) in the FiDi and SoMa districts.

We didn’t include private gardens for obvious reasons and community gardens didn’t make the cut because we found that the majority are often locked.

The mission of the Gardens of Alcatraz Project is to preserve and maintain the gardens created by those who lived on the island during its military and prison eras. The garden started to come back to life in 2003 when the Park Service manager, California garden preservation advocates, and the Garden Conservancy and Parks Conservancy hired a project manager and horticulturist to work with volunteers all the time to weed.

The work gradually revealed the structure of the old gardens. The four areas that offer the greatest potential for preservation are the main entry road, officers’ row, the warden’s house and the cellhouse slopes. The best time to visit the gardens is from January to September.

Fay Park is actually the backyard of the Fay-Berrigan house on Russian Hill. The Berrigan family commissioned landscape architect Thomas Church to design a garden for the house in 1957, which features twin gazebos that are still there today. In 1998, the city of San Francisco accepted Mary Far Berrigan’s bequest to turn the backyard into a public park. The garden was renovated in 2005.

Rumor has it, Grace Marchant moved onto the corner of Napier Lane and Filbert Street in 1949. At the time, the Filbert Steps was a staircase through a slope that was used as an informal garbage dump. Marchant spent the majority of her life cleaning up the slope (at one point commissioning the city to burn the debris so she could start anew—which it did), and was very casual about property lines. Highlights: You will most likely encounter a flock of wild parrots.

This magical wonderland on Russian Hill was a result of community fundraising and advocacy. In the center is a large grassy area surrounded with large flowering foliage. It also has a children’s playground, basketball hoops, handmade pathways, and benches.

There’s also a community garden but we won’t get into how long the wait list is. Another highlight is a corner area with benches that’s usually shaded. Perfect for taking in the surrounding beauty and enjoying a good book.

This dead-end lane starts on the west side of Leavenworth, just north of the corner of Union and Leavenworth. Walk up a steep set of stairs to find this urban gem. The small lane is lined with homes that all cater to their own gardens. At the end of the lane (roughly half a block) there’s a bench you can sit on and enjoy the surrounding environment.

This park was built in 1972 on a half-acre filled with redwood trees. To make sure all feel welcome, the park’s entrance has a sign that reads “provided for the enjoyment of our employees, tenants and friends.” In the center of the park is a fountain decorated with frog sculptures, a tribute to Mark Twain’s story The Celebrated Jumping Frog of Calaveras County. In addition to the towering redwoods, there are also flowerbeds and ferns. The park’s open during business hours and closed on weekends.

The park is tiny, and is mostly a courtyard with foliage surround its borders. There’s a delightful water feature that’s the focal point of the courtyard. The entrance is draped in white wisteria. Other highlights are gigantic tree ferns planted throughout, and potato vines climbing up the surrounding buildings.

It’s also been called the FiDi’s best outdoor lunch spot—if you know about it. There’s tables, benches with cushions, a nice view of the surrounding area and even a portion of the Bay. Foliage wise there are planters filled with seasonal flowers (including beautiful tulips in the early Spring months).

A quick search of its Yelp reviews reveal that reviewers hesitate to write about this FiDi gem because it’s never crowded and they want to keep it a secret. Bad news—the secret it out.

The Beale Street Plaza is a large and open space surrounded by towering buildings. It’s quite serene, especially on the weekends when no one’s around. It’s loaded with beautiful foliage, and we’ll get to that.

We first have to tell you about the Bechtel Museum, which is centrally located in the plaza (technically it’s in the Bechtel Plaza, but there’s no clear boundaries). It’s a railroad car. In the 1920s, the railroad car WaaTeeKaawas home to Steve and Laura Bechtel and their family at remote construction sites in the West. The vintage railroad car that’s in the plaza today has been restored to replicate the original WaaTeeKaa.

The plaza has an abundance of Japanese maples. The gardens are dotted with a rich mix of annuals. The plaza has comfortable benches backed by large planters filled with everything from flowering plants to ferns.

The Crocker Galleria Roof Terrace has it all: shrubbery, flowering plants in larger planters, a great view, plenty of seating, and a fountain. It overlooks Market Street and the surrounding skyscrapers.

Squashed between 100 First Street and its parking garage is a four-flight staircase leading to a terrace that’s on the roof of the garage. Miss grass because you spend all your time South of Market or Downtown? Then this terrace is for you. In addition to some impressive water features (including a water garden) this terrace has plenty of sculptured grass areas for you to enjoy during your lunch break.

Although it’s a POPUS, the terrace is open 24/7. There’s aluminum tables and chairs sprinkled throughout the entire space. It’s mostly empty on weekends.

Since 1989, artists Daryyl Smith and Laurie Lazer of the Luggage Store have been transforming an alley in the Tenderloin into a garden where local community members gather for all sorts of events, including performance art and group gardening projects. Lazer and Smith have organized murals to be painted on all sides of the alley. The forest has trees, vegetables, herbs, and flowers. Other highlights are a small “green” structure with a living roof, and a clay oven.

There’s a terrace on the 9th floor of the Westfield Shopping Centre. It’s very difficult to get to. To get to the terrace you need to enter 835 Market Street, right next door to the Westfield Centre’s main entrance. Walk a bit and you’ll come across a guard. Explain that you’re going up to see the terrace, they’ll know the drill. The guard will escort you to the proper elevator. You’ll be asked to get out of the elevator on the 8th floor by a different guard, and then you have to take another elevator to get to the 9th floor which is where the Sky Terrace is located. If that sounds confusing just ask the guards for help.

It’s only opened during business hours.

The western edge of Golden Gate Park is known for quite a few attractions, but one of its best kept secrets is a tulip garden that’s planted just below the Dutch Windmill. It features thousands of tulips interspersed with Icelandic poppies, which are in full boom in March and April. Why’s the garden named after a former queen of the Netherlands? Because she donated the Dutch Windmill to San Francisco in 1902.

While most folks are in awe of the awesomeness of the 16th Avenue Tiled Steps Project, there are equally as awesome native plant gardens that line each side. Mostly succulents are found.

Take the staircase at the corner of Brewster and Rutledge until you reach the community garden on the left. Swing a right and walk maybe ten feet (past the bulletin board) and bam, you’ve reached one of San Francisco’s most magical and funky gardens.

The 8,750-square-foot spot is one of the 35 city-owned community gardens that’s overseen by San Francisco Parks and Recreation Department. However, it’s run by a group of volunteers who meet regularly to maintain the 20 plots in the terraced gardens. Unlike the majority of community gardens, this one is open to the public.

This park is between two residential properties on a street lined with houses. The park is managed by the San Francisco Parks and Recreation Department and is kept quite clean. At the opening of the park there’s a bench to enjoy the surrounding view, but the real fun is in the actual garden. If you go deep enough into the park (it stretches to the back of the lot) you’ll come to a landing where a small tile project is installed on the stairwell.