This is the seventh year that Off the Grid will bring its food truck party to Fort Mason, but this time things going to feel a little different. Mainly, according to owner and founder Matt Cohen, it’s going to be “more comfortable and functional.”

That means even more planning for the the cool evening breeze off the Bay, reconfiguring the layout of the event, a new logo, and adding more insight into the kitchen experience for attendees interested in the process.

One of the easiest changes to observe, and one that hints at a larger shift, is the logo. “Part of the idea behind refreshing the logo was that it had a food truck in it,” Cohen told Eater. “That’s not reflective of who we are right now.” The company has grown immensely since it launched as a semi-permanent food truck event, incorporating tented vendors who may not have the capital for trucks yet, launching an incubator for food businesses, and expanding offerings to include scalable solutions for corporations like Google via The Whole Cart.

Additionally, Cohen says the event is returning to its roots somewhat, with a focus on Latin and Asian flavors like Aburu-ya and El Porteño. Unlike past years, Fort Mason’s vendors will rotate through more often, giving diners and purveyors more chances for variation. 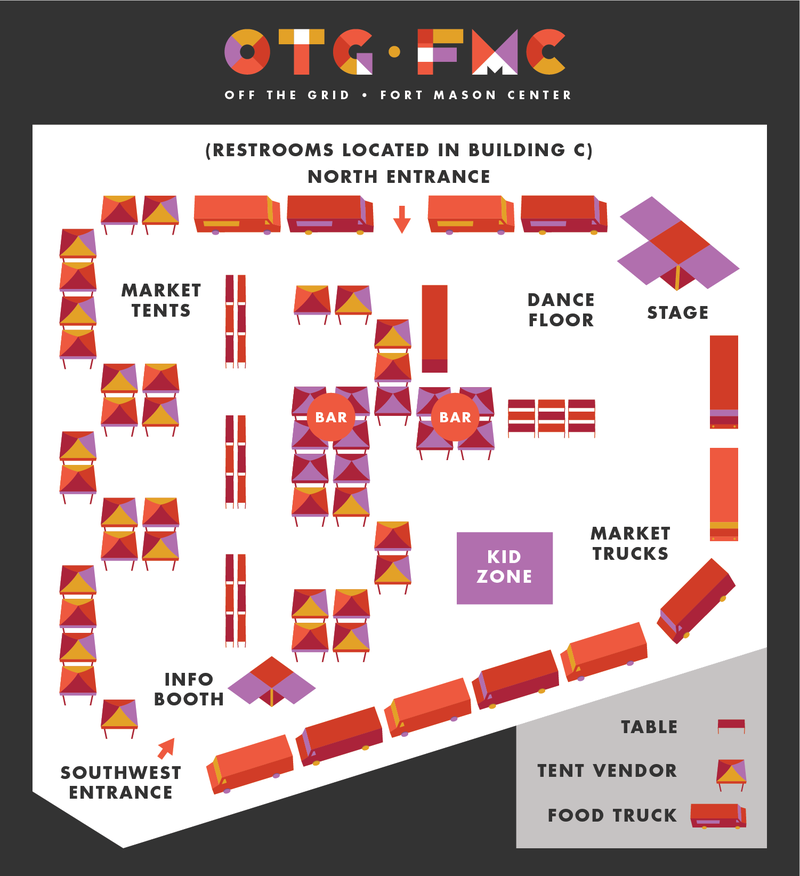 Area One: The Open Air Kitchen

This is the place to wander through tent after tent of vendors, who might not have trucks up and running already. It’s more intimate and a bit further from the entrance, allowing diners to get an eyeful of everything going on over there; high top tables are set up for snacking, with bars flanking it. Check out the list of vendors scheduled for this year’s tents below:

Off the Grid also has an incubator for would-be food truck operators, called Instrucktional. It’s a two year training program that takes a small business operator from recipe testing to truck design to mobile food offerings.

To show off what the entrepreneurs have been working on and get feedback from diners, they’ll have the chance to rotate through a designated booth in the Open Air Kitchen. First up is Postrique, serving sweet and savory churros, followed by Ono Kau Kau, mmmeatballs, and more. Interested in giving your food business the truck treatment? Anyone can apply here.

Area Two: The Trucks and Stage

Slightly separate from the tent vendors is the truck lineup, as well as a stage, dance floor, communal tables, bars, and an area for the kiddos. It’s a little more open, and inviting for those who’ve enjoyed enough drinks and snacks to feel like shaking it on the dance floor. Check out this year’s truck lineup below: