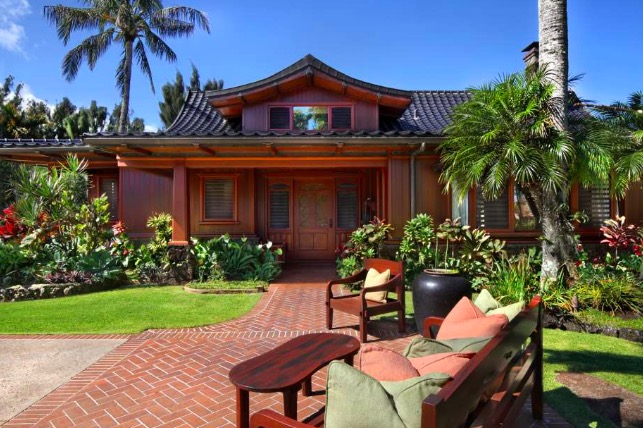 Capturing the splendor of the tropical location, the two-bedroom, 2.5-bathroom home at 2620-C Kauapea Rd. is beautifully crafted with gleaming and rich tropical woods and decorated in a tasteful, vintage style that reflects the Unkrich’s appreciation for 1920s Hawaiiana.

With luring charm and thoughtful details, it’s the sort of place where a Pixar character might live if a film were set in the Hawaiian Islands.

“I’ve had the house for 13 years now, and every time I’m there I find myself appreciating the details of the house, all the joinery and the mix of the teak and koa woods,” says Unkrich whose full-time residence is in the Bay Area. “What I do is very hands-on and I think that’s part of why I appreciate it. Looking at that house for me isn’t that different from looking at a movie and all the work and pieces that go into it.”

At the center of the home is a great room with walls of windows opening onto a lanai. Outside in the the surrounding grounds, a soaking spa, waterfalls and a stream set amid tropical forests and orchards of bananas, avocado, mangoes, noni and papayas. The most extraordinary outdoor feature, though, is a wooden boardwalk jutting across the bluff to a platform where you can take in views across the Pacific Ocean as far as the eye can see.

While Unkrich recalls occasionally taking in all this tropical splendor while squeezing in editing work on films such as “Coco” and “Toy Story 3,” he says the home has mostly been an escape for his wife and three children.

The home is mostly free of technology and when they first bought it in 2006 he didn’t want a TV — but his family convinced him otherwise.

The property’s location on Kauapea Road next to the Kilauea Point National Wildlife Refuge is coveted, as it’s recognized as a sunnier spot on the North Shore than the rainier side of the island and a result draped in lush tropical vegetation.

“It’s one of the most in-demand locations on the North Shore,” Unkrich says. “It’s in a pocket where the weather is better.”

On a bluff, the home is well-protected from severe weather and flooding, yet you can easily walk the path to Secret Beach below, one of the island’s most secluded crescents of sand.

Unkrich and and his wife are reluctantly selling the house as two of their children are away at college. Ulrich left Pixar earlier in the year.

“It’s time for the next phase and new adventures,” he says. “We knew when we bought a vacation home it would limit us from going other places. I don’t regret that at all because it gave us a lot of bonding time as a family. Now that people are starting to disperse, my wife and I are ready to see the rest of the world. We’re looking for the next caretaker of this beautiful place.”