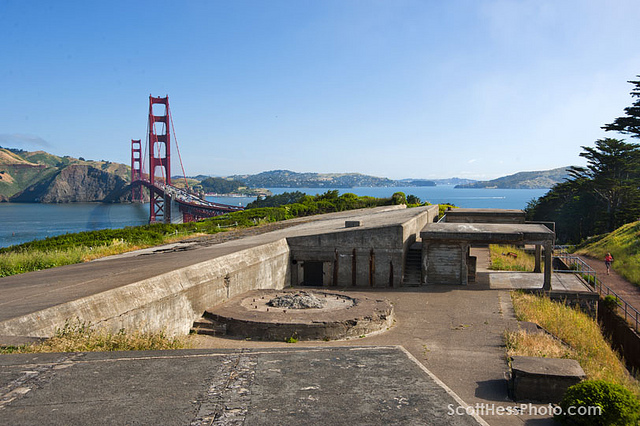 The organization behind 2014’s Ai Weiwei @Large installation at Alcatraz now has its sights set on the long vacant army gun batteries that were part of what was once known as Fort Scott, at the edge of the Presidio. Built to fend off a sea-based invasion that never really came (first for the Spanish American War and then for WWII in 1946)*, the gun batteries remain a spooky relic guarding the Golden Gate, much like the similar concrete bunkers built into the Marin Headlands. And now curator Cheryl Haines and her group FOR-SITE is installing a new group of artworks at the gun batteries next week, for an opening on September 10.

As Curbed reports, 16 artists from 11 different countries (Israel, China, Iran, Syria, Cuba, South Africa, Vietnam, Sweden, South Korea, the UK, and the US) will be installing artworks ” ranging from sculptures to videos to live performance, each exploring themes like security, ideology, [and] conflict.”

The exhibit, called Home Land Security, will remain in place until December 18.

Here’s a further description from FOR-SITE:

Occupying a suite of former military structures in the Presidio overlooking the San Francisco Bay, Home Land Security brings together works by contemporary artists and collectives from around the globe to reflect on the human dimensions and increasing complexity of national security, including the physical and psychological borders we create, protect, and cross in its name.

So, as tourists wander this area of the Presidio with excellent views of the Golden Gate Bridge, and as gay men make there way to Marshall Beach during Indian Summer, there’s going to be a bunch of art to look at.
*This post has been corrected to show the batteries were not constructed for World War II, but they were rearmed in World War II. Fort Scott was established in 1912.