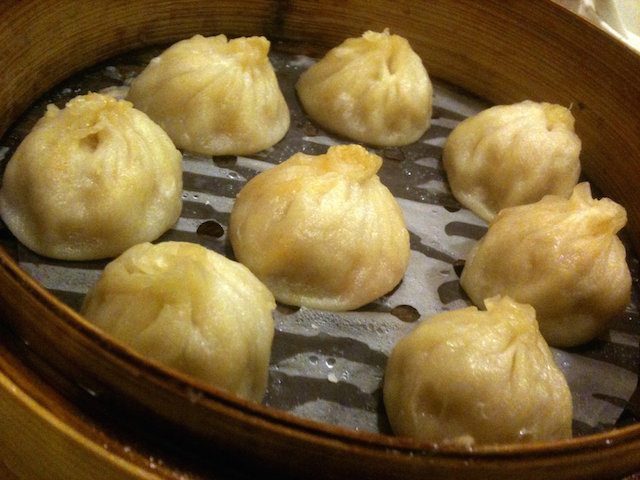 There is some mad competition among dim sum parlors on both coasts for the claim of “best soup dumpling,” because these multifaceted Shanghainese delicacies known as xiao long bao (or XLB) are far from simple to get right, and are not all created equal. Local food scribe Sara Deseran,writing last year in San Francisco Magazine, talked about the difficulty she and her restaurateur husband Joe Hargrave, along with their chef Leo Gan, had in getting the soup dumplings right at the now shuttered Chino. This is because, as seasoned dim sum masters know, there is a perfect balance that has to be struck between the thickness of the dough and the juiciness and flavor of the meatball within, which creates its own “soup” that should burst out, hot but not scalding, when you bite into one. Then there is the traditional ginger-vinegar dipping sauce, which can vary in its tanginess and ginger punch. Aficionados will be no strangers to many of the places on the list below, including longtime popular dim sum emporium Yank Sing — and they can probably tell you where to get all the best ones in New York’s Chinatown too. Just always beware that these are not fork items, and also contain some potentially tongue-destroying hot liquid. Thankfully, Gothamist has this helpful video tutorial on how to eat a soup dumpling like a boss. So, you’re welcome. — Jay Barmann

Bund Shanghai
As the name suggests, Bund Shanghai does Shanghai-focused dishes that include jellyfish and stir-fried eel. The star of the show, however, is the xiao long bao. The restaurant does straight pork, as well as a crab and pork version. As a pro-tip: They sell frozen soup dumplings to go, which means you can enjoy the wonderful morsels in the privacy of your own home. This is also, notably, the only Chinatown spot to make this list. — Jack Morse
640 Jackson Street (between Beckett and Kearny Streets) 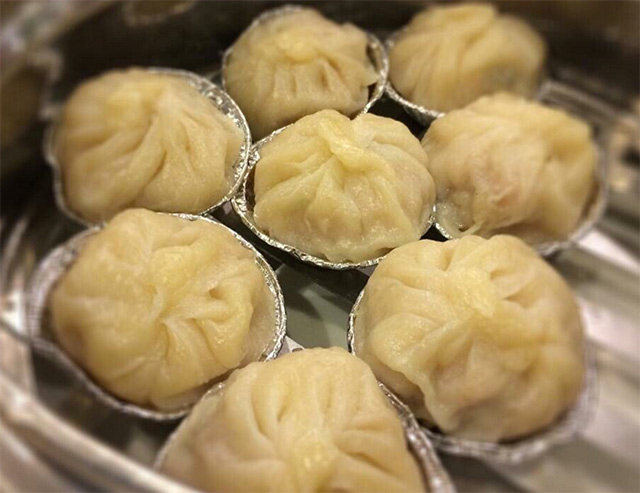 Daimo
Late-night-serving (’til 3 a.m.) East Bay Chinese spot Daimo is well known for their won tons and dumplings, and even got a shout-out from acclaimed critic Jonathan Gold last week. Their xiao long bao, on their menu as “Shanghainese steamed pork dumpling,” come served in individual tins and have less thin (i.e. perfect) skins than their won tons to hold in all that juicy goodness. Also, as the teens say who go here after a night of partying but still aren’t ready to go home, it’s hella cheap. — Jay Barmann
Pacific East Shopping Mall, 3288 Pierce Street, Richmond 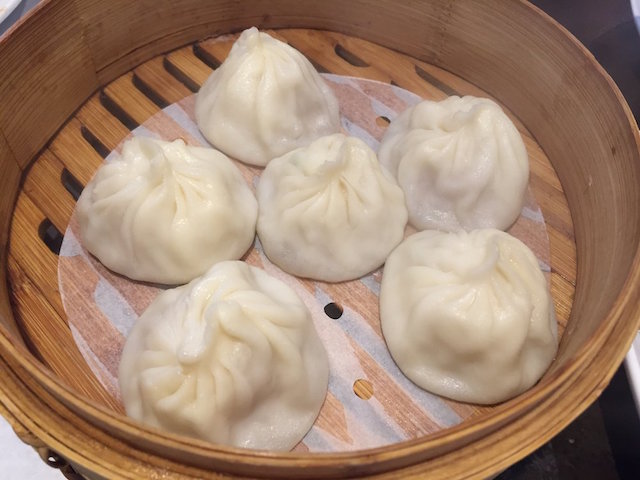 Dim Sum Club
You love Shanghai soup dumplings? Join the so-called “club,” located inside the Russian Hill hotel Da Vinci Villa. Opened in 2014, this restaurant is a casual crowd pleaser, minus the crowds, who must be lined up in the Avenues somewhere seeking out more guidebook-verified dim sum. Also, this place is a wallet pleaser. The pillowy xiao long bao are on the more expensive side of the menu, but everything is priced fairly.—Caleb Pershan
2550 Van Ness Avenue between Filbert and Union Streets 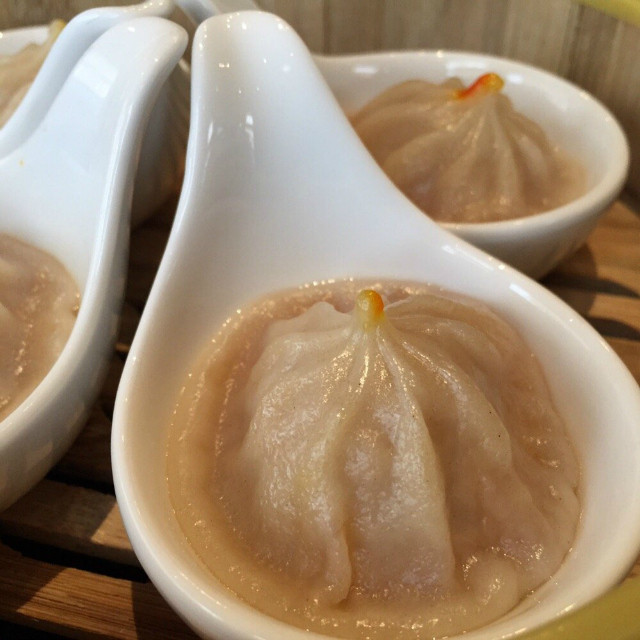 Dragon Beaux
I was irrationally (because it’s certainly not these guys’ fault!) predisposed to hate Dragon Beaux, as it resides in the spot once occupied by my beloved Video Cafe — and a frowny-faced review from Michael Bauer didn’t help matters. But a look at their dim sum menu (only available at lunchtime: 11-2:30 weekdays, 10-3 weekends) whisked away that angst. Dragon Beaux, which is run by Jenny X. Huang and Willy Ng, the folks who own Daly City’s Koi Palace and have a partial interest in M.Y. China, rolls with pork or crab roe soup dumplings, both surprisingly good! The quality of the pork version was much higher than expected (per my pork-eating dining companion), and the crab one, which I expected to be a veritable salt bomb, was instead a delicate marine delight. And the over-the-top decor made me, for just a moment, forget all about Video Cafe’s trusty old booths. — Eve Batey
5700 Geary Boulevard at 21st Avenue 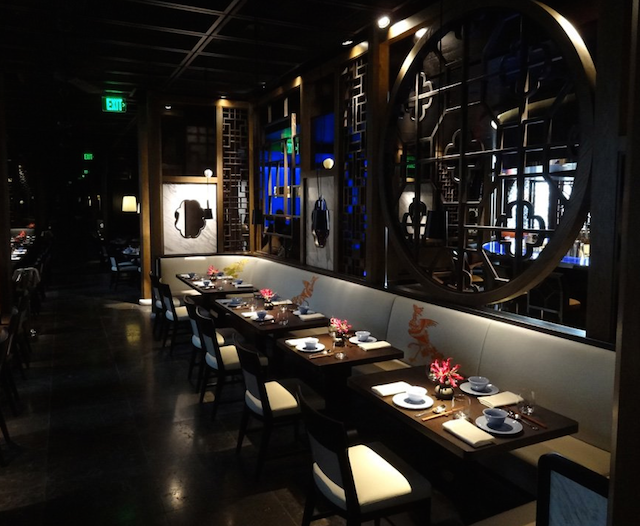 Hakkasan
When you find yourself craving soup dumplings, and you have access to an expense account, Hakkasan is the place for you. Those who can afford to eat at the San Francisco location of the international chain love the spot’s dim sum (they have a vegetarian option!), but the Shanghai siew long bao with crab and pork are the sleeper stars of the show. This spot is definitely on the “special occasion” side of things, but the food makes it totally worth it. So if you’re looking to grab a date (or a good book) and celebrate with some soup dumplings, Hakkasan has you covered. — Jack Morse
One Kearny Street (at Market Street) 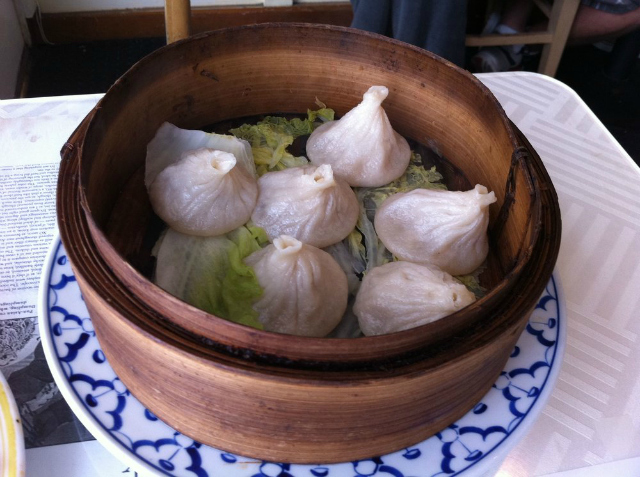 Kingdom of Dumpling
Even if you don’t care about soup dumplings, a visit to Kingdom of Dumpling’s website (if not their Parkside location) is still in order just to see their adorable pictures of in-house dumpling assembly! There’s a pride demonstrated in these photos that comes through when you dine there, and the prices can’t be beat — we’re talking $4.95 for six Shanghai soup dumplings, making this place one of the best deals in San Francisco. But before you order those, allow me to point you to their Shanghai pan fried soup dumplings, which take the delicious and with just a bit of oil and heat raise it to the sublime. — Eve Batey
1713 Taraval Street between 27th and 28th Avenues 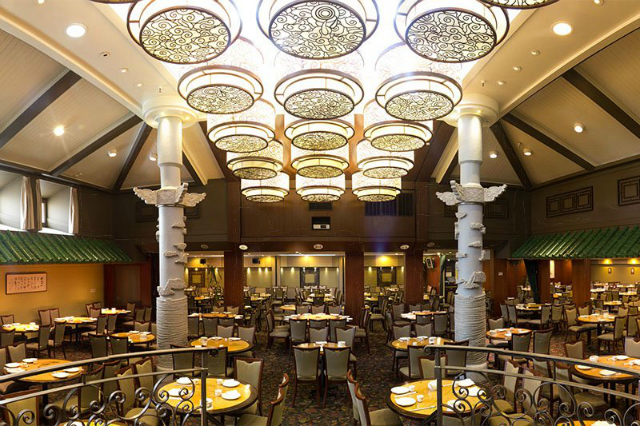 Koi Palace
The first time you take someone to Koi Palace expect them to be nonplussed: “Are we going to Target? Why are we in this strip mall parking lot? Are you taking me somewhere to kill me?” But then you step into the Vegas-y splendor of the restaurant, and all is forgotten. The system of colored jackets on the staff! The (duh) koi! The occasional dragon! Koi Palace is an experience as much as it is a meal, a spectacle as much as it is a feast. And as befits a palace, they have a number of menus, all of which change at the drop of a hat, so call in advance if you’re hankering for a specific dish (650-992-9000) to make sure they’ll be serving it. Their dim sum menu (lunch only) typically sports an acclaimed pork-filled xiao long bao, and there’s an occasional sampler with weirder flavors like kale and beet. But, come on, you didn’t drive all the way to Daly City for kale, did you? Go pig or go home! — Eve Batey
365 Gellert Blvd, Daly City 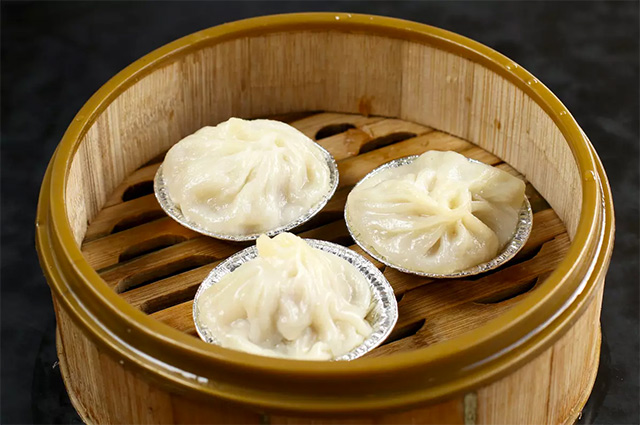 Mama Ji’s
Though mostly focused on Sichuan specialties, this Castro Chinese spot makes some great if imperfectly pleated Shanghai dumplings, as they call them, with excellently flavorful pork fillings. Also, they make a seafood-and-pork version which are equally delicious, and all the dipping sauces here are on-point. Take note that the dim sum menu here is only available during the daytime — and these dumplings can be ordered via Caviar, though the temperature they arrive at is anyone’s guess. — Jay Barmann
4416 18th Street near Eureka 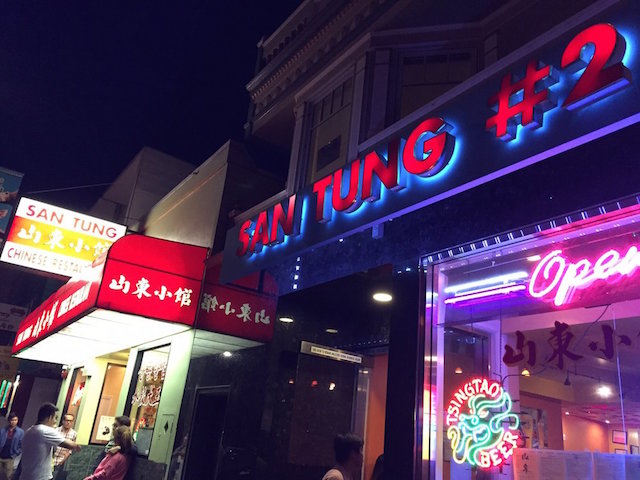 San Tung
This Inner Sunset restaurant is widely known for its dry-friend chicken wings, but you’d be nuts to overlook the soup dumplings. Priced at the lower end, you can order to your heart’s content — which, with San Tung, probably means you’re buying a lot of food. The place itself is low-key, but that doesn’t stop huge lines from forming outside. Luckily for you, there’s San Tung #2 (pictured above), which, fear not, is exactly the same as the place next door. — Jack Morse
1031 Irving Street (between 11th and 12th Avenues) 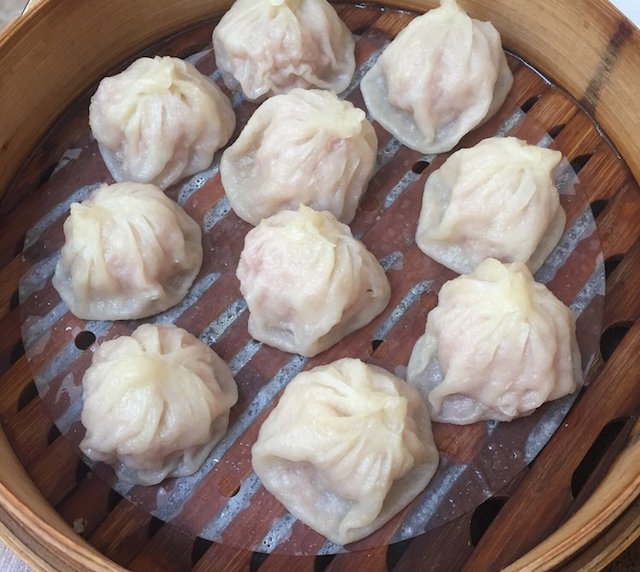 Shanghai Dumpling King
See-through thin but surprisingly strong dumpling skin holds tasty warm soup and sweet pork in Shanghai Dumpling King’s signature xiao long bao. This Outer Richmond go-to spot serves them ten at a time for $6, but every once in a while, you’re bound to find a dud that’s ruptured, leaking its soupy contents. Consider it a dumpling-eating occupational hazard. Another hazard — hot liquid! Give these little guys a second to cool down when you get them. —Caleb Pershan
3319 Balboa Street between 35th and 34th Avenues 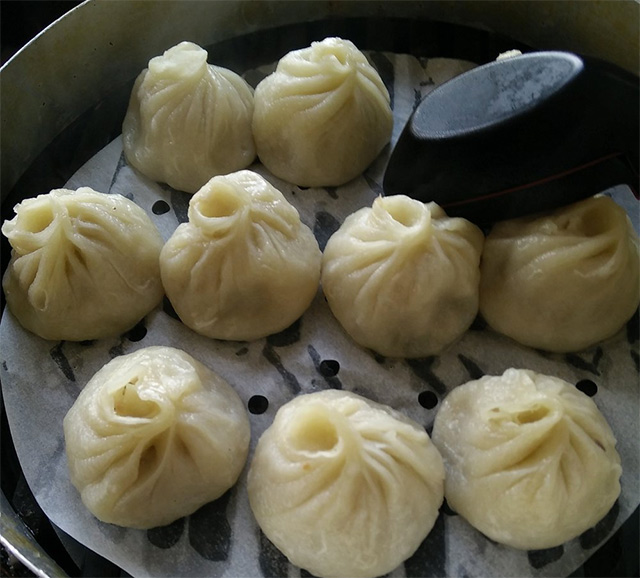 Shanghai Dumpling Shop
Most serious Chinese food fans will tell you that all the best Chinese food these days isn’t in Chinatown, it’s south of the city in places like Burlingame, Millbrae, and Redwood City. And in Millbrae, near the airport, is where you’ll find this Shanghai dumpling specialist. You get 10 for $10, which some dim sum experts will tell you is not a great deal, but these things stand up well in porky flavor and dough properness to examples at the big dim sum palaces closer to the city like Koi Palace and Yank Sing. Also, the dipping sauce has a good vinegar and ginger kick. — Jay Barmann
455 Broadway, Millbrae 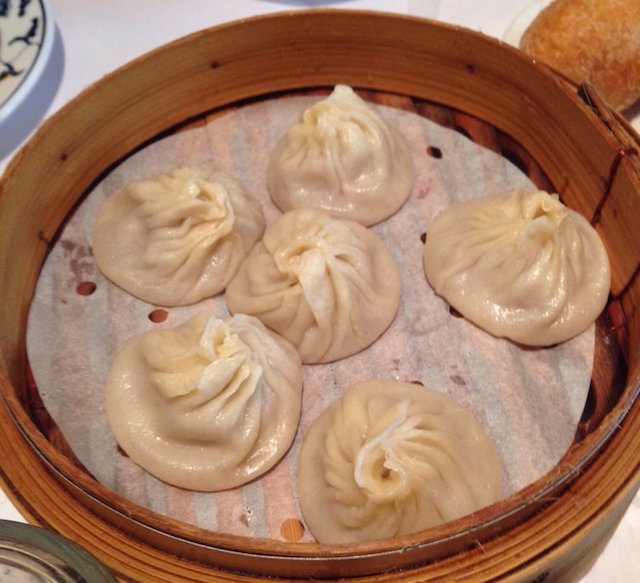 Yank Sing
Yank Sing in the FiDi is a big enough deal to charge pretty much anything at this point. So, yes, they do charge a pretty penny for their more upscale “deem sum” (as goes their transliteration). But the experience — rolling carts, crowds, tablecloths — is as it should be. The XLB are just that, too — only they’re $12 for 6. Still, they’re very good, and you’re paying for the privilege of not driving down the Peninsula or out to the Avenues. —Caleb Pershan
49 Stevenson Street at Ecker Place