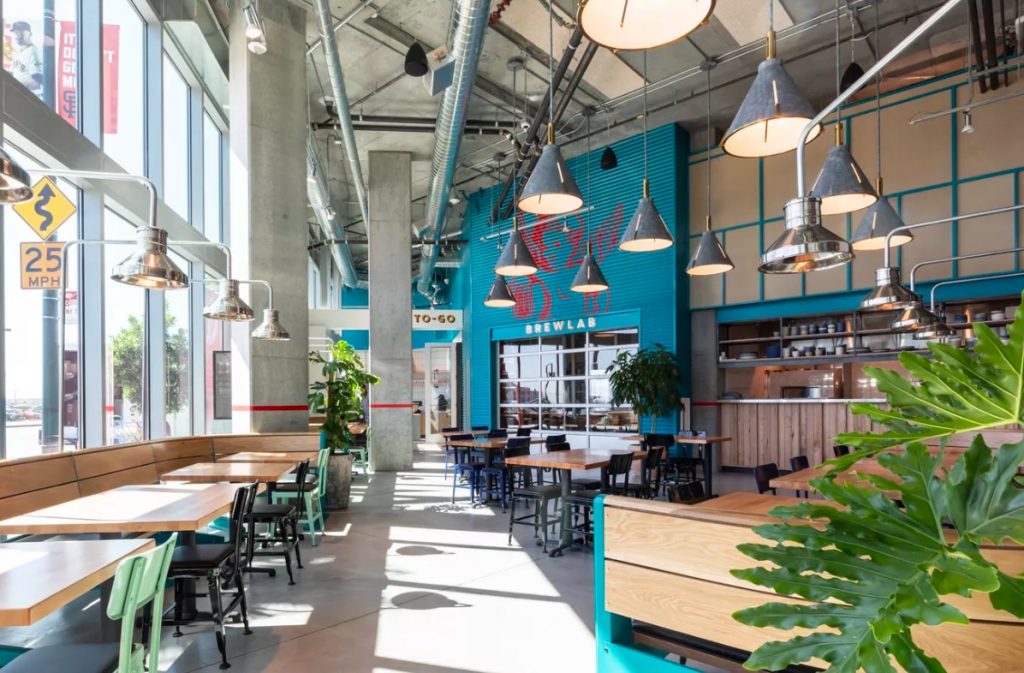 The first American outpost of growing brewery Little Creatures opens in San Francisco tomorrow, July 26, showcasing beers made with prized hops from Australia and New Zealand. Located between the Giants at Oracle Park and the Warriors at Chase Arena, the 6,300-square-foot Mission Bay taproom will pour 36 beers and serve an all-day food menu of pizzas, salads, and sandwiches to go with them.

Elsewhere in Little Creatures’ corner of the new One Mission Bay development, a “brewlab” will offer tutorials and room for events, and a to-go cafe will serve grab-and-go food and canned beer for retail purchase. Those cans won’t just be the pale ale and pilsner for which Little Creatures is already known: Head brewer Dennis Stewart will brew several SF-specific beers on-premises. Those are fermenting away in tanks behind a wrap-around bar in the large, sun-drenched taproom.

Little Creatures, named for the microscopic yeast busily making its beer, is a bit of a misnomer for the now sizable business. The 2000-founded brewery was purchased in 2012 by major Sydney-based beverage company Lion, a subsidiary of Japanese brewing giant Kirin. Locally, that puts little Creatures in the company of Anchor Brewing, the historic Potrero Hill brewery, which was also bought by a Japanese mega-brewer, Sapporo.

With its Kirin backing, Little Creatures has expanded from Down Under to locations in Singapore and London. But Mission Bay will be the brewer’s American proving ground. Here, they’ll go toe-to-toe for pre-and post-game crowds with local craft brewers like 21st Amendment, Magnolia Dogpatch, and a forthcoming location of Seven Stills.

Good beer and an enticing space will work in Little Creatures’ favor — as could an approachable food menu from chef Ian De Leoz. His selection of fried chicken sandwiches, beer-steamed mussels, and more is below.