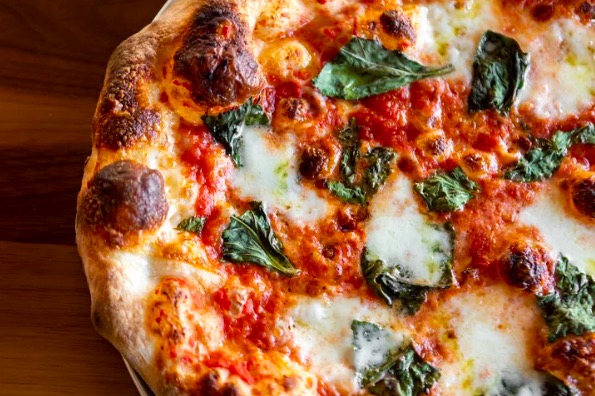 Inside Flour + Water’s New Pizzeria, a New Jersey Chef’s Ode to the Slice

Though the group’s flagship restaurant Flour + Water opened in 2009 with Neapolitan pizzas on the menu, it became quickly clear that pasta was the main draw (the pasta tasting menu is still a carb-lover’s dream meal).

“When we opened Flour + Water, within the first six or eight months, the concept evolved in a slightly different direction than we intended and it became clear that the heart of our menu was the pasta program,” says McNaughton. “[Pizza] took a back burner, but I just always dreamt of having a pizza joint with really craveable pizza. I love Neapolitan, but I don’t crave it.”

The result is a pizza with the char of a Neapolitan pizza (though McNaughton says the recipe is completely different), but a crust with crunch and the ability to withstand delivery. The menu includes five 13” red-sauce pizzas, and five white pizzas, all of which will be available for delivery or takeout, from pepperoni with pickled peppers to a speck pie with prosciutto, mozzarella, braised cabbage, and shallots.

The rest of the menu includes a selection of crunchy salads (there’s a variation of a classic chopped salad with olives, pickled onions, provolone, pepperoncini, salumi, chickpeas, and red wine vinaigrette), and antipasti like ricotta meatballs. And, despite McNaughton’s initial resistance: mozzarella sticks.

“These are the most labor intensive mozzaralla sticks in the world,” laughs McNaughton. “I really fought it, but we wanted to make it as fun and accessible as possible, with playful things on the menu.”

McNaughton’s version is only distantly related to the rubbery, frozen version often found at skating rinks and beach boardwalks; his includes batons of aged mozzarella rolled in flour and then dipped in a Venetian-style batter, rolled in seasoned breadcrumbs, deep-fried, and served with silky marinara sauce.

Similarly playful is the “big slice,” an enormous slice that’s available to-go only, from a special takeout window. It’s about half of a pizza, folded into a kind of pizza sandwich wrapped in wax paper, and it’s attractively priced at $8. There’ll be one option per day, as toppings will change daily, and sides of marinara and white sauce (a less herby ranch) are must-orders accompaniments for dipping.

For the final act, there’s Double 8 Dairy soft serve, in fior di latte or salted caramel (or, the superior choice, a swirl of both flavors), and topped with choices of chocolate sauce, rainbow sprinkles, extra virgin olive oil and sea salt, amarena cherries, or chili-infused Mike’s Hot Honey. (It’s also available alongside big slices at the takeout window, ideal for eating on the way to or from a Dolores Park session.)

The tightly curated wine list from Ne Timeas wine director Samuel Bogue is on the approachable side as well, with bottles ranging from $45-65 and every wine available by the glass. Flour + Water is also taking opportunity to serve its own private label of Italian-style wines produced in California. And, a spritz is on the menu, hot takes be damned.

Studio KDA altered the former Farina space with green Heath Ceramics tile and an Acacia wood counter, walnut-topped tables, and contemporary light fixtures. The large space includes table seating inside and out, plus the aforementioned counter seating, where diners can spy on the kitchen churning out pies. There’s also a very legit patch of outdoor dining, with 30 seats available.

It’s all walk-in (though there’ll be an online waitlist). When it opens on Monday, June 3, hours will be 11 a.m. – 11 p.m. (delivery through Caviar will start in the next few days).