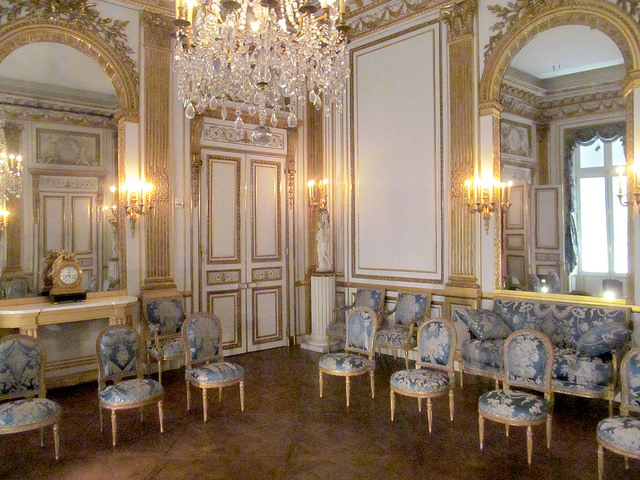 Editor’s note: This article was originally published in 2017. It has been updated with the most recent information.

We asked Curbed SF readers to nominate buildings with the most beautiful interiors, posing the question, “What interior spaces make you say, ‘whoa’?”

The readers’ picks that rolled in didn’t disappoint, from hotels to churches to bathrooms. And one thing we learned is that a trip to the dentist office is made a little less painful by the awe-inspiring decor of one Art Deco structure.

And now, the 22 most beautiful interiors in San Francisco, as chosen by Curbed SF readers, listed in order from west to east, as well as a few places selected by our editorial staff.

Of course, this is by no means a complete list, so please keep the conversation going by sharing your favorite interiors in the comments section. We will continue to update with more spacious beauty as you give it to us.

1 The Salon Doré at the Legion of Honor

The best example of French Neoclassical interior architecture in the United States, the Salon Doré (which moved from the Hôtel de La Trémoille in France) at the Legion of Honor is possibly the most gorgeous room in all of San Francisco.

Also known as the Joy of All Who Sorrow, this Russian Orthodox Church is one of the largest of its kind outside of Russia. The interior features vibrant mosaics, detailed religious paintings, and a crystal chandelier. 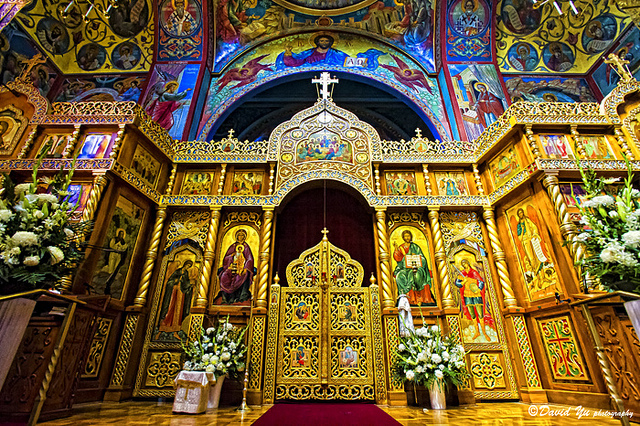 Ever since 1879, the conservatory of flora has dazzled many with hundreds of species of flowers and plants. This Victorian-era beauty has been promoting flower power well before the hippies and their patchouli-laced summer of love.

Built in 1956 by H.C. Baumann, this space was designed in the modernist style with Art Deco details. Most noteworthy is the ceiling with exposed beams and detailing.

Inspired by the Columbian Exposition of 1893 in Chicago, architect Bernard J.S. Cahill designed this gorgeous ode to the deceased resulting in a structure that’s beautiful inside and out. The eight rooms on the ground floor bear the names of the mythological winds. Six of the ground floor rooms boast stunning stained glass windows.er in design. A home for the dearly departed has never looked so alive.

6 Cathedral of Saint Mary of the Assumption

Loving rechristened Our Lady of Maytag by locals, due to its washing machine agitator-like exterior, the interiors merit just as much fanfare. Built well before the advent of social media, this midcentury-modern church is blessed with many Instagrammable moments.

According to Curbed SF reader Loop Seven, “It’s not ornate and likely considered unremarkable but I think it really captures late 1970s design.” Indeed. Opening at the start of 1980, the Hayes Valley behemoth, designed by Skidmore, Owings & Merrill and Pietro Belluschiexemplifies modernist ’70s style. The addition of the Fratelli Ruffatti electro-pneumatic pipe organ, boasting 147 ranks, was added in 1984. It later underwent a major acoustic overhaul in 1992, resulting in the look we see today.

Taking almost 40 years to finish, this circa-1964 gem atop Nob Hill is a celebration of French Gothic revival. Soaring ceilings, sweeping arches, tall stained glass windows, and more give this church a holier than thou look that brings tears to the eye. According to Grace Cathedral’s website, “The cruciform plan, twin towers, central fleche and polygonal apse are all French in origin, with the cathedrals of Amiens, Paris (Notre Dame), Beauvais and Chartres being principal influences.”

There are many stunning rooms inside the grande dame of San Francisco hotels, but the penthouse is the best. Clocking in at 6,000 square feet, it rents for $18,000 a night. Created in the 1920s by American archeologist and art historian Arthur Upham Pope, the penthouse maintains the majority of its original charm—e.g., the vaulted billiards room that’s entirely covered in floor-to-ceiling Persian tiles—even though it underwent an extensive remodel by Alexandra Champalimaud, principal of Champalimaud Design, in 2010.

Atop the famed Westin St. Francis in Union Square, Alexandra’s is located on the 32nd floor of the Tower Building, with floor-to-ceiling windows boasting skyline views of San Francisco, including Coit Tower and both the Golden Gate and Bay Bridges.

“Next to the lead garden court in the Palace, 450 Sutter’s Mayan Deco facade and lobby are memorable, singular and spectacular,” says reader AngelusLiving. “Unfortunately, my dentist was in this building when I was a kid, so it was all a bitter-sweet experience when I visited.”

This Union Square loo is noted as one of the most beautiful public bathrooms. Replete with Art Deco trimmings, this bathroom features Italian marble, chandelier with carved ceiling medallion, and full-length stainless steel stall doors. Designed by Timothy Pflueger, one of the city’s foremost Art Deco designers, Timothy Pflueger Blog notes: “Upon entering the bland powder room for putting on lipstick, unsuspecting patrons are sometimes surprised by the gorgeous interior in the next room. Black green marble covers the walls, contrasting with a gold-leaf ceiling. A glass chandelier hangs from an ornate bronze ceiling mount. Floor length antique mirror doors provide privacy in the stalls, and white-veined marble sinks sit nestled in bronze pedestals.”

The renovation of the Westfield San Francisco Centre was well worth the wait. The top floor of the mall features a restored dome as well as a lounge area to relax after swiping your credit card one too many times.

Tiffany-style and antique gas lamps, woodwork, mezzanine seating, and historic photos galore—at this North Beach institution, more is more. Before the antique trend came (and went) inside many newfangled craft cocktail bars, this institution was serving up ye ole style in the form of casual, mish-mash maximalism.

If there’s a coffered ceiling as nice as the one found inside the One Montgomery Wells Fargo branch, we have yet to see it. Lovely.

In addition to housing the oldest continuously operating chess club in the United States, the Mechanics’ Institute, a nine-story landmark building in the Financial District, also boasts one of the chicest stairwells in the city. So much so, in fact, that’s it all over the library’s Instagram page.

The lobby of the Merchant Exchange Building—the preface to the Julia Morgan Ballroom, if you will—is a sight unto itself. Morgan designed the hall’s marble Ionic columns, coffered ceiling, and vaulted skylights. The famed architect also commissioned maritime artist William Coulter to paint the hall’s five murals.

The coffered ceiling and patterned carpet—a match made in interior design heaven. Julia Morgan’s titular ballroom is the place to get hitched for those with an eye on decor. Of special note is the 15-foot-tall, hand-carved stone fireplace. Glorious.

Hosting many swank soirees and international treaties, the Palace Hotel’s Garden Court was declared a San Francisco Landmark in 1969. It was also featured in the final scene of David Fincher’s The Game. But above all else, it’s quite the stunner. The beautiful glass ceiling surrounded by lush plants make it one of the city’s most important and iconic interiors.

Punctuating this tony private club in the heart of the Financial District is Diego Rivera’s The Allegory of California, a large mural that flanks the staircase.

Numerous businesses call this place home, including Yelp. And many of you gave this 1925 Art Deco structure five stars when it comes to the interior lobby.

The building was designed by architect Timothy Pflueger, whose work includes some of San Francisco’s only Art Deco architecture. When Pflueger designed 140 New Montgomery, he had just completed the Castro Theater. He used influences from Asia, such as the lobby adapted from a Chinese brocade, and from the Sierra Mountains. From ornate ventilation grates to dark marble walls, it would be a shame for passersby not to sneak a peek.

The sea-green Art Deco post office near the Embarcadero features 27 murals, all part of Anton Refregier’s History of California (1941-48).