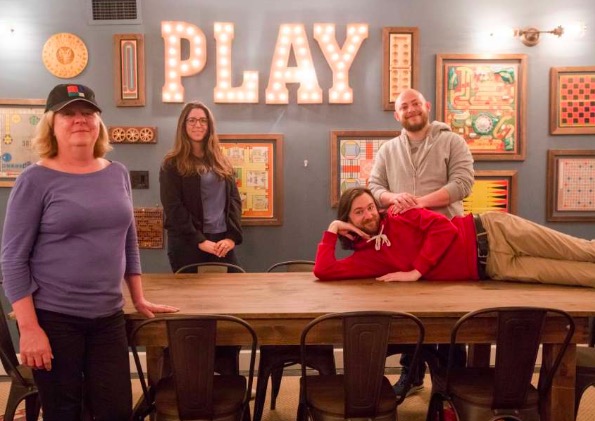 The employees at Palace Games – an escape room company located behind a nondescript door at the Palace of Fine Arts in San Francisco’s Presidio – have encountered some things. They’ve seen six marriage proposals. They’ve seen a grandpa heedlessly dive headfirst down a slide, safety be damned, only to bust his head open (“It was worth it!” he apparently cried as blood streamed down his scalp). They’ve seen a drunk guy pick a fight with his friends for solving puzzles too slowly for his liking, only to get dumped on his birthday.

You learn a lot about people working at an escape room.

“We definitely judge the groups,” joked Andrew Holmgren, one of four hosts at Palace Games who also works as a comedian.

At some venues, the rooms are outfitted with surveillance cameras so employees can watch each group progress through the series of puzzles. At Palace Games, though, there’s no such visual aid for staff when they step out of the rooms they’re hosting, just plywood walls and a series of telltale sounds employees know well enough that they can figure out how far a group has progressed in a room without being able to see them.

For most visitors, it’s a wholesome and fun-filled experience. They get to marvel at the fireplace from the 1915 World’s Fair and the rich mythology of the rooms’ backstories. They find empowerment through being the one to notice a particular clue, or reconnect with a childhood love of puzzles and games.

Sometimes, though, things get messier.

“Some guy got broken up with here. He showed up for his birthday all drunk, and we do not encourage people to be drunk here,” said Holmgren.

“He was comin’ in real hot,” said Greg Gettle, another comedian-host.

“And it was almost like his whole friend group met him at a bar and didn’t want to drink so he was like, alright, more for me! ‘Cause he was hammered,” said Holmgren.

When he was shown to the room, the drunk man bowed deeply. This did not ease the apprehension of the hosts.

“We were like, ‘Oh no this is gonna be really bad, this is gonna be terrible,’ but he was like a wasted savant. He was solving every puzzle!” said Holmgren. “It was really cool until it turned into a screaming match and he got broken up with.”

The fight started because the drunk man’s friends were not puzzling quickly enough for his liking, the hosts recall.

“He tried to help and did the opposite,” said Gettle.

Families, too, can be particularly rich with quirks to observe.

“I’ve noticed the kids will yell at the moms a lot,” said Ziomek.

“I had one father yell at the whole family, ‘There’s only one general in this family!'” recalled Palace Games Manager Allie Jorde.

Another memorable dad put his son in a straightjacket to take a photo, then made a few too many jokes about whether or not he could take the straightjacket home with him, remembers Holgren.

It’s not just families, though. Groups sent to the escape room for corporate team bonding exercises also have their messy inner workings laid bare as they work to solve the puzzles.