San Francisco, a city that prides itself on its neighborhoods, has never seen anything like the one taking shape south of Market Street right now.

Blocks once covered by freeway ramps are sprouting glitzy residential towers. A park is planned below a bridge reserved for commuter buses. On broad sidewalks, shrubbery and miniature dog runs separate pedestrians from cars.

This is the third and final installment in The Chronicle’s exploration of the changes reshaping the blocks west of the Embarcadero. Part 1 examined the new Salesforce Transit Center and its troubled history. Part 2 focused on Salesforce Tower and how it reflects today’s San Francisco.

All this is the fulfillment of 15 years of planning based on the premise that a high-rise neighborhood, where people of all incomes live and work near transit of all kinds, can be a good fit for San Francisco. But only in the past five years have the plans begun taking form in real life, with short buildings making way for tall ones and parking lots becoming construction sites.

It’s a still-ragged transformation of the area around the new Transbay Transit Center.

Sidewalks and traffic lanes are open one week, closed the next. Three huge buildings near Fremont and Mission streets, two extra-tall towers and the quarter-mile-long transit center itself, aren’t quite finished. Others are just beginning to climb out of the ground.

Still, things are far enough along to get a sense of the new urban landscape. It’s an environment more akin to New York or Chicago than Nob Hill or Noe Valley — and city planners already are applying what they see as its lessons in two other nearby districts.

Barnes and her husband, Andy, moved from their loft near AT&T Park last year to the 24th floor of Lumina, a two-tower complex with 656 units. There’s a round-the-clock concierge and such amenities as a soundproofed music room.

Sales prices range from $900,000 to more than $9 million. Forty percent of the residents moved from within the city and 40 percent from the greater Bay Area, developers say, while 10 percent of the buyers are from abroad.

Cheng’s home is more modest: a one-bedroom apartment at 280 Beale St., an eight-story building developed for low-income residents by nonprofit Mercy Housing. Its extras are limited to a laundry room.

The 70 units are reserved for families who earn less than 60 percent of the city’s median income. All come from within San Francisco, and there were 5,500 applicants for the available apartments.

“It was a miracle — I did not think it was going to happen,” said Cheng, 31, who moved with her daughter from transitional housing in the Tenderloin late in 2015. “It’s been really, really great for us.”

The neighborhood Cheng and Barnes share still exists more as a plan than an actual place, yet has changed immeasurably in the past decade.

Some changes can be quantified: Salesforce Tower, at First and Mission streets, tops off at 1,070 feet, 217 feet taller than the Transamerica Pyramid. There are 1,255 more housing units along Folsom Street than five years ago, with 1,486 more under construction. Facebook’s first San Francisco office will be at 181 Fremont St., filling 34 floors of a 55-story tower.

Other shifts are perceptual, signs of life amid construction and “coming soon” advertisements. People spill from towers and stride toward the Financial District in the mornings. Couples walk dogs or push strollers on weekends.

“There’s so much energy. I feel plugged into the pulse of the city,” said Sara Barnes, 71, who retired after a career in organizational management. “I remember driving here 20 years ago and thinking it was a no-man’s land. Now it’s really taking off.”

The takeoff is spotty: Many of the retail spaces are vacant or cater to specialized niches. At the first complex to open on Folsom Street, the block-long Infinity, the retail tenants are a cosmetic oral surgeon and Prospect, a restaurant whose appetizer menu includes “crispy pig trotter and Spanish octopus.”

This helps explain the instant popularity of Woodlands Market in Lumina, a branch of the small Marin grocery chain. It’s just 9,000 square feet, but that’s enough to make it the largest market in the area by far.

The shelves include the basics, but also jars of marinated anchovies from Italy. The freezer holds $13 pints of sheep’s milk ice cream. In a locked display case are $260 bottles of Cristal Champagne, while the beer display includes Icelandic White Ale.

Shelves are one row taller than when the market opened in August. Closing time is one hour later, 10 p.m. In spring, the market will add a small pet shop.

“There are fewer kids here than we’d see in Marin — that was to be expected — but a lot of these people have pets,” said Woodlands owner Don Santa. He described the clientele as “a lot of tech professionals and people who live in the nearby towers. Sushi is doing phenomenally well.” 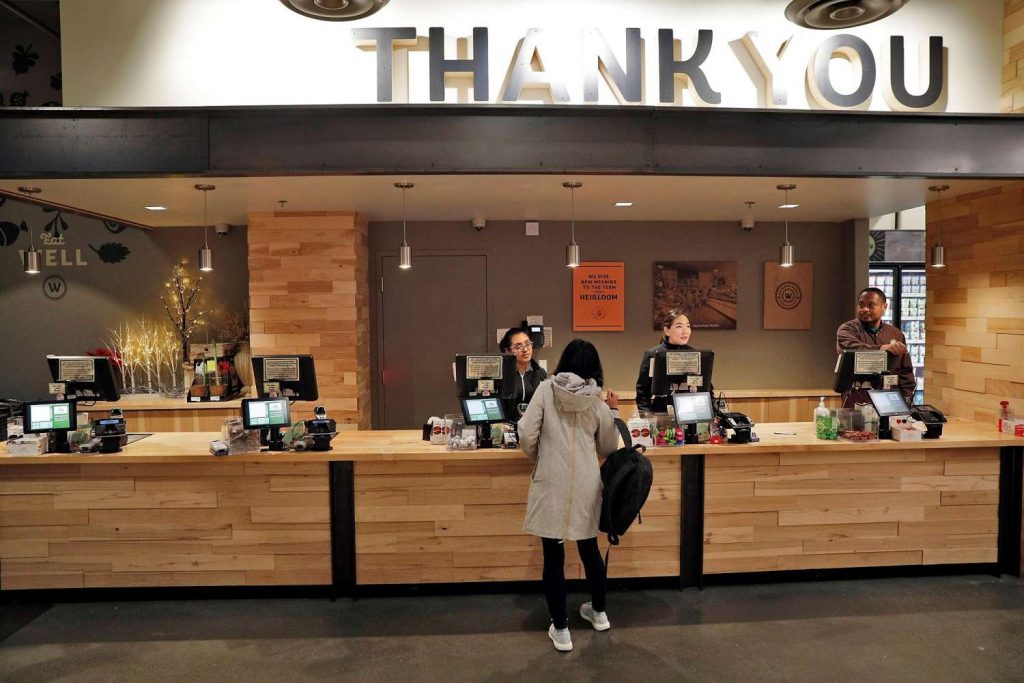 For her part, Cheng continues to rely on the Costco that’s 12 blocks to the west, or the Safeway in Mission Bay.

“I went to look around and check out the prices,” Cheng said about Woodlands Market. “I don’t shop there.”

Asked to compare her new surroundings to the Tenderloin, Cheng paused.

“There are pros and cons. This neighborhood is much more sterile, and not that friendly to children,” Cheng said. On the other hand, “this building is a lot more secure, and the area is so much cleaner. … I’m grateful to live in a place like this. I only wish there was more for a family like ours.” 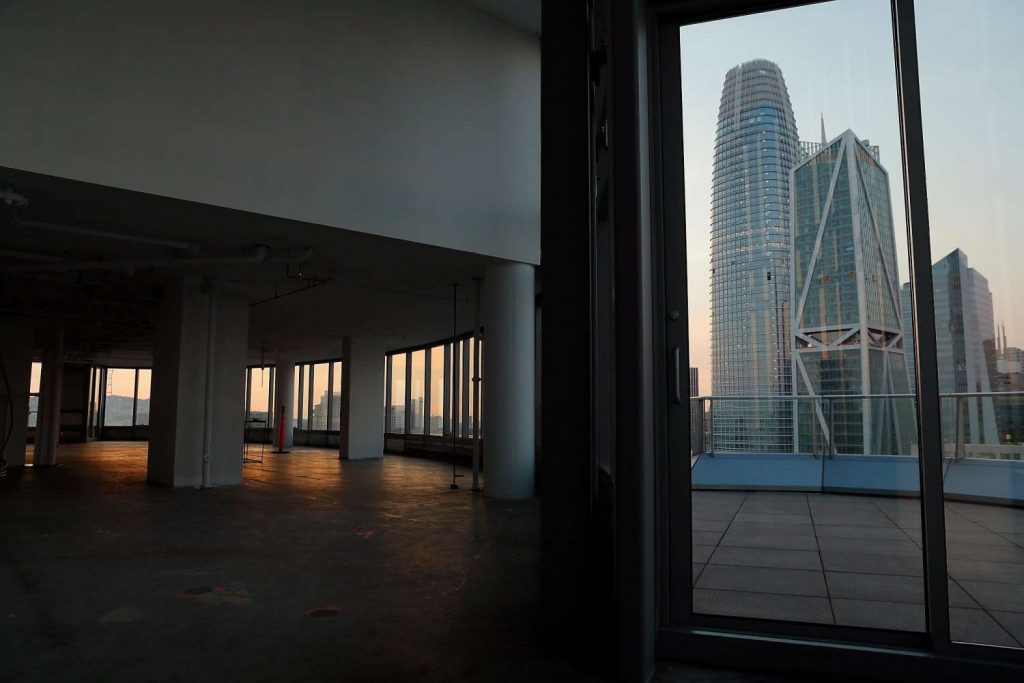 Ten years ago, the block where Lumina now stands was a parking lot for the U.S. Postal Service, which had a processing center next door. The site of 280 Beale was bare land, having been covered by freeway ramps until 1993.

Those ramps and others were torn down following 1989’s Loma Prieta earthquake. They had connected the Bay Bridge to the Embarcadero Freeway. After the freeway was damaged in the earthquake and then razed, the ramps served no purpose.

Another decade passed before planners focused on the leftover land. What emerged was an approach that embraced social aims, and used extra density to help pay for them.

That vision is found in the city’s plan approved in 2012 for what’s known casually as the Transbay area — the blocks bounded by Second, Mission, Spear and Folsom streets.

Height limits were raised on the ramp sites and nearby lots to generate money for rebuilding the Transbay Transit Center as a 21st century transportation hub. In addition, more than 30 percent of the expected 4,500 housing units will be set aside for lower-income residents.

Another goal is to craft a vertical landscape that feels good on the ground. Fees charged to the developers are earmarked in large part to improve the sidewalks and streets, a financial resource that allows the area’s more forlorn blocks to be retooled with pedestrians and residents in mind.

“Our focus was on creating livability in a high-density neighborhood,” said Joshua Switzky, who led the city’s planning efforts in Transbay. “What’s important to me is walking around, seeing how the details are resting on the streets.”

On a recent walk, Switzky happily pointed out the flax and fountain grass that enfold benches alongside the future pet shop, a naturalistic alcove open to all. Other spots make him wince, such as the lone row of maple trees on Main Street. A parallel row was planned, but underground utility lines got in the way.

“We don’t always do greening very well in San Francisco,” Switzky said. “But we removed traffic lanes to widen the sidewalks, and you can really feel the difference.”

There’s less room to maneuver on the first block of Tehama Street, an alley that’s also a distilled example of Transbay in flux.

On it you’ll find a row of five ramshackle structures from the early 1900s — one a former sheet-metal factory clad in its product, made up to look like brick and stone. Across from them is 235 Second St., six discreet stories from 2001, when the dot-com boom stirred interest in the once-remote blocks between the Transbay Terminal and Rincon Hill.

The sheet-metal survivor and 235 Second both are shadowed in the morning by tapered ramps as sleek as concrete can be, a bus-only expressway between the Bay Bridge and the new transit center. Beneath it will be a public park intended as an active recreation zone, complete with swings hanging from the ramps.

The park isn’t scheduled to open before 2020, but another of its neighbors debuts in January — 33 Tehama St., a 35-story glass apartment tower.

The marketing slogan: “All of San Francisco in one address.” Monthly rents start at $3,625. 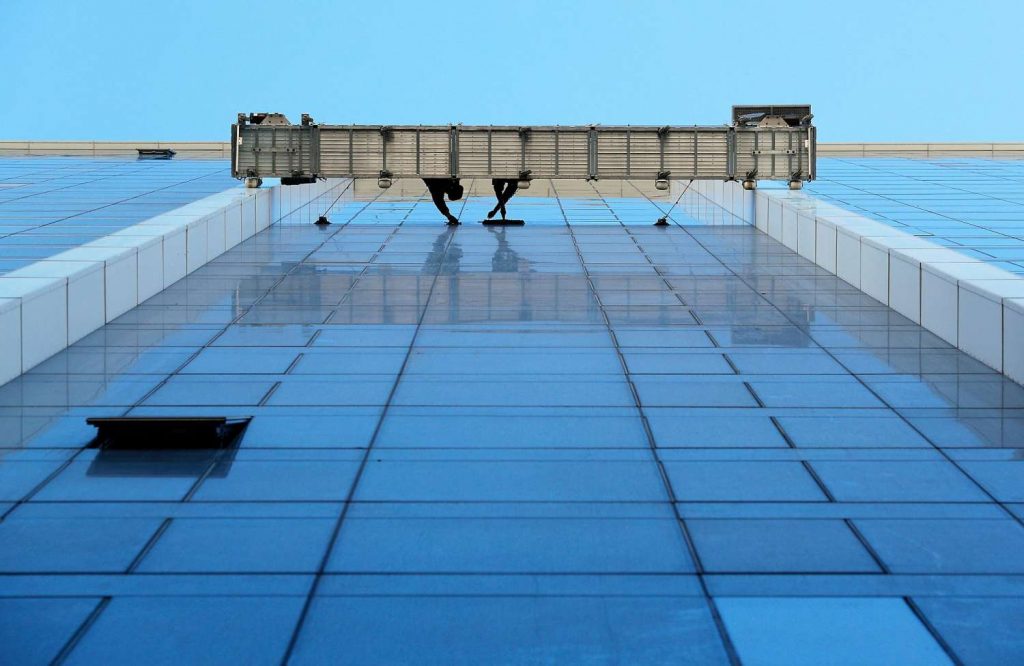 In addition to 33 Tehama, two towers are nearing completion and six are under construction. There are two approved on the 500 block of Howard Street. A pair of parcels controlled by the Transbay Joint Powers Authority, which is selling off the former ramp land to help fund the new $2.2 billion transit center, await development.

While all this goes on, San Francisco’s Planning Department is working to rezone two areas: the blocks around Market Street and Van Ness Avenue, and 17 blocks in the area it calls Central SoMa, west of the Moscone Convention Center. In each case, extra height and density would be tied to hefty fees charged on a per-development basis, the money then used for such localized improvements as new sidewalks and parks.

The main lesson applied from Transbay is that “if you really want substantial benefits to come to an area, you need a certain (extra) amount of density,” said John Rahaim, the city’s planning director since 2008.

In terms of Transbay’s progress, Rahaim is enthusiastic — with a caveat.

“In general, the area is turning out great. Development is doing what it needs to do,” Rahaim said. His reservation: “It needs to be a little messier. Because so much is so new, the streets do feel a little sterile. … The amenities aren’t all in yet.”

“Sterile” is the same word Cheng uses. As for publicly funded amenities, the single mother at 280 Beale awaits the arrival next year of a playground a block away — albeit one perched 70 feet in the air.

It will be part of the transit center’s 5.4-acre rooftop park, an elongated retreat conceived by PWP Landscape Architecture as a procession of varied spaces. There will be an amphitheater as well as a grassy meadow. Colorful gardens are intended in part to provide eye candy to nearby towers, while the play area was included with nearby families in mind.

Meanwhile, the three tower projects being built along Folsom will include retail spaces and 25-foot-wide sidewalks. The 1,486 housing units they contain will include 415 for lower-income residents.

But creating a genuine community from people with different income levels and backgrounds isn’t as simple as making a plan.

The residents at 280 Beale, for instance, have access to a lawn in the middle of the block that their complex shares with Solaire, a market-rate apartment tower developed at the same time.

Cheng’s experiences there are mixed at best.

“It’s supposed to be a shared space, but it doesn’t really feel like it,” Cheng said. “We’ve gone down to play a couple of times. When I start talking to another adult and they learn I live in the ‘other’ building, there’s a definite change of tone.”

Sara Barnes, a social worker early in her career, is rooting for the city’s planning ambitions to pay off.

“I believe in social equity for a selfish reason: People who perform all the services that we need have got to be able to live nearby,” she said. “San Francisco’s affordable housing crisis is real. If we try to solve it the way we always have, we’ll only make it worse.”