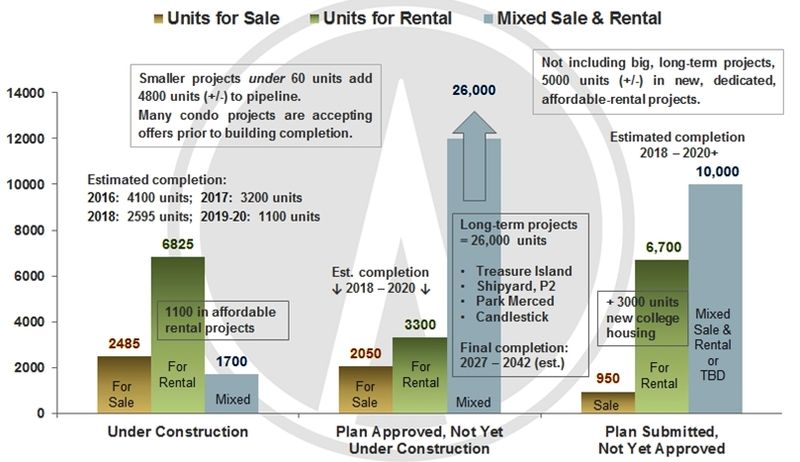 Right now, San Francisco has more than 11,000 homes under construction, slated to finish before 2020. That’s pretty good by our usual standards, but more than 31,000 additional units that the city has approved are waiting in the wings but haven’t broken ground yet.

Those figures come out of a report released today by real estate group Paragon looking at market trends on multi-family buildings. Overall, sales and prices of big buildings are up for 2016, though only a bit. Paragon recorded 34 buildings sold since July, 474 units in all, for a mean price of a bit more than $463,000/unit, or $200,281,000 for the lot of them.

Looking to the future, Paragon analyst Patrick Carlisle has noted more than once this year that we’re seeing more construction of rental property than property for sale in San Francisco for the first time in generations, by a factor of almost 3:1 just in the buildings underway right now.

As for projects yet to come, almost all of the planned but not yet initiated buildings (26,000 of the 31,000 unbuilt units) come from a small number of huge, ambitious mixed-use developments in places like Candlestick Point and Treasure Island.

The timeline for those is natural pretty long: The final brick won’t be in place until 2042 or so, unforeseen delays of course not included. A less ambitious but still welcome 5,350 units are idling their engines to finish by 2020, but haven’t started yet either.

Assuming buildings in waiting get off the ground (or planted into it) as scheduled, that’s 16,360 new homes over the next three or so years. The city and census usually peg San Francisco’s average household size at 2.3 persons; even if that were to decline drastically to somewhere closer to two people per household, that’s still enough homes for the influx of 30,000 new persons the Planning Department estimates are on their way during that time.

But that also means that we’ll only break even in terms of housing shortages, so it might not move the needle much in terms of prices. Carlisle notes that rents seem to be down across the city (presumably owing somewhat to all of the construction) but he also points out that almost all of the building is on the highest of the high end.

“I suspect that the decrease in rents is happening mostly at the high end too,” Carlisle tells Curbed SF. This would explain why rents have consistently declined all year but haven’t provided much relief to middle class renters; if someone previously paying $8,000/month is now only paying $7,750, it may be hard to suss out exactly where that’s trickling down to the rest of us.

Which makes those tens of thousands of mixed-use units on the horizon all the more tantalizing. If you have patience for the waiting game…