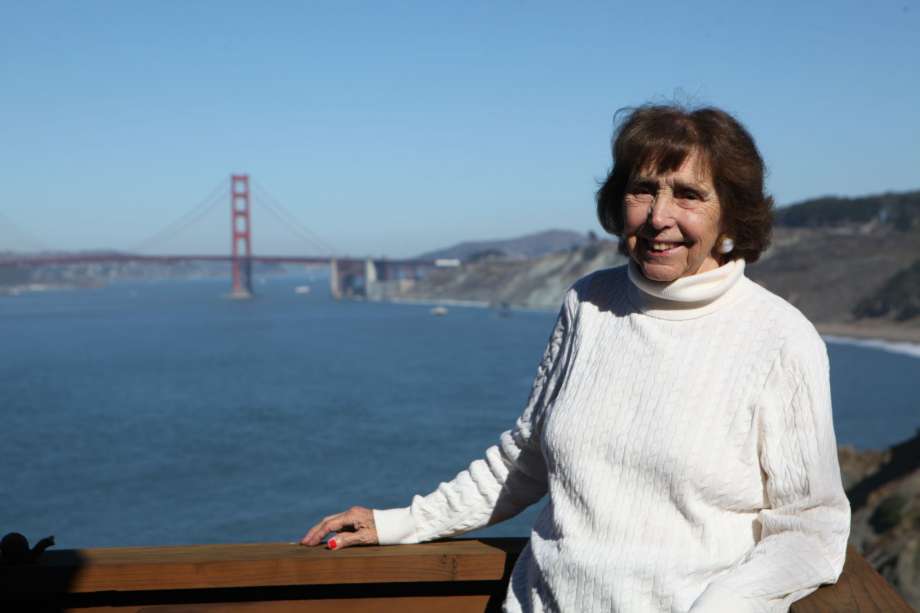 Every now and then, Beverly Coughlin drives from her Sea Cliff home to the marina near St. Francis Yacht harbor. As young people pass by, little dogs trotting behind them, and the boats bob on their tethers, the San Francisco native sits and reflects on her 92 years in the city.

People have come and gone in the nine decades Coughlin has lived here. One thing that hasn’t changed is the beauty of the place.

“Every time I come back across that bridge and see the city, I always feel so good,” Coughlin said recently from her home, the back windows of which look out upon the Golden Gate Bridge. “How lucky I am to be living in this city.”

Today, we often talk about how San Francisco has changed, how the people and places that gave the city its flavor have long since fled. What was the city like way back when? SFGATE is investigating by speaking with longtime natives. We begin the series with Coughlin, who comes from a long line of San Franciscans. Two of her grandmothers were born in the city, as were her parents. Within the Bay Area, her genealogy stretches back even further; Coughlin’s great-great grandmother belonged to the a Miwok Indian tribe, which dwelled along Tomales Bay.

Coughlin entered the picture in 1926, three years before the Great Depression hit. Her earliest memories originate from 2560 Polk Street, where she lived with her parents and grandfather.

Rent was $34 a month, “and we couldn’t always pay it,” Coughlin said. She remembers hiding from Mr. Zapatiti, the landlord, when he’d bang on their front door for payment.

Though money was tight, free entertainment was easy to find on the street. Between school and supper, the children of the neighborhood would stumble onto the sidewalks and play — games like kick the can, jacks, hopscotch. When mom hollered, “Dinner’s ready!” from the window, the kids would meander back to their apartments.

Weekends were spent walking, from the corner of Franklin and Filbert streets up over Telegraph Hill to Coit Tower and beyond. Coughlin said she and her friends would pick flowers from the front yards of the wealthy homes along Pacific Heights, which they’d mix into homemade perfumes in their parents’ kitchens.

Coughlin slept in a pullout bed in the dining room, while her grandpa used the living room and her parents took the lone bedroom. Fortunes changed when World War II started. Coughlin’s father got a job on the shipyards in Richmond, and Coughlin, who intended to study at UC Berkeley, went to work as a secretary for a steamship company. She made $135 a month.

“I thought I’d go to college in the fall, but I never did,” she said. Instead, she stayed on with the steamship company for seven years.

The 1940s are Coughlin’s favorite decade in the city, she said. Though it was wartime, San Francisco was bustling with activity and commerce. She remembers going to dances at the Fontana Macaroni factory, where she and her companions would mingle with the sailors and soldiers. Sometimes they’d take the girls on boats to Fort Cronkite.

Coughlin married her first husband, a soldier, two years after the war. They lived for a few months in Japan, before her husband was shipped to Korea. He died soon thereafter. Coughlin claims he was the first San Franciscan to die in the Korean War.

Two year later, she married Warren Coughlin, a longtime acquaintance who worked for his father’s trucking business. It was one of the first companies that ran between the Bay Area and Los Angeles.

The young couple rented an apartment in Stonestown before settling in Westlake and then Forest Hill, where they raised their children. In their fifties, Beverly and Warren bought a house in Sea Cliff, for which they paid around $400,000. Warren died in 2006, but Beverly remains in their longtime home.

In her 40 years there, Coughlin says she hasn’t noticed the neighborhood change much — though her neighbors certainly have.

“It’s changed in the sense that people are always adding (to their homes),” she said. “The construction next door has been going on for almost three years. The man next door is threatening to add as well.”

That man is Jack Dorsey, the CEO of Twitter. Coughlin’s other next-door neighbor is Hock E. Tan, the CEO of Broadcom. Billionaire hedge fund manager Tom Steyer is just up the way. From Coughlin’s balcony, across the sea, you can spy the former home of Robin Williams, as well as the sprawling abode of Salesforce CEO Marc Benioff.

Coughlin doesn’t seem fazed by the powerful men around her. “I was never aware the ‘tech billionaires’ were here,” she says. The transformation of the city by the tech industry hasn’t much affected her lifestyle.

Most of her days revolve around the types of activities she’s long participated in — things like Rummikub at the Olympic Club, visits to the symphony, trips to the Russian River, or simply “hanging around and looking at my view.”

After 92 years in the city, it’s hard to imagine ever leaving.

“Until I really have to leave this house, I’m not going to,” she says. “I still love this city.”

SFGATE asked Coughlin a series of questions about growing up and living in San Francisco for nine decades. You can read her answers in the above gallery.