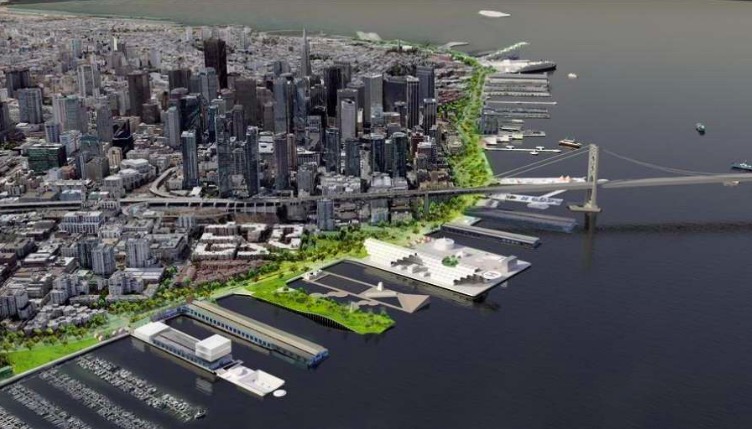 More than any thoroughfare in San Francisco, the Embarcadero brings together the elements that make today’s city so compelling, no matter the difficulties it presents from day to day.

Watery vistas unfold between atmospheric historic structures, with Fisherman’s Wharf at one end and AT&T Park at the other. Cultural destinations like the Exploratorium are interspersed with high-end restaurants. On the inland side, there’s a progression of distinct districts, with a short walk to such attractions as South Park and the Filbert steps.

If fresh proof is needed, consider the 52 — fifty-two! — responses to the Port of San Francisco’s recent “request for interest” on how to revive the most troublesome piers along the 3-mile way.

Some are from long-shot dreamers, such as the commercial pilot who wants to build a 150-foot-tall gondola at Pier 29. Others are from global actors with financial heft, including several major developers. The common thread: They’re all drawn to the setting despite the costs and politics and long-term threat of sea level rise.

No matter how functional or far-fetched, the cross-section says a lot about the perceived needs — and opportunities to reap profits — in a city that has been in a state of relentless boom since 2012. The larger issue is what comes next for the 14 aged bayside buildings that have defied rebirth despite everything that’s happened around them.

The exercise was unusual in that it’s not a competition. The port posed a question, then waited to see what the answers might be.

“What we get is information,” said Rebecca Benassini, the port’s manager for the effort. “The categories of uses that people are interested in, how they’ll ensure a public orientation and what we might expect” in terms of financial investment.

Respondents filled out a nine-question form, but weren’t asked to present detailed proposals. The questions focused on who would be involved, a pitch-like distillation of their idea and how the concepts would fit within the district’s cloak of regulatory protections.

When port staff presents its findings on Dec. 11 to the commission that oversees the autonomous city agency, the gang of 52 won’t be ranked in order of preference or anything like that. Instead, the port will seek focused requests for proposals next spring for as-yet-undetermined piers.

For now, the responses give a sense of what is desired — and what is in demand.

The former is seen in several conceptual proposals for subsidized studios and offices that would “preserve permanent, below-market-rate spaces for arts and culture” in the words of a submission from the Community Arts Stabilization Trust. The would-be Museum of Dance would even include apartments for resident artists, though housing is forbidden along the Embarcadero waterfront under state regulations.

A much different museum would showcase “Future Sports” — essentially a venue for drone racing and robot fights and the chance to watch video gamers in the flesh.

The market demand, no surprise, is office space conceived with Silicon Valley in mind. The Cambridge Innovation Center proposes adapting Pier 19, a large but now-vacant pier, “to develop and strengthen innovation capacity in the city.” Which has the airy ring of hype — except that the firm provides space for 1,800 startups in six other cities.

Another development team proposed redoing Piers 19, 19½ and 23 as a “commons” with flexible space for out-of-town universities as well as businesses. If this sounds like a glorified WeWork, no wonder: The co-working giant would manage the space, according to the development team of Pacific Waterfront Partners and Portman Holdings.

Several large developers confined their expressions of interest to vague promises of doing something that pencils out and has space for public activities. Other firms likely are watching from the sidelines — waiting for next spring’s formal competition.

“The average developer doesn’t want to reveal an idea or give away a formula too early,” suggested Richard Mullane. He heads the San Francisco office of Hassell, an Australian design firm that has worked extensively on the Sydney waterfront.

In an ideal world, as Hassell has proposed in its ambitious submission, the port would look at the Embarcadero holistically. It would couple the desire to upgrade historic piers with the need to prepare the waterfront corridor and its eclectic structures for sea level rise. Redevelopment efforts would be levers to generate imaginative public benefits spelled out in advance.

A proactive yet pragmatic approach.

Realistically, though, the port’s financial options are limited. The costs of bringing aged piers to current seismic standards are daunting. The port also is boxed in by the public’s idealistic expectations of what should be — such as endless public access and an enduring sense of the past — coupled with second-guessing from watchdogs happy to attack anything they deem unworthy.

In the process, efforts to revive piers come and go almost as frequently as Fleet Week’s naval vessels. Often for the better, as with the Warriors’ effort to build an arena on Piers 30-32. At other times with regret, such as efforts for short-term reuse of several piers that were abandoned by developers as structural costs continued to mount.

By casting the net as it has, the port takes the discussion in a fresh direction. It also creates an opening for little guys to catch the eye of big developers. This applies to ideas like the Royal Cuckoo’s notion of a waterfront cocktail lounge with a pipe organ. The operators already have a popular bar and market in the Mission District — a developer might see a chance to humanize a large proposal by including room for a bit of local charm.

Whatever lies ahead, the 52 proposals capture a moment in Bay Area history when everyone wants a piece of the action, from community based nonprofits to international forces to individuals with high hopes. And if you want to make a splash, the Embarcadero is the place to be.