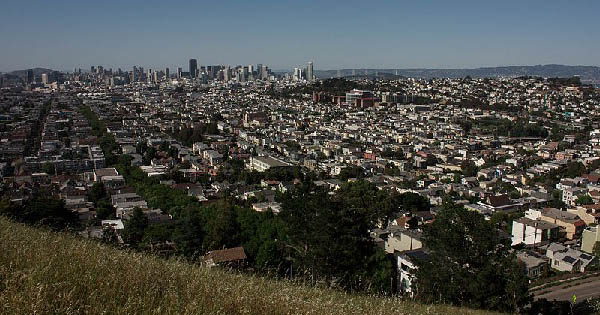 One of the best features of San Francisco is that you can go pretty much anywhere in the city and see a stunning view of something, whether it be a historical landmark, a renowned bridge, the ocean, or the entire city (ahem, Twin Peaks). While almost every neighborhood can boast good views, we’ve come up with a list of the five San Francisco neighborhoods with the best views.

Beautiful parks, gorgeous architecture, world famous cuisine … this city has a lot to offer. If you’re looking to buy a home in San Francisco and want a neighborhood that features the best views of the city, these are our top five recommendations:

The hills of Bernal Heights saved this neighborhood from the devastation of the 1906 earthquake and are also well known for providing panoramic views of the city. This beloved neighborhood has a history of being community-friendly and is combines the best of residential serenity with the vibrant Cortland Corridor with its vibrant mix of boutiques, destination restaurants, and nightlife.

There are several spots in Bernal Heights to catch spectacular views of San Francisco. Take a stroll through Bernal Heights Park to see both bridges, the twinkling lights of San Francisco’s downtown, Sutro Tower and Twin Peaks, and the East Bay. Precita Park and Holly Park also provide great views. If you want dog-friendly, family-friendly parks with great hiking trails and impressive views, Bernal Heights is the neighborhood for you.

The north slope of Bernal Heights includes views of the city and the south slope has some of the best weather in San Francisco, earning it the nickname “the banana belt”. Bernal Heights contains the steepest street in the city, Bradford above Tompkins, with a 41% grade, so even just a simple drive around the neighborhood will result in view after view of the neighborhood and beyond.

While the heart of this neighborhood may be in a valley, the eastern borders of Noe Valley make for beautiful views of San Francisco and the East Bay. Much of Noe Valley survived the 1906 earthquake, which means the neighborhood consists primarily of classic Victorian and Edwardian style homes The bay windows that are a primary feature of these styles of architecture provide charming lookout points for homeowners to take in the views.

Another way to take in the views in Noe Valley is to walk the streets. There is a 30% grade on 24th Street between Grand View Avenue and Fountain Street, and you can stop at the quaint boutiques to do some shopping along the way. Church Street, which runs along the edge of Noe Valley, provides views of Dolores Park and also access to the J-Church Muni line, which can be convenient for coming back up the hill.

The neighborhood is also beloved by locals for recreational hotspot Dolores Park. The park features tennis courts, an expansive playground, groves of date trees, grassy picnic space, and one of the best views in the city. On any given weekend you’ll find hundreds of people sunbathing and picnicking on the park’s grassy slopes, checking out the view of San Francisco’s downtown skyline.

Is there anywhere in this neighborhood that doesn’t have a view? Whether you’re riding a bike, taking a stroll, or catching a ride on a cable car, Nob Hill has stunning views of the city and the East Bay everywhere you look. From one street corner you can view Coit Tower, Telegraph Hill, and North Beach, while from another you can see the Bay Bridge and sail boats on the Bay, while still from another you can see the skyscrapers of downtown. Nob Hill viewing hotspots include its peak at Jones Street and Sacramento Street, the intersection of California Street and Powell Street for a view of downtown, and Ina Coolbrith Park, which borders Nob Hill and Russian Hill and features a picturesque view of Alcatraz and San Francisco’s northeast end. A stroll along Taylor Street also provides views of East San Francisco, the Bay Bridge, and Chinatown.

This list wouldn’t be complete without world famous Alamo Square. This quaint residential neighborhood is connected to the Western Addition and is comprised of the four blocks surrounding its namesake park. The neighborhood is home to some of the most beautiful architecture in San Francisco, including the Painted Ladies and the William Westerfeld House, earning the neighborhood the distinction of the Alamo Square Historic District in 1984. The view of the Painted Ladies and San Francisco’s downtown skyline can be found on many a postcard and tourists flock to the park daily for a glimpse of this famous view. Locals also take advantage of the tennis court and playground in Alamo Square Park. There is also a secret shoe garden tucked under a grove of trees!