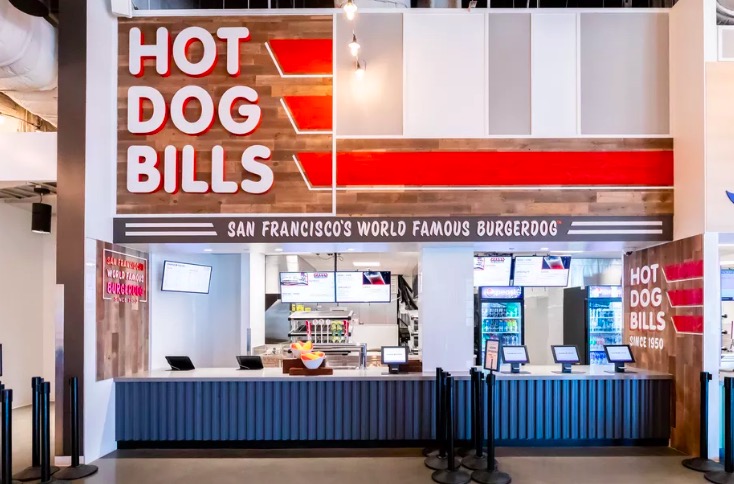 More than 18,000 seats deep, with the largest LED screen in NBA history, the brand new and sparkly Chase Center opens next week — and sports fans and concert goers won’t have to suffer through sad nachos to survive the game. It’s still stadium food though, with thousands of pounds of barbecue and pizza dough, courtesy of food-service corporations Bon Appétit Management Company and Levy Restaurants. But there are also some interesting options from smaller local restaurants, including dim sum, lumpia, and tamales.

Stay tuned for a full guide to all of the food and drink vendors, coming closer to the first concert week. But for now, here are some things to look out for.

There are some throwbacks to try

The Burgerdog from Hot Dog Bill’s was the fan favorite with season ticket holders, who got an early taste last week. Dating back to 1950, exclusively served at the Olympic Club, and beloved by Herb Caen, it’s exactly what it sounds like — ground chuck on hot dog bun, hit with special sauce. The other early front-runner seems to be the lobster roll from Sam’s Chowder House, the Half Moon Bay institution, featuring hunks of seafood cloaked in the right amount of mayo.

There are some decent-looking new-school bites

Stadium goers might be surprised to find dim sum on the menu at Paper Lantern, from the team at Dumpling Time, and serving the same modern dumplings, including the char-siu bao with pork belly and peanut butter and colorful dessert buns. The Sarap Shop will be serving its Filipino-American comfort food over at Food Republic, including the adobo poutine and Impossible lumpia. Plus, the program will be partnering with a couple of nonprofits: La Cocina has a kiosk that will rotate, starting with Alicia’s Tamales, packed with queso or veggies. And Old Skool Cafe will be serving up soul food, including the comforting peanut stew that’s a favorite at the restaurant, along with a creole meatball po’boy created new for the venue.

The “theater boxes,” are a string of 60 connected four-person tables, pictured above, with seats facing the court. It’s all very luxe — a long stretch of red banquets faces a gold-trimmed bar and serving stations, shared by the entire section. Buy a box for four people, and it’s an all-inclusive for food and drinks, including chips and guacamole, pretzel knots with mustards, Nashville-style hot chicken sliders, Sam’s lobster rolls, and more. There will also be carving stations, tossed pastas, salad bars, and a well stocked bar. Chase wasn’t ready to share the price of a four-person box just yet, so stay tuned.

The cantina is an open-air bar, way up in the rafters in a dark corner with long bars and lots of high tops. Up to 148 season ticket holders can purchase assigned seats and hang out here all season. If you’re not a season ticket holder, up to 150 people can also just walk in. It’s $55 for a buffet of food and there’s a separate cash bar. Despite the location’s Mexican sounding name, the menu includes a global mashup of comfort foods like salsa and tortilla chips, a wedge salad with blue cheese and bacon, pork belly bao, baked penne pasta, and chocolate s’mores.

There’s a super luxury option too

The 32 courtside lounges, including front-row seats and a full dining experience, are clearly the most luxurious way to take in the entertainment here. Each block of seats in the stadium is linked via a short tunnel to an underground lair, and comes not just with food and drink, but a wine vault, which you can fill with your own bottles or request to have stocked. A dedicated server (which they are calling a “private butler” in a strange nod to a bygone era) is ready to pass appetizers like cheese, charcuterie, and crostini, and hand out and top up glasses of champagne. It’s an obvious play to local tech execs, including wifi, if anyone wants to call it a satellite office. Chase Center wouldn’t confirm pricing, but annual fees will get into seven figures.