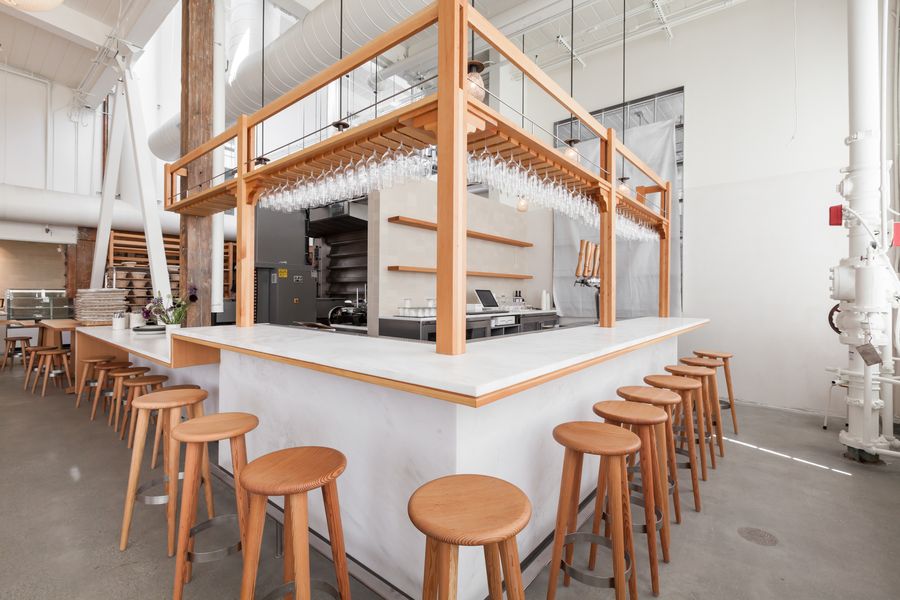 This is so San Francisco,” said chef Sam Goinsalvos, as he slid into the right angled interior of one of the Manufactory’s wooden booths. Goinsalvos was referring to the 5,000-square-foot chunk appropriated from the Heath Ceramics factory by Chad Robertson and Elisabeth Prueitt of Tartine. With that space, the duo created Tartine Manufactory, a multi-faceted maker’s space that also happens to be open to the public.

The behemoth holds an ice cream shop, bakery, restaurant, bar, and coffee shop, all of which are inextricably linked. The space itself is a modern daydream, bedecked in light wood, raw leather meant to be worn in over time, exposed concrete, white paint and the kind of high-windowed heavenly light that a particularly aggressive Instagrammer might kill for.

Goinsalvos, savory chef at the Manufactory, was right. It is so, so San Francisco, a paragon of local passion and entrepreneurship. Whether you go for a loaf of bread, a midday salad, some ice cream, or a pastry, The Manufactory displays local artistry through every interaction. Here’s exactly what to expect.

THE ART OF THE MANUFACTORY

In the years since the original Tartine Bakery opened in 2002, Robertson and Prueitt’s business and skills have grown exponentially, snowballing into a James Beard Award, book deals, and more. Now their hard-earned success has wrought the opportunity to outfit the Manufactory with what head baker Richard Hart calls “the Rolls Royce of everything.” From the oven shipped from Germany to two-armed Hydra mixers that are perfectly suited for making “the perfect panettone,” to Carpigiani soft serve machines that produce “frozen velvet,” the space is outfitted to the teeth.

The result of this ultra-modern paraphernalia is, contrary to what one might assume, a means of returning the focus to artisans, and their craft. Vinny Eng, wine director at The Manufactory, sums it up best: “Chad and Liz joke. They’re like, we’re not interested in opening up another restaurant.The Manufactory, in our mind, is not a restaurant.” 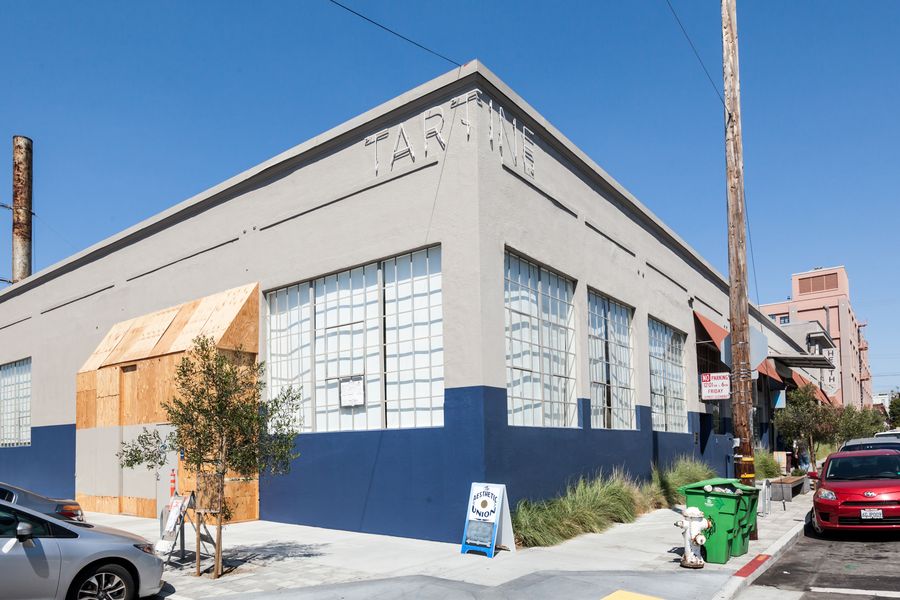 “Part of the experience and part of the joy that comes with supporting an artisan is seeing the artisan at work. What Chad and Liz really wanted to do, and what this space really affords us, is the opportunity to find more ways to humanize the work, more ways for our staff who think and make and touch the food can have more unplanned interactions with people who are literally receiving the products,” says Eng.

As a result, The Manufactory isn’t just a place to go for sustenance, or even to see how bread is made— it’s a place to be. What Prueitt, Robertson, and their dedicated team of highly talented co-conspirators have created is an artist’s commune, a space for creativity, experimentation, and more than anything else, somewhere to get the best damn version of whatever they’ve got. Here’s the breakdown of exactly how one interacts with the Manufactory, starting with the floor plan. 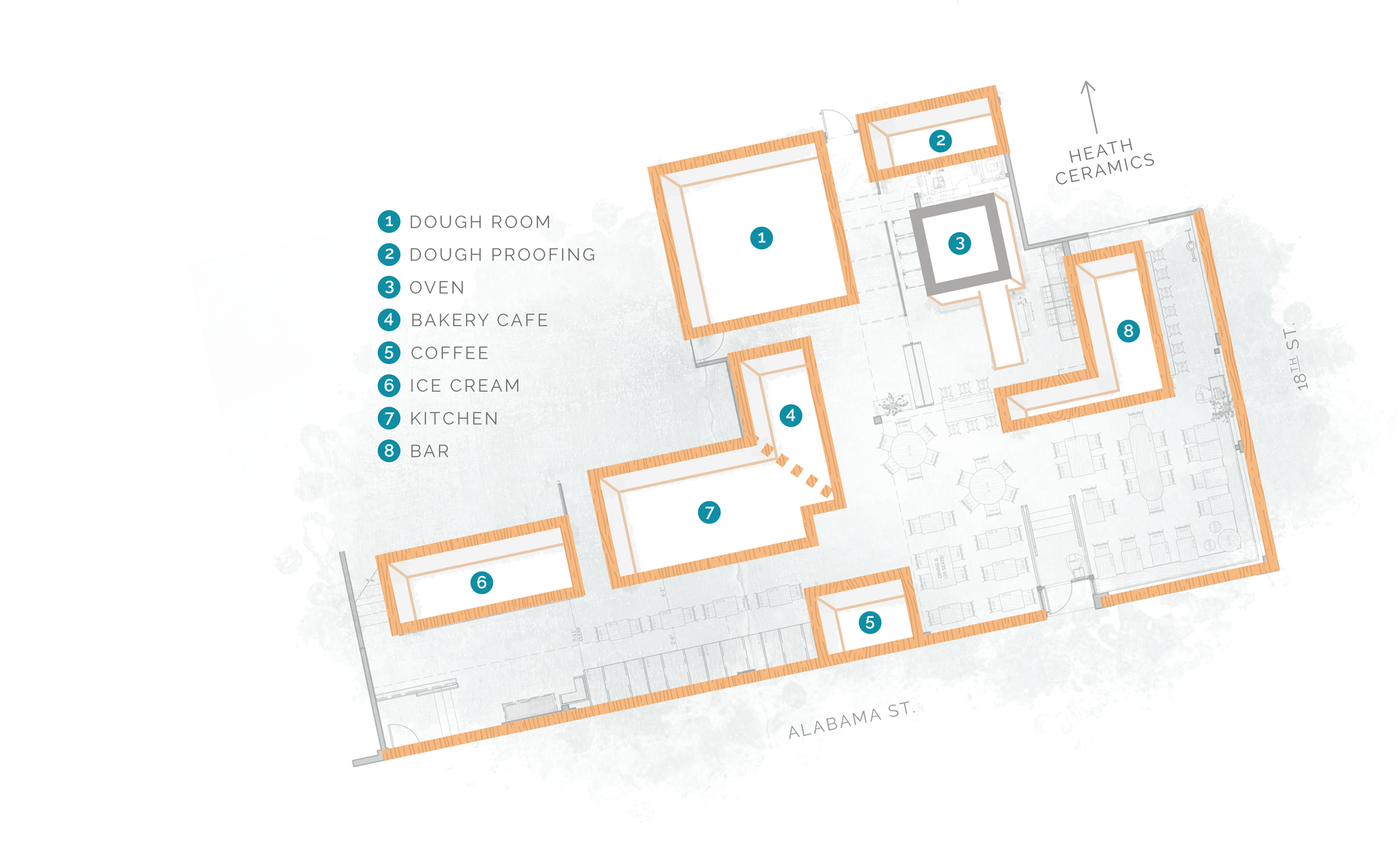 The bakery, naturally, is the center of operations at the Manufactory. Not only is the oven the literal beating heart of the space, but it is the bread that fuels the business. The team of bakers in charge of daily production has made the move from the cramped Tartine Bakery on 18th Street (at Guerrero) into a wonderland of high-tech bakery equipment. Co-founder Chad Robertson has brought new companies and technology into the American market, just for this project. That includes the enormous Heuft oven with two stories of decking and pipes built above it, an entire humidity-controlled room for proofing bread, two enormous double Hydra mixers, and two grain mills to produce flour for the bakery.

Most importantly, the bakery will produce bread two to three times per day, versus once per day at the original location. That means hot, fresh bread all day long. 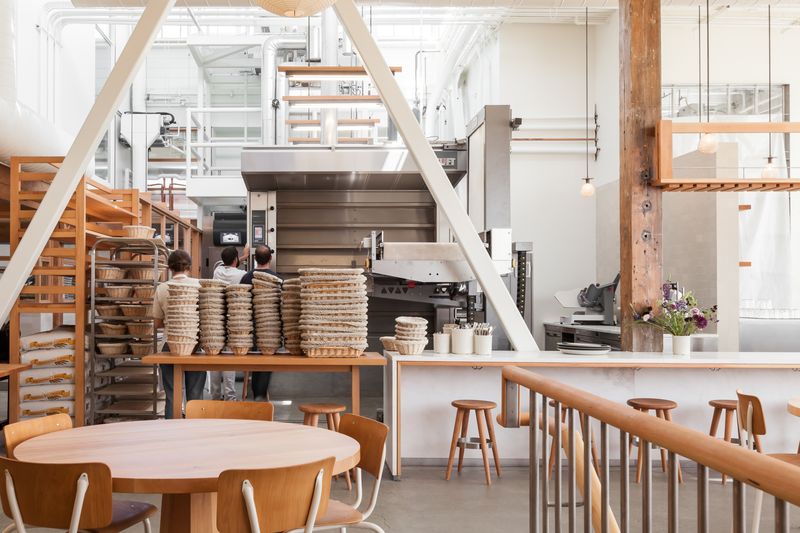 After Lunch, Before Dinner:
A transitional, late afternoon menu will be available with a few special treats, like a hot baguette, accompanied by a cheese and charcuterie.

The bread selection will be largely the same as at Tartine Bakery, though there is more room to try new things in the larger, improved space. Here’s a rundown of the breads that are already on offer at Tartine Bakery:

After Tartine’s short-lived affair with Oakland’s Blue Bottle Coffee, the Manufactory was on the hunt for a new purveyor. Enter Chris Jordan, former CEO of Verve Coffee, and longtime industry expert. It all began with a casual conversation between Robertson and Jordan, an experienced coffee distributor who’d spent years living and working in Africa with coffee farmers. “He asked me what kind of coffee they should have at the Manufactory,” said Jordan. “I said ‘why not roast your own?'”

Thus began Coffee Manufactory, Tartine Bakery’s coffee company that sources and roasts its own beans. Jordan’s approach is focused on the coffee’s producers, as much as it is on end result, a style that aligns directly with Robertson and Prueitt’s ethos.

At opening, the kiosk will offer batch coffee, espresso drinks, one or two of the most popular pastries, and tea. The beans, which are roasted in Berkeley, will be available in bags to take home.

At the kiosk, customers will be faced with more simplified options than they typically encounter at a coffee shop.

“The way that it is laid out is that really we are dealing with two ingredients: coffee and milk. The cappuccino, latte, flat white, macchiato, cortado, Gibraltar, are all just different combinations of those two ingredients. More than anything else we are just developing the most simplified way to deliver that,” says director of retail coffee, Devin Chapman, who also emphasized that accommodating customer requests is a large part of their service directive. “If someone asks for a cappuccino, we’ll make them a cappuccino.”

Rare Tea Company, a London-based tea purveyor who works with restaurants like Noma and Momofuku, will provide the leaves. Green, black, herbal, and ice teas will be available, sourced directly from farmers.

The restaurant will serve breakfast, lunch, and dinner, seven days a week. However, breakfast and lunch will be counter service, with runners flitting about the dining room taking drink orders, and delivering food. Here’s how to navigate a meal at this bustling eatery.

Dinner service will not be offered at opening; expect it to launch in the next month. Hours: TBD

Breakfast and Lunch:
Diners place an order at the bakery and can grab a seat at one of the tables or booths. Diners can also grab something pre-prepared from the case, like a salad or slice of pizza.

Midday:
The bar will open, with seating for diners available. Beer, wine, low-proof cocktails, and non-alcoholic shrubs, juices, and housemade sodas will be available.

Dinner:
The banquettes, booths, and tables will become full-service, with servers taking orders and delivering food. Reservations will be available for parties of six and up.

“It’s bread-centric. Food that goes great with bread,” said Goinsalvos, who joined the team from NYC’s Il Buco Alimentari. “California cuisine, with some Southern sensibilities, and New York swagger.” Expect sandwiches, salads, porchetta, and Roman-style pizzas with an array of toppings. Dinner will include large format dishes, served on Heath platters, and delivereda directly from the fire to the table in earthy flameware designed by ceramicist Travis McFlynn

Wine director Vinny Eng, along with beverage manager Ashley Miller, focuses primarily on the wine and beer lists; meanwhile, Prueitt and her pastry team are bringing their A-game to to the menu of low-octane cocktails (the liquor license doesn’t allow for distilled spirits). Expect shrubs, fermented beverages, savory and sweet syrups, and cocktails made with sherry, aperitifs, and other fortified wines.

According to Eng, the wine list will be composed of at least half wineries driven by women. That designation includes a diverse array of female viticulturists, winemakers, owners, farmers, and more. Natural wines, and Italian varietals will also be a focus, though Eng emphasizes that flavor, above all, is the most important thing.

Elisabeth Prueitt’s long-time dream of opening an ice cream shop is realized in the petite Tartine Cookies and Cream. It occupies a corner of the Manufactory with immediate street access, so guests can drop in for a sweet treat without navigating the rest of the scene. And, like the rest of the Manufactory, everything here is top notch, from the Carpigiani soft serve machines that create “frozen velvet” to the ice cream base made with water buffalo milk delivered daily from Double 8 Dairy to the Heath Ceramics ice cream bowls painted a custom “Tartine Teal” glaze. Cakes and pints to-go will be available in a freezer case, for convenience.

Tartine Cookies and Cream is not yet open; expect a debut by mid-September. When it opens, hours will range from 11 a.m.- 8 p.m.

It will be a deep bench of frozen treats here, including (but not limited to):

Tartine Manufactory is now open. To start, hours at the coffee shop, and cafe will be 7 a.m.- 5 p.m., Wednesday- Monday; Tartine Cookies and Cream, and dinner service, will be added in the coming weeks. 595 Alabama St. (at 18th Street)