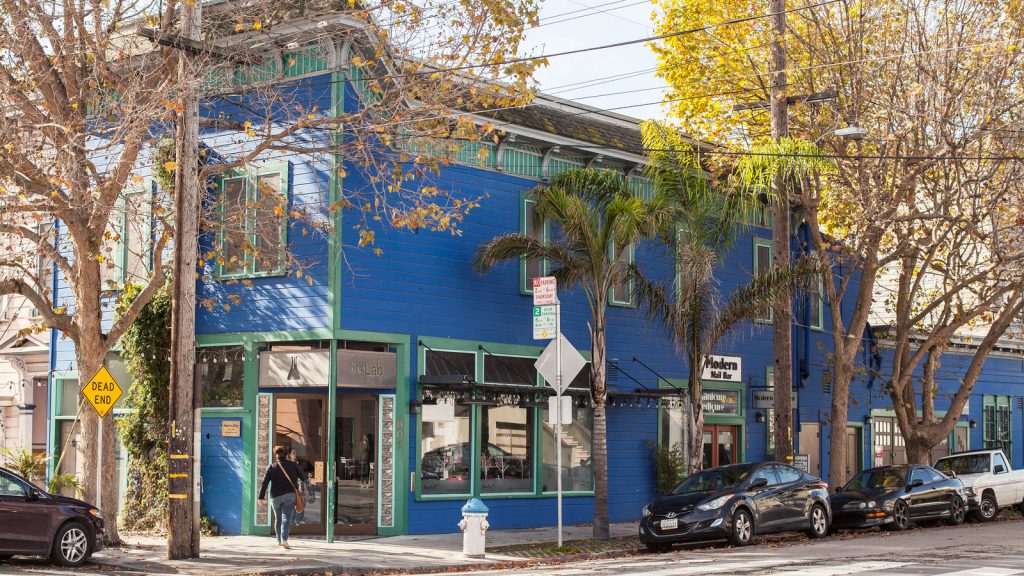 At the end of the day, when Dennis Herrera is done with projects like suing the developers of San Francisco’s notoriously sinking Millennium Tower, he goes home to his solidly built house near the bay. Mr. Herrera, 54, has been San Francisco’s city attorney since 2001. He has lived in Dogpatch, a waterfront enclave on the eastern side of the city, even longer.

As Mr. Herrera recently recounted, when he began house hunting in 1993, Dogpatch didn’t always lay claim to that name. His eye fell on a newspaper listing for an 1884 Italianate Victorian that was said to be in Potrero Hill. Intrigued by the surprisingly reasonable price of $250,000, he discovered that the property was actually in an industrial area directly east of its putative neighborhood, on Tennessee Street near a Hell’s Angels clubhouse.

“It was really gritty,” Mr. Herrera said. But still, he was charmed. He paid $235,000 for the 2,900-square-foot building. As new construction began to fill surrounding vacant lots, and the ample street parking disappeared, he added a two-car garage. Today, he lives in the house with his wife, Anne, and their 15-year-old son, Declan. The Hell’s Angels remain neighbors.

In the last five years or so, Dogpatch has lost many of its rough edges and become a hub for creative industries, from brewing to branding. David Fletcher, a landscape architect, helped create several new green spaces in the neighborhood, including its first playground, and works in the American Industrial Center, a former cannery that stretches along Third Street, from 20th to 23rd Streets. He described the complex as “an aircraft carrier of creativity.” Fellow tenants include a chocolate maker, a roboticist, a bookbinder, a sex-toy inventor, a messenger-bag manufacturer and an organizer of cooking parties. “It’s pretty amazing one-stop shopping,” he said. 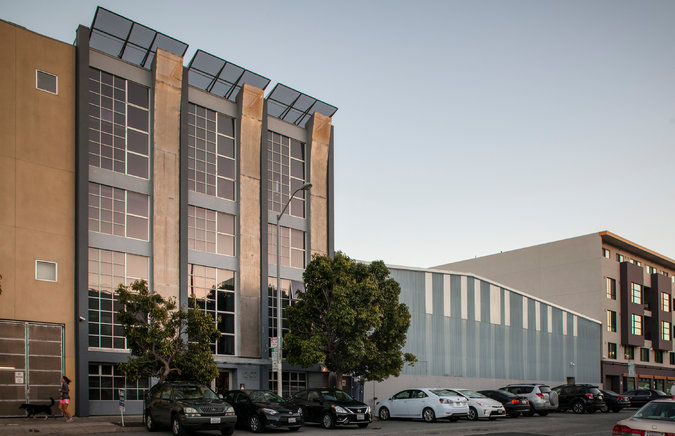 The arts also bloom in Dogpatch. The Minnesota Street Project, a three-building complex between 23rd and 24th Streets that includes 35,000 square feet of gallery space and 22,000 square feet of subsidized studio space, opened in spring as a refuge for artists who have been priced out of gentrifying neighborhoods like the Tenderloin. Three years ago, the Museum of Craft and Design moved to its current location in the American Industrial Center from the Union Square area. Next month, Untitled, an international art fair, will hold its first San Francisco event at Pier 70, a 65-acre former ironworks and shipbuilding site.

However, as Veronica Nye, the bar manager of the Dogpatch Saloon, at 2496 Third Street, pointed out, most of the neighborhood’s growth has been in housing, not services. “It would be nice if it were the other way around,” she said. Dogpatch still lacks a bank branch and a grocery store. Many residents do their main shopping in nearby Potrero Hill and pick up things like hummus and cheese at Reno’s Liquor Store, at 728 22nd Street.

Among other concerns is the impact of a Golden State Warriors basketball arena planned for Mission Bay to the north. While some appreciate the promise of new business, others worry about rowdy fans and traffic. Opinion is also divided about the city’s proposal to locate a homeless navigation center — a facility that offers shelter and services — in Dogpatch. The community voted to support a temporary center on 25th Street at San Francisco Bay.

As generously defined by Bruce Kin Huie, the president of the Dogpatch Neighborhood Association, the district is bounded by Mariposa Street to the north, Cesar Chavez Street to the south, the waterfront to the east and Pennsylvania Avenue and Indiana Street to the west.

Housing includes Victorian homes and workers’ cottages that survived the 1906 earthquake, but these rarely come on the market. Buyers will find more inventory in repurposed midcentury factories and new condominium and rental buildings, which are proliferating at an explosive rate. Mr. Huie confirmed that the neighborhood’s stock of almost 2,000 residential units is expected to double by the end of 2017, with the addition of new condo and apartment buildings. A proposed future development at Pier 70 will add up to 2,150 rental apartments, 30 percent of which will be priced below market rate.

According to data from the San Francisco Association of Realtors, the median sales price of homes in Dogpatch as of October was $1.2 million, a 7 percent decrease over a 12-month period.

Patrick Carlisle, the chief market analyst at Paragon Real Estate Group, in San Francisco, said the number and prices of properties available fluctuated with the ebb and flow of listings. As of Dec. 1, for example, only a handful of neighborhood properties, represented by various brokers, were advertised on his company’s website. These included a one-bedroom, one-and-a-half-bathroom condo at 875 Indiana Street, listed at $850,000, and a two-bedroom, two-bath condo at 1207 Indiana Street, listed at $1,199,000.

Even by San Francisco standards, Dogpatch is expensive. (In March, Zumper, a rental blog, reported that the area’s median rental price of $3,810 a month was the third highest in the city.) High land prices and city regulations drive up the costs of new construction, leading developers of buildings like those filling the neighborhood to aim for a luxury market. But that market is finite, Mr. Carlisle pointed out. Given both the cooling of the high-tech boom, whose young workers have gravitated to Dogpatch, and the surge of new housing in the area, he said there may be further price declines.

Dogpatch is a tightly knit community of passionate citizens. While residents are concerned about the sudden spike in density, they take refuge in organizations like the Dogpatch Neighborhood Association, which has a design and development review committee that seeks to ensure that new developments don’t get too big, bland and homogeneous. Dogpatch, along with a section of Potrero Hill, also recently established the first Green Benefit District in California, a community-supported initiative to improve and expand public green space.

Within Dogpatch, the private La Scuola international school has its preschool campus at 728 20th Street and enrolls about 130 students. The program offers full immersion in the Italian language. The school’s campus for kindergarten through eighth grade is at 735 Fell Street, in the Hayes Valley neighborhood. 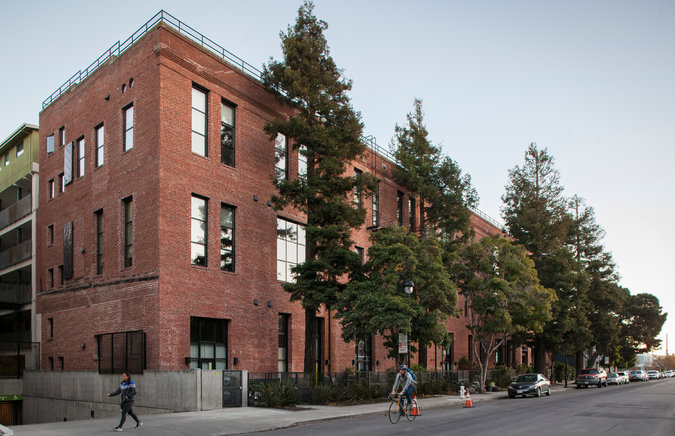 Other nearby options include Daniel Webster Elementary School, a newly renovated public school at 465 Missouri Street on Potrero Hill, with about 290 students in kindergarten through fifth grade. On 2014-15 California state tests, the most recent year for which figures are available, an average 29 percent of students met standards in English, compared with 44 percent statewide; an average 25 percent met standards in math, compared with 33 percent statewide.

The private Live Oak School, at 1555 Mariposa Street, on Potrero Hill, has about 315 students, kindergarten through eighth grade.

Dogpatch is convenient to two stops on the T-Line Muni Metro light rail system running on Third Street, one at 20th Street and another at 23rd Street, with service to downtown. (The trip to Powell Street station takes about half an hour.) It is also served by the 22nd Street Caltrain commuter rail station for travel to Silicon Valley and other points south.

The origin of the name Dogpatch is uncertain, but Christopher VerPlanck, an architectural historian in San Francisco, believes that it dates to the Depression, when the neighborhood, which was then known as Lower Potrero, became populated by people who had migrated to San Francisco from hard-hit parts of the United States to work in the shipyards. “This was during the time that Li’l Abner was a popular comic strip,” he said, “and consequently, in many Southern towns, the area where the poor white people lived was called ‘Dogpatch,’ ” Mr. VerPlanck wrote in an email. “I think many San Franciscans saw the Lower Potrero area as a working-class white Southern enclave and called it Dogpatch.” Others theorize that the area received its name from wild dogs that roamed the neighborhood.