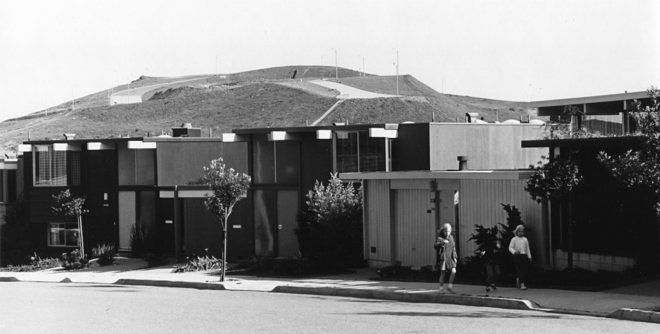 Over the course of his career, famed midcentury developer Joseph Eichler built roughly 11,000 homes. By marrying the postwar vogue for tract houses with architect-designed plans, Eichler offered middle-class homebuyers the opportunity to own a well-made, still relatively low-cost home that felt, in a word, designed. With glass-walled rooms oriented around courtyards and atriums, gently sloping wood-plank ceilings, and radiant heating, Eichlers were compact little testaments to fresh air, modern conveniences, and accessible design (though, as a recent NPR story noted, to contemporaries accustomed to blander stuff, they looked “kind of weird.”) Devised by the likes of Anshen and Allen and Claude Oakland in the Bay Area and Jones & Emmons in LA, among others, most of Eichler’s models were single-story homes in suburbs like Walnut Creek, Concord, and San Rafael. But in 1950 the arrival of San Francisco’s Redevelopment Agency laid the groundwork for a suburban-style experiment on a San Francisco hilltop. 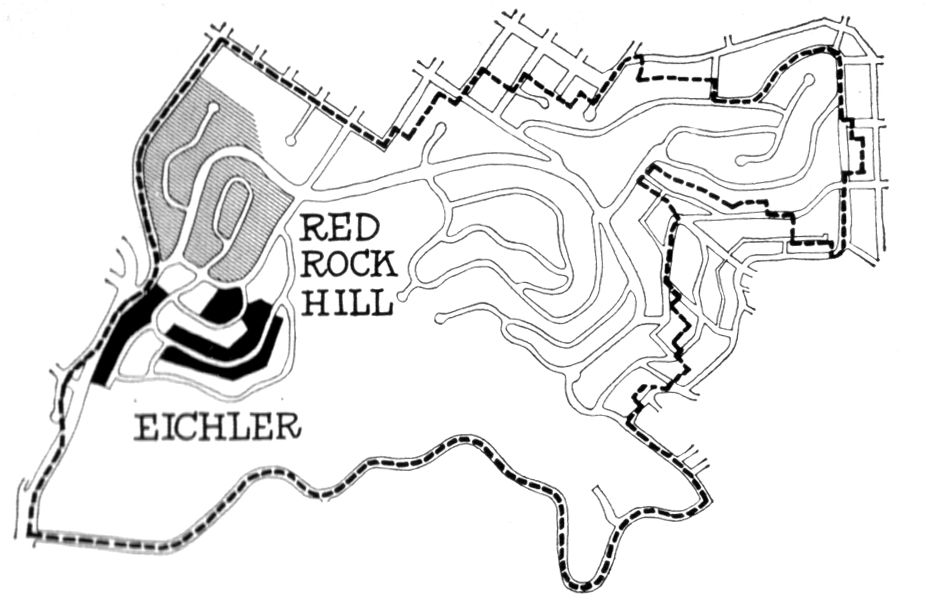 In the 1950s, the part of town now known as Diamond Heights felt more like a rural outpost than a San Francisco neighborhood. Located on a rugged crest above Glen Canyon—defined by Red Rock Hill, Gold Mine Hill, and Fairmount Hill—the land was home to 158 houses and just 374 people. Up through the 1930s, dairy cows grazed above a quarry, according to John King. The steep topography had discouraged development: One-third of the streets had slopes greater that 20 percent, and another one-third had slopes topping 30 percent. Until the city began filling out at its southern and western edges, there had been no need to bother taming an isolated hilltop.

The postwar years were an idealistic time for urban planners, who grew enamored of the idea that social ills could be designed away with good planning. The Redevelopment Agency, which had begun plotting its controversial (and now thoroughly disavowed) urban renewal campaign to raze the Fillmore, began eyeing Red Rock, Gold Mine, and Fairmount hills as a site for middle-class housing. According to architectural historian Richard Brandi—whose thorough account in the Journal of Planning History this story owes a debt to—city planners knew displaced Western Addition residents wouldn’t be able to afford middle-income homes, but they imagined that development on the trio of hills above Glen Canyon would ease overall pressure on the city’s housing supply.

Architect Vernon DeMars drafted the plan for a middle-class community combining high-rises and lower-slung townhouses and homes, which the Redevelopment Agency dubbed Diamond Heights after Diamond Street, which ascends from Glen Park. Even though the plan was to densify the area—at the time, Planning actually supported the idea of building towers on top of hills!—DeMars ensured that it remained a hamlet by limiting access to the neighborhood to one major thoroughfare, Diamond Heights Boulevard. Side streets split off, winding around the topography and avoiding the kinds of clear sync-ups that would serve through traffic. Though Diamond Heights’ coordinates were inside San Francisco, its confounding anti-street grid turned it into the urban equivalent of a tract development. The curvilinear plan stepping up the hills also ensured that each home would have a view over its lower neighbors’ rooflines. 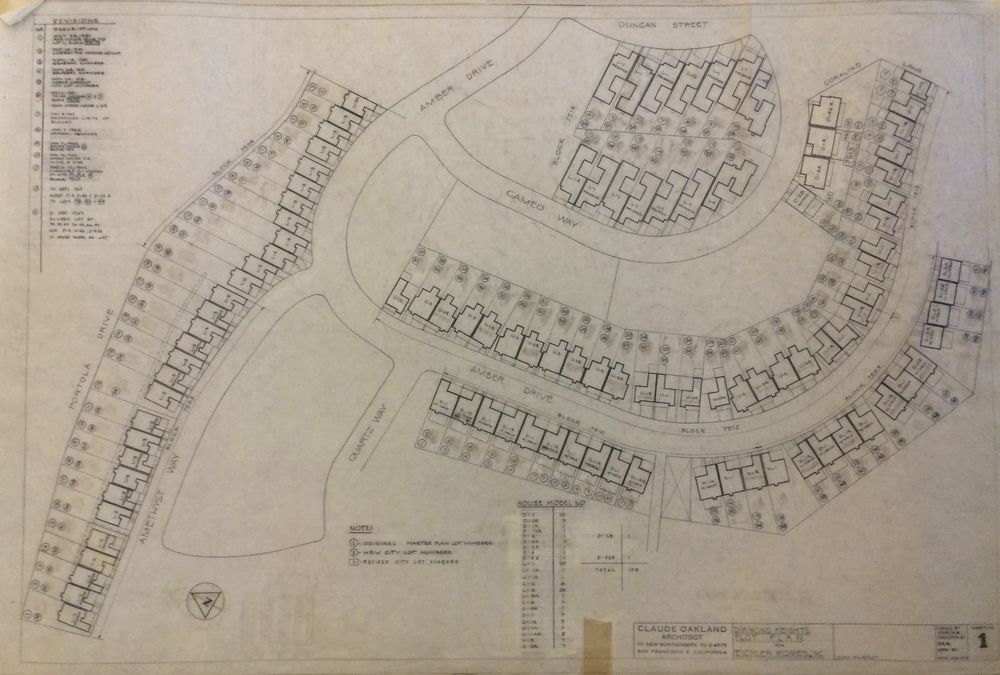 The plan provided for schools, a firehouse, a commercial strip, and a community center on the saddle between Red Rock and Gold Mine hills. The city owned part of the land, but to acquire the rest, theRedevelopment Agency declared 325 acres blighted—an unusual step for a largely undeveloped area, as Brandi notes. That passed muster thanks to a technicality in the California Community Redevelopment Act, which considered a scarcity of paved roads and graded streets a form of blight.

DeMars wrapped up his plan in 1952, but building didn’t begin in earnest until the 60s. Neighborhood opposition mounted, and the public objected, among other things, to the destruction of a rural atmosphere. NIMBY hyperbole was alive and well in the 50s. Brandi quotes one speaker at a 1952 public hearing, who equated the Redevelopment Agency with forces no less nefarious than instigators of atomic warfare:

Now, we have lived with the strain around here for the last three or four years about the atom bomb but I hope to God we got no bomb on us from the Planning Commission.

Once the Redevelopment Agency established its legal standing, regrading and infrastructure work began in 1960. Crews moved two million cubic yards of earth to the dip between Red Rock and Gold Mine hills, smoothing the soil into a newly flat area for the community center and parking lot. Mid-rises between seven and twelve stories were to go up on Red Rock Hill, flanked by lower-slung apartments. Because of funding troubles and a change in developers, Diamond Heights’ mid-rises were ultimately never built. (Fun fact: After Eichler’s Summit tower rose on Jones and Green streets, to the delight of residents and the chagrin of neighbors, the Planning Department rethought its policy toward towers on hills, as Paul Adamson notes in his Eichler history, Modernism Rebuilds the American Dream.) 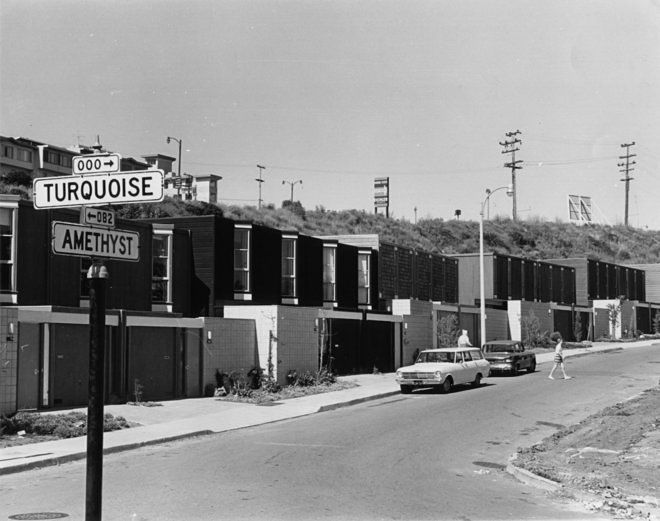 Along with developers the Ring Brothers and Galli Construction, Eichler Homes was awarded a tract to develop. The company’s 100 homes are concentrated on Amethyst Way, Amber Drive, and Cameo Way. In a departure from Eichler’s single-story suburban houses, as Adamson notes, architect Claude Oakland came up with a hybrid model that would suit the neighborhood’s hillside plots. They featured small entry courtyards that riffed on the atriums of the suburban Eichlers, and consisted of three levels accessed via a central stair, a format recalling some of the developer’s townhouses. The plain facades were taken up by garages on the ground level, while upper floors had narrow vertical windows. Prices ranged from $34,950 to $46,500, in 1962 dollars. (Roughly speaking, that would work out to somewhere between $273,000 and $363,000 today, just a third of what even the non-mint Eichlers go for these days, according to Eichler for Sale.) 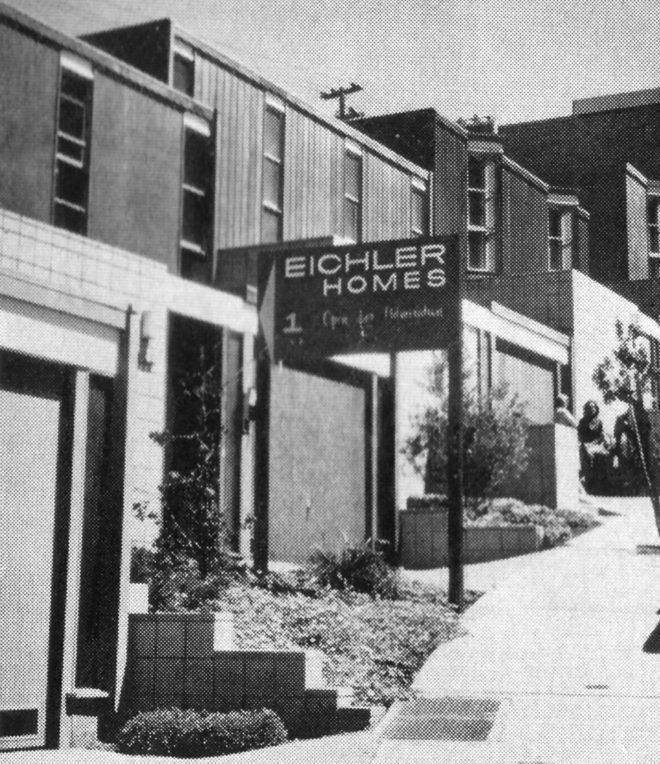 In the 1950s and 60s, Eichler marketing was ubiquitous, with appeals like “Enter the wonderful world” and “Choose Your Plan … Choose Your Exterior. NO DOWN PAYMENT NEEDED!” As one original Diamond Heights Eichler buyer told the San Francisco Examiner in 1997, the developer also had a few optic tricks in his arsenal. “He would paint two adjoining homes the same color to give the illusion of one huge house to prospective buyers,” resident Damon Lum told the Examiner. “And for their model home, Eichler decorated with small Danish furniture that made the rooms look a lot roomier than they really were.” 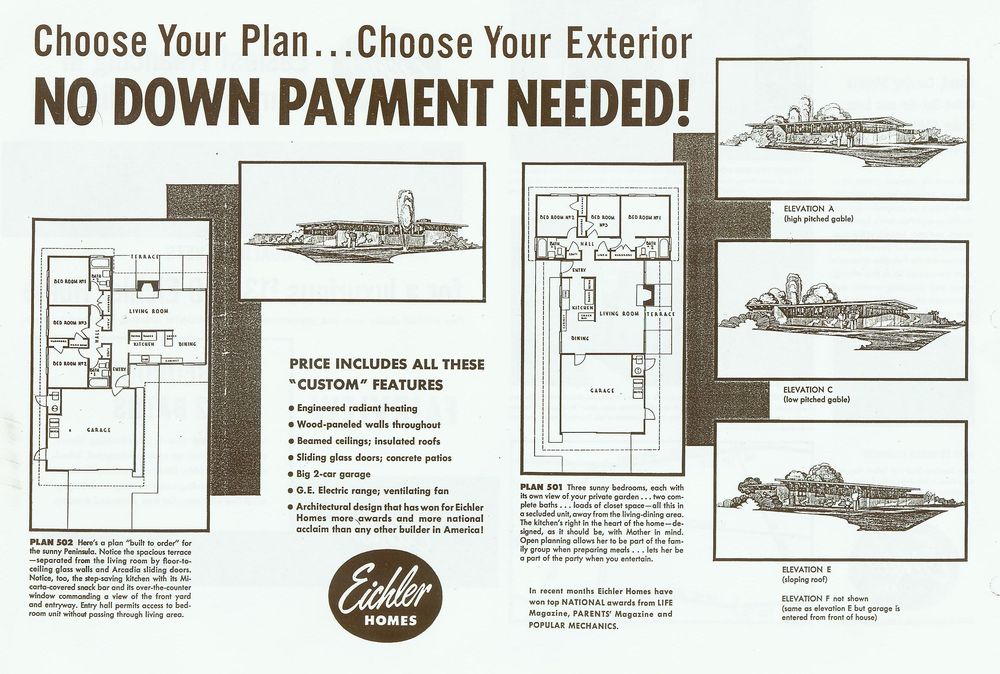 But for Eichler Homes, which had been churning out subdivisions for a good 15 years, the company’s entry into the San Francisco market spelled the beginning of the end. Between 1961 and 1963, the firm’s expenses rose almost 25 percent, according to Adamson, who observes that Eichler’s notion that the middle class would return to the city was ahead of its time.

It wasn’t the single-family homes that did in the company, however, but the apartment towers. As many a contemporary developer knows, getting an experimental, forward-thinking building like the Summit off the ground (or even, let’s face it, a boring, predictable one) is a cash-intensive process, given that no unit can be rented out or sold until the entire building is completed. Eichler, meanwhile, was accustomed to selling off homes one by one as they were finished, helping to fund later phases of development. The Summit suffered cost overruns of $2 million before it was completed in 1965. In 1966, Eichler Homes went through a bankruptcy proceeding related to more cost overruns at its Geneva Towers project in Visitacion Valley. Shortly thereafter, Eichler and his son Ned Eichler sold a controlling interest in the company to two investors. But the firm never made it out of debt and ultimately collapsed.

But half a century later, demand for the rare urban Eichler runs high—to the point that even half-destroyed specimens command top dollar—and turnover is low in a slice of the city that still feels more like a 60s-70s enclave than a part of the city. 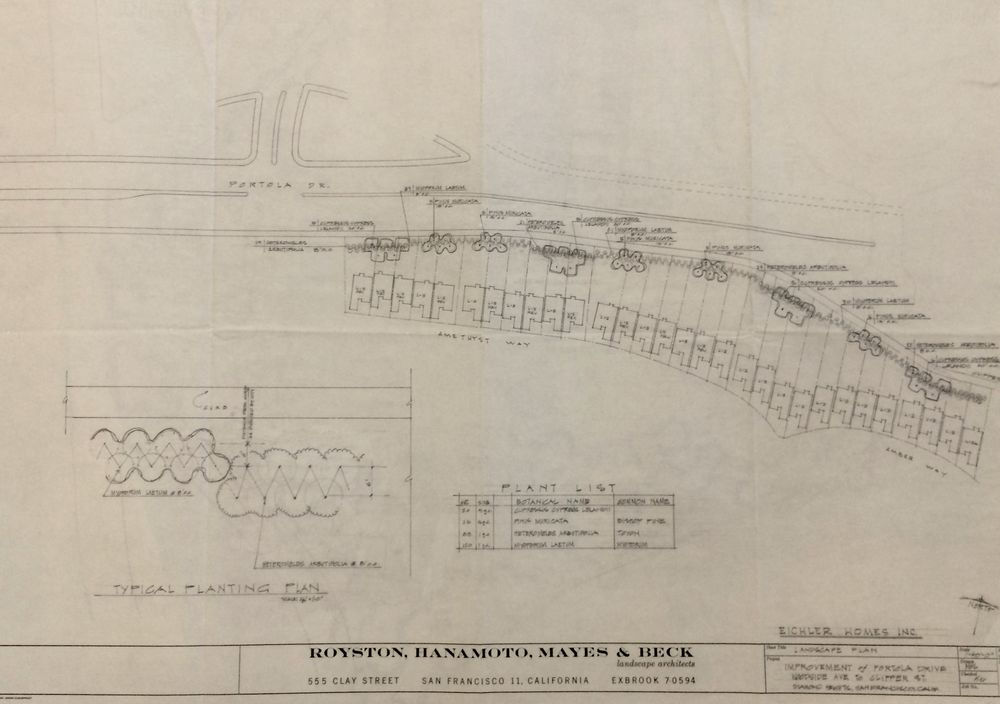