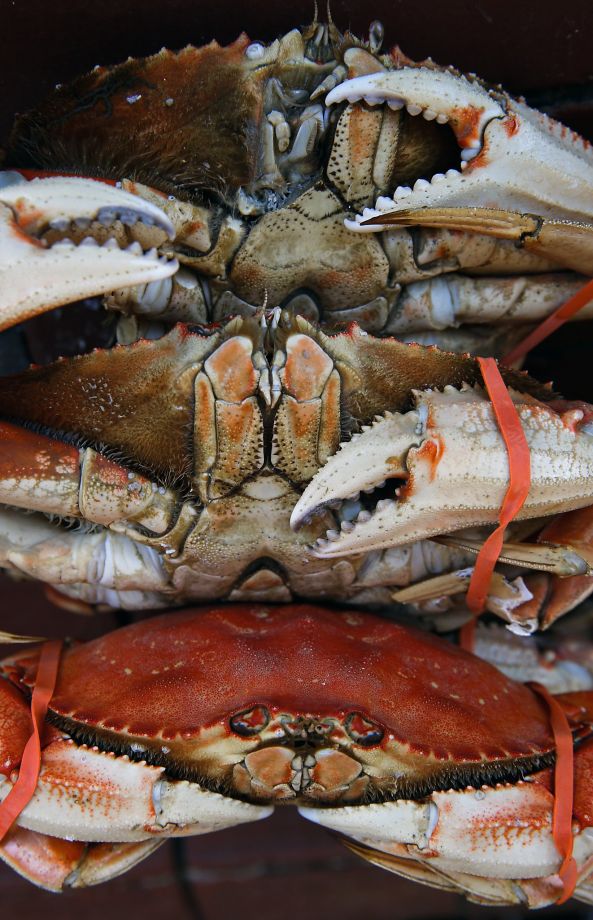 The decision by the California Department of Public Health allows only recreational crab fishing to resume as yet. It will be at least a week before commercial crab boats can head out to sea — and then only if the state Department of Fish and Wildlife approves the plan.

The health advisory that has delayed the start of the crab season since November was lifted for Dungeness crabs caught south of Point Reyes. But even those crabs may not be entirely pristine.

Diners should remove the guts before cooking the crabs, the health agency said. And the crabs should be boiled or steamed — and their cooking water discarded — instead of fried or broiled.

The fishing ban continues for rock crabs, which remain unsafe to eat.

But health officials said that domoic acid, the potentially deadly neurotoxin that had been present in Dungeness crabs, has “declined to low or undetectable levels” in catches from areas including San Francisco, Half Moon Bay and Monterey.

“Recent testing has indicated that the Dungeness crab caught in those areas no longer poses a significant risk of domoic acid,” said Patrick Kennelly, food safety section chief for the state Department of Public Health.

“It’s encouraging, very encouraging,” said Dante Serafini, owner of the Old Clam House restaurant in San Francisco, who has served customers crab from Oregon and Washington all season. The prospect of restoring local crabs to the table has Serafini smacking his lips.

“The thing is, the crabs are very plump because they’ve remained in the water,” he said. “So we’ll get the best crabs we’ve had in years.”

Commercial ban may be lifted

Conversations between state officials and crabbers will begin next week in preparation for the possible lifting of the commercial crab fishing ban, said Jordan Traverso, spokeswoman for the state Department of Fish and Wildlife.

Commercial crabbers had asked the state to give them at least a week’s warning so they could prepare, she said. And some crabbers oppose opening the season at all.

“Some fish for other things as well, and have chalked this (crab) season up to a loss,” Traverso said. “But others want the season to open as soon as possible. Our job is to get them to come to some agreement.”

On Tuesday, Gov. Jerry Brown asked the Obama administration to declare the state’s crab fishery a federal disaster, which could free up federal aid for those who make their living at sea. Brown said the industry suffered a $49 million loss because of the toxic algae bloom that tainted the crab.

If California’s bid for disaster relief is approved, crabbers would qualify for aid even if the commercial season opens, Traverso said.

Dave Bitts is a fisherman who has no desire to start crab fishing at this late date, and is already preparing for the May salmon season.

“For me personally, we are past the time when I normally want to have all my gear on the dock and am done crab fishing,” said Bitts, president of the Pacific Coast Federation of Fishermen’s Associations. “But there will be plenty of guys who still want to go crab fishing — so you should be able to find crab (at the grocer). It may not be as widespread — and it may be more expensive than you’d like.”

Mason and Lis McKinley of Oakland love crab so much that they’ve hosted a party in its honor for more than 15 years. A tradition is for guests to tell each other, “I love the crab party,” said Mason McKinley, a teacher.

They didn’t let the lack of crab stop the party this year, McKinley said. The guests just told each other, “I love the un-crab party.”

So if there’s anyone who should be happy about Thursday’s news, it should be crab lovers like the McKinleys.

“I don’t know that I’d trust the crab this year,” McKinley said, considering the crab guts warning. “It reminds me of eating blowfish. I’ve heard if you cook blowfish wrong it could kill you. I just don’t want to take the risk.”