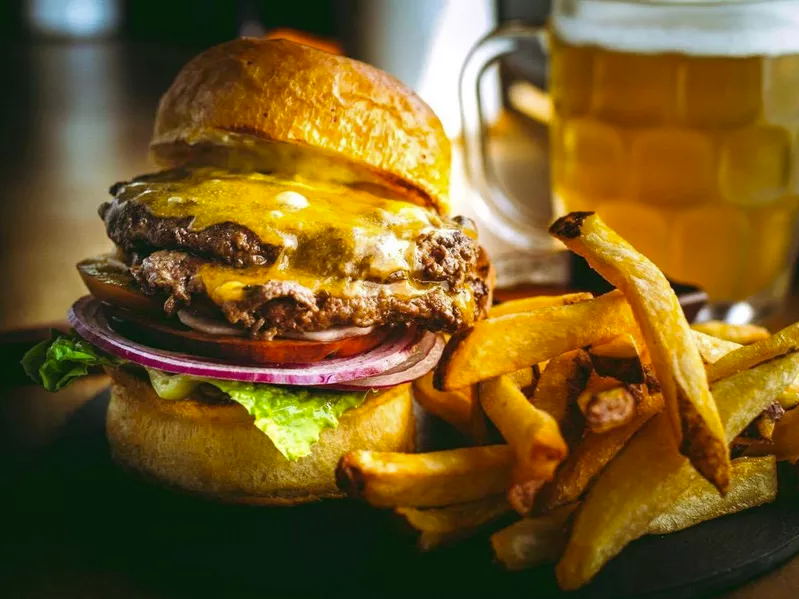 There’s nearly no American food as beloved as the hamburger. It’s a great American pastime, a symbol of summer barbecues, and all-around icon of happiness and freedom. San Francisco loves the burger just as much as the next city, and chefs around town have spent considerable time on making the best version possible, resulting in a constellation of essential burgers that reflect and demonstrate the very fabric of our fair city.

From the $20 gourmet burger experiences adorned with fancy sauces, to the much-loved, hole-in-the-wall joint patties no one can resist, SF has got it all. No one burger reigns supreme; rather, they all complement each other in making SF an excellent burger-eating town. Herein lies the essential list of San Francisco’s burgers, listed alphabetically.

As would be expected from a meat-obsessed concept, 4505’s burger puts a heavy emphasis on the cow. It uses a quarter-pound grass fed Sun Fed Ranch patty from Sacramento Valley up to the Oregon border, and it comes on a griddled sesame and scallion bun with iceberg lettuce, sliced red onion, Gruyere cheese, and “secret sauce.” It’s always served medium rare, and it hasn’t changed since the day it opened. This compact quarter pound masterpiece has a cult following due to the delightfully unexpected use of Pimento, as well as the way the cheese is melted onto the burger so perfectly that meat and cheese fuse as one. The extra fluffy bun is another success factor — though this burger has some real height, its consistency is still dense and juicy. The Black Sands burger is pure Americana, with two smashed patties, special sauce that involves soy sauce and garlic aioli, pickles, and lots of oozy American cheese on a squishy bun. The meat is especially juicy, but with a nice crunchy char from the smash Causwells award-winning burger is a true phenomenon in the Marina. The sizeable patty has been likened to a souped-up In-N-Out Double Double, with its thin char-grilled patties and perfectly melted cheese. The house sauce and crispy onions are a particularly nice finish on this very messy endeavor. Gott’s Roadside burger is your typical all-American-style patty, but with a little more heft. These 1/3-pound patties are made from a proprietary blend of Niman Ranch beef, and the extra-soft egg buns are sourced from Panorama Bakery. As for the secret sauce … it’s, well, a secret. The “Hux Deluxe,” dreamed up by chef Manfred Wrembel for Huxley, has a lot going on, but it all works. The four ounce dry-aged patty uses ground chuck and is served with American cheese, frisee lettuce, and MSG aioli. A “bacon wafer” adds extra flavor, as well as the housemade onion bun, which subs a pickle brine instead of water, adding just the right amount of saltiness. The Marlowe burger is so popular that for a hot second it inspired its own pop-up restaurant. Chef Jennifer Puccio created a burger masterpiece using a six-ounce ground beef and ground lamb mix, chargrilled and topped with cheddar cheese, caramelized onions, horseradish aioli, bacon, and shredded lettuce, all on an Acme bun. The lamb adds a subtle earthiness, while the horseradish brings it all alive. When you think about Namu Gaji, a burger may not first come to mind, but the Lee brothers’ version is an indulgent, addictive addition to this list, starting with its two thin Marin Sun Farms meat patties cooked on binchotan charcoal, which adds a true wood-grilled flavor. Next up is bacon jam, made with Benton’s bacon and Four Barrel coffee grinds, with heirloom tomatoes and pickled daikon from the Namu farm, all on a housemade bun.

There is no better late-night burger than the one at Nopa — the restaurant serves 29,000 every single year, which is certainly proof. This one is wood-grilled and comes with pickled onions, little gem lettuce, and cheddar cheese if you so choose. It’s also the least expensive item on the menu, making it the perfect barstool meal, since you’re probably not getting a table. Of all the burgers on the list, Sam’s is likely to be held closest to San Franciscans’ hearts. Though not necessarily the most awe-inspiring option, the Sam’s burger is essential to San Francisco, and is as rich in history as it is in taste. Sam’s first opened its doors in 1966 and has been serving up comfort food — daily until 3 a.m., which is the key part — ever since. It’s a chuck blend from Quality Meat Company with cheese, lettuce, and tomato on a sesame bun. Go after a North Beach night out, and you’ll soon be a Sam’s disciple, too. Spruce may be on the fancier side, but its burger is accessible to all. The patty is made with a proprietary blend of brisket, short rib, and sirloin from Bassian Farms, and served on a housemade English muffin bun. Spruce touches can be seen throughout, like in the turmeric-pickled zucchini, the pickled red onion, beefsteak tomato, and thrice cooked French fries that come on the side. If you really want to take the experience to the next level, add seared foie gras, truffles, or some stinky epoisses. Adriano Paganini himself labored over the Super Duper burger, which since 2009 has proliferated to ten locations in the Bay Area. The fast food joint puts two patties on its signature burger, using humanely-raised, vegetarian-fed beef from local, family-owned ranches, with an 80-20 protein to fat blend. There’s a secret sauce, of course, tomatoes, lettuce, and buns are delivered daily from a local supplier. You can add cheese and bacon at your own discretion. Wesburger started as a pop-up, eventually garnering such a fan base that it went brick-and-mortar this year. Now, the Mission location is making its signature six-ounce brisket patties on a nightly basis, and toppings change every day. The most classic version is the okie burger, which is cooked on a bed of onions and comes with mustard, pickles, and American cheese. Zuni may have risen to fame because of its outrageously good roast chicken, but the restaurant’s burger is a marvel in its own right. The meat is salted the night before and then ground day of, giving it a juicier finish. The Zuni touch can be felt in every other aspect of the burger, too, with its rosemary focaccia bun, housemade pickles, pickled onions, and garlic aioli.