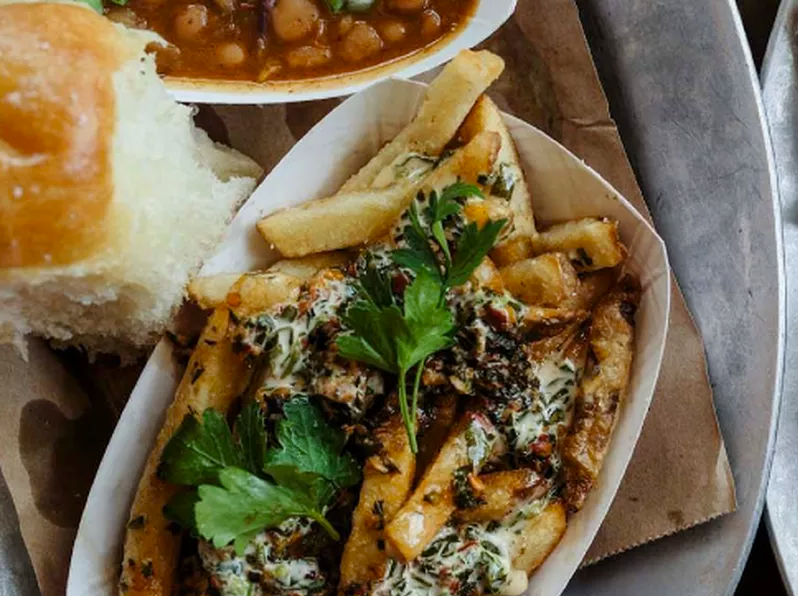 Meat will always be the star when it comes barbecue, but the accompaniments can be just as important as the main event. With no set style of ‘cue in the Bay Area, restaurants have free reign to create some unconventional sides that are near worthy of a trip in and of themselves. Check out  this list of 8 places with sides that will stand up to the sauciest of barbecues.

Quickly on its way to becoming a SF barbecue classic, this meat haven allows its inventive side dishes to shine bright alongside the mains. The chimichurri fries, in particular, tackle classic garlic fries and amp them up with chili oil, an aioli of sharp garlic, and bright parsley. Equally as popular (if not more) is the Frankaroni, which combines housemade hot dogs with mac and cheese, batters it all up, and deep fries it in true Southern tradition.

For vegetarians, sides at a barbecue joint become the basis of the experience, and here the options of vegetable sides will please both meat and vegetable eaters. Creamed spinach, sauteed okra, and corn on the cob served with cotija cheese and a lime are just some of the plethora of veggie sides at this divey barbecue spot that leave you wanting more. While Black Bark is getting serious attention for its meats and sauces, its vegetarian options deserve credit as well. The smoked portobello mushrooms put up quite the fight when paired next to the meats on the menu, and the sweet potato pecan casserole combines fluffy roasted sweet potatoes with nutty pecans for a perfect foil for all that meat. A classic Appalachian buttermilk biscuit (the size of a cat’s head — get it?) born of humble beginnings and simple ingredients is served hot out of the oven with crispy edges and buttery insides, paired with honey butter and pepper jelly. Also try the dandelion greens potato salad that is a lighter and almost refreshing take on the the dense and creamy potato salads that we’ve come to expect. While this kitschy joint has solidified itself as an SF barbecue staple, it’s the sweets at the end that deserve a shoutout. Creamy banana pudding layered with sliced bananas and vanilla wafers is a light cloud perfect to end the meal, while the nutty and sweet pecan pie stands alone as a hearty slice. So, hold off on the baked beans, and swap in this sweet treat as a side. Apart from the complimentary boiled peanuts which are worth asking for as a side all on their own, it’s the baked macaroni and cheese as a side that you shouldn’t pass up at Rusty’s Southern. Baked in a cast iron with gooey cheese and a crispy kale crust topping, it proudly (or sneakily) adds some green to the ‘cue menu. Fusion is a term that gets tossed around a lot in SF, but don’t be weary of the Southern egg rolls here, comically dubbed “Bumpkins.” Though at first glace they look like the Chinese favorite, these wonton wrappers are loaded with brisket, pimento cheese, smoked corn, and served with a side of blackberry barbecue sauce. Rooted in the ancestry of the South, grits are not only an important part of barbecue but a crucial part of Southern cuisine as a whole. At this Mission favorite you can choose from two versions of the staple ingredient. The Delta Grind cheese grits are creamy perfection, while the ham hock and cheddar grit cake is a crispy version of the classic side.